Munich is one of the most famous cities in Germany. Which city in Germany after Berlin should to visit? Most tourists find the answer to this question - it is Munich! Munich is the second popular among tourists city of Germany (the number of nights spent in hotels). There are a large number of museums and attractions. The most famous event is the annual Munich beer festival Oktoberfest. For lovers of shopping in Munich are many interesting places.

Munich is the third in the number of inhabitants city in Germany, after Berlin and Hamburg. The population of Munich is more than 1.4 million people. The city is located in southern Germany, on the river Isar in Bavaria. Munich is an important industrial center of Germany. Here is headquartered the world famous company "Siemens". BMW is one of the most famous car brands in the world. BMW plant is also located in Munich. Distance from Munich to Berlin, "a straight line" is approximately 500 kilometers. Distance from Munich to Paris is 690 kilometers to London - 920, to Rome - 700, to Helsinki - 1600, to Stockholm - 1310, to Moscow - 1960 (indicated by the distance in a straight line).

In 2010, the magazine Monocle named Munich as the most livable city in the world.

Munich has a temperate climate. Heavy frosts in Munich are quite rare in winter. The average temperature in January is about -3°C, snow is a little bit. Winter lasts from December to March. Summer in Munich, not very hot, the average summer temperature is about 17-20°C, often are rains and cloudy weather. Summer lasts from May to September.
Munich is situated near the northern border of the Alps. Mountains are strongly influenced by the weather in the city. The weather can change significantly in just a few hours.

Munich is an impressive mix of historic buildings and interesting architectural solutions. National Geographic Magazine has included Munich, among the most interesting historical cities in the world. 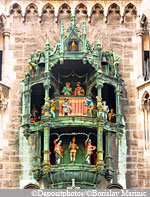 New Town Hall (Neues Rathaus). New Town Hall is located in the northern part of Marienplatz. In the town hall runs the city council of Munich, is an information point for tourists. Town Hall Tower has a height of 85 meters, is equipped with an elevator and opened for tourists.
Located on the tower glockenspiel (Rathaus-Glockenspiel) chimes with mechanical dolls. Daily at 11:00 am (as well as 12 and 17 hours in summer) mechanical chimes and dolls give their presentation. Puppet show at the Town Hall tower lasts from 12 to 15 minutes.

On the tower is located chimes and Rathaus-Glockenspiel with mechanical dolls. Daily at 11:00 am (as well as 12.00 and 17-00 in summer) chimes and mechanical theatre puppets artists performance stories to the amusement of tourists and locals. Puppet show at the Town Hall tower lasts from 12 to 15 minutes.

St. Peter's Church (Peterskirche, Alter Peter) is the oldest church in town, located next to Marienplatz. The church was built in the XII century on the site of the old wooden church on the Petersbergl hill. Presumably at that point began the construction of Munich.

The Frauenkirche (full name Dom zu Unserer Lieben Frau, "Cathedral of Our Dear Lady") is the highest cathedral in Munich. The height of its towers is 99 meters. Cathedral two towers are the symbol of Munich. City Administration prohibits the construction of buildings taller than 109 meters in the city center. Since 2004, this prohibition extends to other parts of the city. Due to restrictions of height the towers of the church are clearly visible. South Tower is open for those wishing to climb the ladder, and offers unique view on the Munich and the Alps. Address: Frauenplatz 1, Munich.

English Garden (Englischer Garten) is one of the largest urban parks in the world. The park is a favorite destination for city residents and tourists. English Garden in Munich larger by area than the famous Central Park in New York. The most interesting places in the park are: The Chinese Tower, Monopter, Japanese tea house, beer gardens. Well-known feature of the park is the fact that it allowed sunbathing nudists (allowed sunbathing without clothing in places Schönfeldwiese, Schwabinger Bucht).

German Museum (Deutsches Museum). Deutsches Museum in Munich is the largest museum of science and technology in the world. The museum contains about 28 000 exhibits that illustrate the development of science and technology. The museum is visited annually by more than 1,5 million people. Address: Museumsinsel 1, 80538 München. Metro Station Fraunhoferstraße, subway line U1 and U2.

Munich Airport is the second largest by number of served passengers the airport in Germany (after Frankfurt-am-Main). The airport is located 28.5 kilometers north of Munich. From the airport you can reach to the Munich city by train (S-Bahn). Train lines S1 and S8 depart from the airport every 20 minutes. A trip to the main railway station takes 40-45 minutes.

See also: information for lovers of skiing - popular ski resorts. Lovers of Alpine skiing often get to the ski resorts of Austria through Munich Airport.

Main Railway Station of Munich (München Hauptbahnhof) is located in the center of Munich. It is the largest of the three railway stations of the city. Station has 32 surface and 2 underground paths and is the largest train station in Germany by the number of ways. Passenger traffic is about 350,000 passengers per day Central Station Intercity-Express lines connect Munich with Hamburg, Berlin, Cologne, Paris and other cities in Germany and Europe.

Find flights and buy tickets to Germany online.
Places to stay (hotels, hostels, apartments).
How to get from the airport? Order a taxi right now.
Car rental (some prefer to book online).
Railway tickets - you can also buy online.
Here you can choose and book a guided tour in Munich.