Kazan Cathedral, also known as the Cathedral of Our Lady of Kazan, is located in the heart of St. Petersburg, on the Nevsky Prospect near the Gostiny Dvor department store, and Singer House. This is one of the largest cathedrals of St. Petersburg and one of the most famous sights of the city.

Certainly must go inside the cathedral. The interior of the cathedral is impressive. 56 columns of pink Finnish granite with gilded decorative elements are located inside the temple. Pay attention to the floor of the temple. It is made using different grades of marble, which create the original pattern on the floor.

Kazan Cathedral (Казанский собор) history is closely linked with the War of 1812. Military trophies were delivered here after the victory over Napoleon: 107 captured French flags and standards, 93 keys of fortresses and towns. Marshal Kutuzov, the commander of Russian troops in the war against Napoleon, was buried here. The bronze monuments of Russian generals Kutuzov and Barclay de Tolly was inaugurated on the square in front of the Kazan Cathedral in 1837. A significant part of the trophies is in museums now, but some items still hang on the walls inside the temple.

Architect Voronikhin is the author of the project of the Kazan Cathedral. A new church was supposed become similar to the St. Peter's Basilica in Vatican at the request of Emperor Paul I. The main entrance to the church should be in the west, and the altar on the east side of the building by Orthodox tradition. This means that the Kazan Cathedral located side to Nevsky Prospekt. Therefore, the main entrance to the Kazan Cathedral is not located on Nevsky Prospekt, but on the Bolshaya Meshchanskaya street. Architect Voronikhin came up with an original solution. He has built semicircular colonnade (resembling the colonnade in St. Peter's Square in Rome) attached to the side wall of the temple, on the Nevsky Prospekt side. This is what we see from the main street of the city. Cathedral itself is hidden behind the columns. The dome of the temple rises above the center of the colonnade.

Cathedral construction began in the middle of 1801. Consecration was carried out in September 1811. There was a church of the Nativity of the Virgin at this place before, which houses one of the most important shrines of St. Petersburg - the miraculous icon of Our Lady of Kazan. A new cathedral was build for this icon. It was named after Our Lady of Kazan icon. There was the museum of atheism and religion history in the church during the Soviet era. The Kazan Cathedral is back the main church of St. Petersburg today. 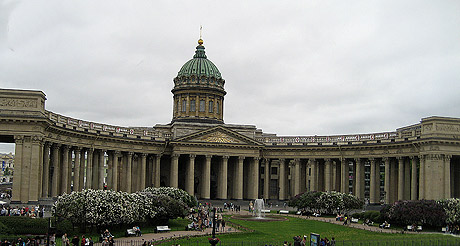 Dimensions and other information

The nearest metro stations: Nevsky Prospekt and Gostiny Dvor.
You can specify the location of the Cathedral on a St.Petersburg map.

There are located near the Kazan Cathedral in St. Petersburg: Bank Bridge, the Savior on the Spilled Blood church, the Russian Museum and the Mikhailovsky Theatre.