Trip to Sochi by car.

In Sochi, can be reached by plane or train. But there are many who want to go there in his car.

Federal Trunk highway M-10 "Russia" St. Petersburg - Moscow. The road passes through the territory of the Leningrad, Novgorod, Tver and Moscow Regions. The length of the highway about 700 kilometers. The road by car can take about 10 hours. Russia's government plans to soon build a high-speed toll road between the cities of Moscow and St. Petersburg. 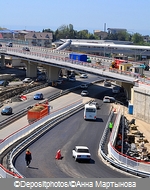 You can get to Sochi on his car. The total length of road approximately 1600 kilometers. Travel time from Moscow, about 18-20 hours.
During the trip, it is desirable to plan a stop for rest in roadside hotels. First, you need to go on the M4 motorway to the town of Dzhubga. The road to the village Dzhugba (for reviews of drivers) will not cause any problems. According to tourist hotels and gas stations on the road there is a sufficient quantity. Federal highway M4 Don. Passes through the towns of Voronezh, Rostov-on-Don, Krasnodar.

After the settlement Dzhugba must turn onto the road M27. The motorway M27 (Dzhubga - Tuapse - Sochi - Adler). This is the most difficult part of the path. After Dzhubga will Serpentine, mountain road. On a mountain road, you must be especially careful. Trucks can interfere with movement. In mountain areas should not make overtaking in places with poor visibility. The road from Sochi Dzhubga to take about five hours.

You need to be alert to the possibility that your car will stop for a police check. If you move at night, the car can stop and be carefully examined. This is done to our joint security, but such tests take time.

Currently in preparation for the Olympic Games are working on repair and reconstruction of the road. By 2014, the road has become much better. The introduction of toll stations.