Pushkin museum of fine arts in Moscow is one of the best art museums in Russia. The museum has collected a large number of works of European and world art. The museum building is an architectural monument. Pushkin Museum collection includes over 560,000 paintings, drawings, sculptures, works of applied art, archaeological monuments and numismatic items and fine art photos. The museum was opened in 1912. 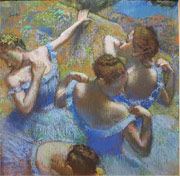 The museum's collections are constantly replenished. Paintings were transferred in the museum from the State Museum Fund, from some other museums (including the Hermitage Museum). After the Second World War, the Pushkin Museum received paintings from the Dresden Gallery (Germany), as well as the Treasure of Priam, Heinrich Schliemann found on the ancient city of Troy place. (Paintings were returned to the Dresden Gallery at the end of 20th century. Some derived from German museums exhibits have remained in a museum.) Works of such famous artists as Renoir, Van Gogh, Monet, Degas, Cezanne, Matisse and Picasso were also transferred from other museums in the Pushkin Museum.

Currently, the museum has a collection of Western art from ancient times to the beginning of the XX century. The museum also has a large library that contains books about art.