There are many objects under control of the “Moscow Kremlin” museum: cathedrals, churches, State Armory, the Patriarch's Palace, the “Ivan the Great” bell tower.

“Ivan the Great” bell tower (Колокольня “Иван Великий”) is located on the Cathedral Square of the Moscow Kremlin. Bell tower was the tallest building in Moscow until the beginning of the XVIII century. The height of the bell tower has been increased to 81 meters in 1600. It is an active church and museum now.

Faceted Chamber (Грановитая палата) is one of the oldest public buildings in Moscow, an architectural monument. The building was built in 1487 - 1491 years by order of Ivan III by architects Marco Ruffo and Pietro Antonio Solari. Faceted Chamber currently is one of parts Russian Federation President residence.

Armory (Оружейная палата) is a unique museum, located on the territory of the Kremlin. The museum has valuable objects related to history of the Russian tsars, history of Russia. There are belonged to tsar’s items, stored in the armory: ceremonial tsar's clothes, hierarchs of the Russian Orthodox Church clothes, gold and silver items and weapons. The building, which houses the armory, was built in 1851.

The Patriarch's Palace is an architectural monument of the middle of XVII century. The palace was built by order of Patriarch Nikon in years 1653 - 1655. Head of the Russian Orthodox Church had lived on the third floor. There were also rooms for receptions located on the second floor. The museum exhibitions are currently situated on the second floor of the Patriarch's Palace. The museum contains precious tableware, jewelry, antique furniture. The Twelve Apostles Church gilded iconostasis from the late 17th early 18th centuries, as well as an exhibition of ancient icons may be interesting for tourists in the Patriarch's Palace.

The Tsar Cannon (Царь-пушка) is situated on the Kremlin Ivanovskaya square, between “Ivan the Great” bell tower and the Twelve Apostles Church. The canon is the most outstanding work of Russian weapon skill. The gun was made in 1586 at the Moscow Cannon Yard. Cannon caliber is 890 mm, weight about 40 tons. Cannon barrel is made of bronze and decorated by frieze, ornamental bands and equestrian figure of Tsar Fyodor Ivanovich. A canons flitch was made of cast iron in 1835. Tsar Cannon was never used in combat.

The “Tsar Bell” (Царь-колокол) is situated to the east of Ivan the Great bell tower in the Kremlin. The bell is a famous monument of 18th century. The bell was cast in the 1733-1735 years. The “Tsar Bell” is the largest bell in the world. Bells weight is almost 202 tons, height 6.14 meters, diameter 6.6 meters. Tsar Bell was not raised to the bell tower. A strong fire had happened in the Kremlin May 1737. During fire, extinguishing water splashes onto hot bell metal and bell cracked. A piece weighing 11.5 tons broke from the bell. The bell was mounted on a pedestal as a model of casting art of the mid-19th century. Tsar Bell is an outstanding work not only for its size but also because of its fine decoration.

Tickets to the territory of the Moscow Kremlin and its museums are sold at the Kremlin ticket office. Ticket office is located in the “Aleksandrovsky Sad” park (Александровский сад, approximately in the middle of the park) near exit of the metro stations “Biblioteka imeni Lenina” and “Aleksandrovsky Sad”. It may be a long line at the ticket-office of the Kremlin during high season. 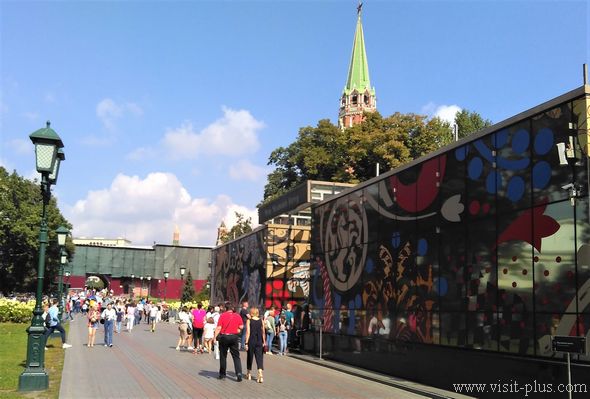 On the photo: ticket offices of the Moscow Kremlin museums. Entrance to the Kremlin is nearby.

The Internet provides a convenient opportunity to prepare for a trip without leaving home. Tickets to the Kremlin can be bought online as well.