“Tretyakovskaya” metro station (станция метро Третьяковская) is located close the famous “Tretyakov Gallery”, near the intersection of “Bolshaya Ordinka” and “Malaya Ordinka” streets with “Klimentovsky pereulok” street. The station is located at a distance about 1,5 kilometers to the south of the main attractions of Moscow - Kremlin and Red Square. Metro station “Tretyakovskaya” has two halls on two metro lines: “Kaluzhsko-Rizhskaya” line (line 6, orange line) (between the stations “Kitay-gorod” and “Octyabrskaya”) and “Kalininskaya line” (line 8, yellow line). Station “Tretyakovskaya” station is connected to “Novokuznetskaya" metro station of “Zamoskvoretskaya” metro line.

The station has two parallel halls which serve two subway lines. Halls are joined by a passage located midway along their length. At the station organized a so-called “cross-platform” transition scheme. One hall serves two metro lines in one direction. Going to the other side of the platform, you get to the other metro line. Care must be taken to get to your desired destination trains.

Station south hall was opened January 3, 1971, north hall opened January 25, 1986. In the design of the walls of the northern hall used portraits of famous Russian sculptors, artists and painters. Two station halls connected by escalators with a underground lobby which has access to the city through the underpass under “Bolshaya Ordynka” and “Klimentovsky pereulok” streets, to the State Tretyakov Gallery. 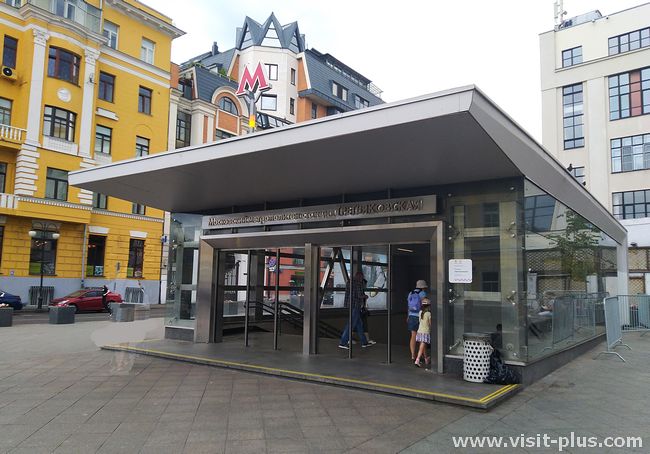 There are some places of interest, located near the metro station “Tretyakovskaya” in Moscow:

Hotels near the metro station Tretyakovskaya

There are several hotels near the Tretyakovskaya metro station and the Tretyakov Gallery in Moscow. If for some reason you are not satisfied with these hotels, you will certainly be able to find a suitable hotel or apartments nearby at an affordable price with the help of any online hotel search and reservation service.