Most popular theaters in Moscow 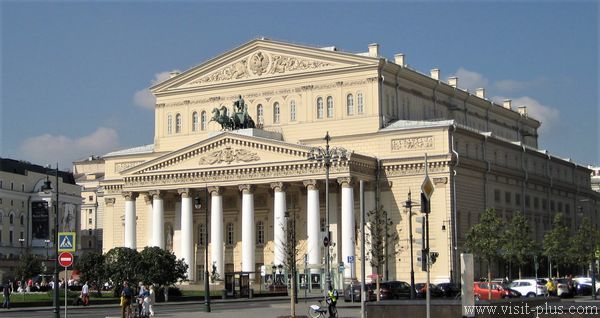 “State Academic Maly Theater of Russia” (Малый театр, literally Small Theatre) is one of the most famous drama theaters in Moscow. The theater is located in the city center, next to the “Teatralnaya” square. The theatre traces its history to the Moscow University drama company, established in 1756. Modern building of “Maly Theater” was opened October 14, 1824. The repertoire of the theater includes famous Russian authors’ plays.

“State Academic Moscow Operetta” theatre (Театр Московская оперетта) is one of the most popular musical theaters in Moscow. Moscow Operetta Theater was opened in 1922. The theatre repertoire contains both classic operetta and modern musicals.

Moscow “Helikon-Opera” (Геликон-опера) musical theater is one of the youngest opera houses in Moscow. The theater was founded in 1990. Best opera singers of Russia perform at the theater. “Helikon-Opera” theatre repeatedly became the winner of various professional competitions. The theatre repertoire consists the most well-known authors operas.
The main building of the theater is on the restoration. From May 27, 2007 all performances are held in the theater “Helikon on Arbat”, address “Novy Arbat” street, 11.

“Lenkom” Moscow State theatre (Ленком) is one of the most popular theaters in Moscow. “Lenkom” name comes from the theatre old name “Lenin Komsomol theatre”. Theatre has been founded at 1927. Many famous Soviet and Russian actors worked in the theater throughout the years. The theatre repertoire contains both the classics theatrical works, as well as works of contemporary authors. Theatre auditorium has 639 seats.

Moscow Chekhov Art Theatre is popular theater in Moscow. The theatre repertoire contains plays of famous Russian and foreign authors. Throughout the years in the theater worked many famous Russian actors.

Moscow Theatre for Young Spectators (Театр юнного зрителя, ТЮЗ) was founded in 1920. The repertoire of the theater was aimed for children and youth. How is published on theater website: Soviet specificity “theater for young audiences only” severely limited repertoire, and, consequently, the creative possibilities of directors and actors. Theatre marketing focus changed in 1987. Currently, most of the theater's plays intended for an adult audience. In the theatre auditorium are 603 seats.

“New Opera” theatre (Театр Новая Опера) is one of the youngest musical theaters in Moscow. “Novaya Opera” Theatre (New Opera) was established in 1991 and soon became regarded as one of the best opera houses in Russia. The theater's repertoire includes classical opera of Russian and foreign authors, the original performances divertissements, as well as XX-XXI century’s opera.
The theater is a winner of many awards: the National Theatre Award “Golden Mask”, Russian opera premium “Casta Diva”, the independent award “Triumph”, “Sony BMG Greece Award”.

Moscow theatre “Sovremennik” (театр “Современник”) was founded by a group of young actors in 1956. Since it foundation theatre was popular with the residents of Moscow. Of the more than a hundred performances staged at the theater for all the years of its existence, nearly two-thirds were written by the authors specifically for the “Sovremennik” theatre and were first plaid on it stage.

“Mossoveta” theatre (Театр Моссовета) was established in 1923 as a theater of the Moscow Province Council of Trade Unions. The theater has two scenes. The main hall of the theater has 894 seats, an additional hall has 120 seats for spectators.

State Academic “Vakhtangov Theatre” was established in 1921. Until 1926 the theater was called Third Studio of the Moscow Art Theatre. Since its inception, the theater was one of the most popular theaters in Moscow. The theater building is located in the center of Moscow, at famous Arbat Street.

“State Academic Central Puppet Theater named after SV Obraztsov” (театр кукол имени Образцова) is world's largest Puppet Theatre, a unique theater in Moscow. The theater is located in the city center on the “Garden Ring”. Theatre has been founded since 1931.
In 1937 in the theater was created puppets Museum. Its collection is considered as one of the best in the world. On the theatre building facade is located the unique puppet clockwork watches, one of the sights of Moscow.

Theaters location is marked on the Moscow map.