Main events of the Venice carnival

A large number of tourists come to the carnival in Venice. Many people buy a mask and become carnival participants. Artists from different countries perform in the streets and squares of during these days (street musicians, dancers). Something new appears in the carnival every year, but some events have become traditional and are held annually.

Contest for the best carnival costume and the mask 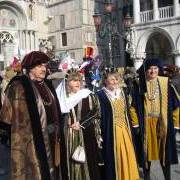 Contest for the best carnival costume and the best carnival mask is held during the carnival (Concorso della Maschera più bella). Big stage is built on the Piazza San Marco - The Gran Teatro. Contestants show off their costumes on stage twice a day. The costume should in some way reflect the theme carnival. Candidates for participation in the final competition are chosen from among the participants. Grand Final takes place on the last weekend of the carnival.

Anyone or group of people can take part in the competition. Conditions of participation may vary. The application must be submitted via the Internet beforehand for the contest. Registration opens about one month before the beginning of the carnival. For details ask at the official site of the carnival please.

Find out the dates of events for the carnival 2021.
See also: the most interesting events in Italy in 2020.

Flight of the Angel

"Flight of the Angel" (Il Volo dell'Angelo) is one of the traditional events of the Venetian carnival. There is a lot of unknown in the history of the show. According to one version, a young acrobat passed over the crowd along a tightrope from the boat pier on the Piazzetta to the bell tower in the middle of the sixteenth century. The show was repeated and modified many times later. Most often hanging from the rope man went down to the palace of the Doge. The show ended in tragedy in 1759. Acrobat fell to the ground. The show was banned. In one embodiment, made of wood pigeon descending on a rope (Flight of the Angel began flying pigeon). No fly was not for a long period of time later.

Flight of Angel was revived in 2001. New materials and technology has allowed the show to be safe. Usually, dressed in an angel costume person goes down on a rope over the cheering crowd from the San Marco bell tower to the square in the first festival Sunday the afternoon. As a rule, known athlete, artist, or the winner of the last year plays the role of an angel. (It must to be a brave girl to fly over the square along the rope.)

There are other flights at the Venice Carnival:

The Feast of Mary

Mary Festival (La Festa delle Marie) is one of the main events of the Venetian carnival. This colorful event is connected with the events that took place in Venice more than a thousand years ago. There are various legends explaining the origin of the holiday.

Perhaps the celebration of Mary began in the year 943. It is believed, that there was a tradition to help girls from poor families to marry in Venice. Brides collective blessing was held in San Pietro di Castello in the days of the purification of Mary (2 February). Twelve beautiful girls from poor families receive a dowry, collected through donations. Doge of Venice gave the girls beautiful jewelry and gold from the treasury. Different evens were held there in different parts of the city on these days.

Pirates rushing into the town and captured the brides with all the dowry in the 943 year. After some confusion, the Venetians organized a chase, caught the pirates in Caorle, liberated the girls and returned the stolen jewelry.

The decision to celebrate the day Mary was made in honour of the victory over the Pirates. The holiday begins with the selection of the twelve most beautiful girls in Venice (two from each district). Wealthy citizens helped the girls, giving beautiful clothes and jewellery. Girls walked (floated on gondolas) in the city, attending religious services in the major churches of Venice. After the 1272 festival gradually became less colourful for economic and religious reasons. It is believed that the festival of Mary ceased to be carried out after 1379.

Mary feast in Venice was revived after 1999 for the entertainment of residents and tourists. The selection of girls for participation in the festival starts a few weeks before the festival. The festival usually takes place in the afternoon on the first Saturday of the carnival. Twelve Marie in colourful, vintage costumes, accompanied by a long procession pass from the church of San Pietro di Castello to Piazza San Marco. The next day, there is an official announcement of the winner, so called Mary of the year.

According to the tradition, celebration of all the Venetians opens the carnival (La Festa Veneziana). The holiday is dedicated to residents and tourists. Festival is held over two days, on Saturday evening and during the day on Sunday. The festival program includes a tasting of Venetian cuisine and live music. Carnival boats parade is also held on Sunday. Events are held in the Cannaregio canal area.

Several costumed balls will be held in Venice during the carnival 2020. The entrance to such events is paid. You need to have (buy or rent) a suitable historical costume to visit the masquerade. (The dress code can be different on different parties.)

The program of the ball-masquerade usually includes: old and modern music, performances by artists, treats (food and wine). But the most important is communication with the same as you are carnival lovers from different countries. In most cases, you can also learn to dance an historic dance.

The number of tickets to parties is limited, so you should buy tickets in advance. You can do it online (on the Internet).

Learn more about about official and unofficial dinners and masquerade balls.

See also: the most interesting events in Italy in 2020.