Krasnaya Polyana is a village in the Adler district of the municipality of Sochi. The village is situated to north-east of the city of Adler, at a distance approximately 40 kilometers from the Black Sea coast, at an altitude of about 500 meters above sea level. It is located near river Mzymta. The Krasnaya Polyana village is known because it is located near several ski resorts (еhe best ski resorts in Russia) that attract alpine skiing fans from many cities of Russia in winter and spring. Competitions in some sports had been held near the village during the Winter Olympic Games in 2014. Krasnaya village Polyana can be reached from Adler and Sochi by railway (station Rosa Khutor), by bus or by car. 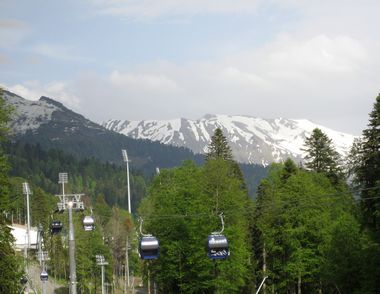 Mzymta River valley is surrounded by mountain ranges Psekhako and Aibga. Here are located Krasnaya Polyana and Esto Sadok villages. Here, on the slopes of the mountains, are a lot of cable cars and ski lifts. Most of the infrastructure located in the valley is relatively close to the railway station “Rosa Khutor”. The train also makes a stop at the station “Esto Sadok”.

Alpine skiing and tourism center "Gazprom" is (probably) the largest tourist and sports center in the region. Gazprom owns the ski complex "Alpika-Service" and the ski resort in the valley of Laura river (often called Laura - Gazprom). The cable car station “Alpika Service” is located at the entrance of the train station “Rosa Khutor”. It is easy to walk to the ski lifts and other facilities of the Gazprom mountain tourist center from the train station. After leaving the station you need to cross the bridge over the Mzymta river and turn left. The cable car station and cultural center "Galaxy" will be on the right (near the Laura river). The distance from the railway station is about 700 meters.

The ski complex "Gornaya Karusel" (Mountain Carousel) is located close to the Esto Sadok village, near the train station “Rosa Khutor”. Most of the ski center facilities are located on the northern slopes of the Aibga Ridge. The upper lift station is located at an altitude 2,200 meters above sea level. Distance from the train station to the cable car station is about 1.2 km.

Situated in the mountains tourist centers attract tourists not only in winter but in summer too. There are many who want to see the sites of the Olympic Games with own eyes, as well as a ride on a cable car to the mountains. (Not all cableways operating in summer.) There really are a lot of beautiful places.

To reach the sports and tourist centers is possible by train from Sochi and Adler (to railway station “Rosa Khutor”). To get to Krasnaya Polyana is possible also by bus. The bus №105 departs from the Sochi city bus station (located near the train station). Bus №135 depart from the shopping center “Novy Vek” in Adler town (with a stop at the airport).

You can see location of ski resorts and the village of Krasnaya Polyana on the map of Sochi.