Builders often want to make buildings beautiful, bright, with dissimilar to other houses. New Ohta district is ohe photo above. Houses made colorful.

Located to north of the subway station Parnas district looks different. All houses in the area (Severnaya Dolina residentinal area) are the same color, similar to each other. It seems that you can get lost among the huge neighborhood of identical houses. (Photo below.)

The picture of small part of the buildings to the north of the subway station Parnas. 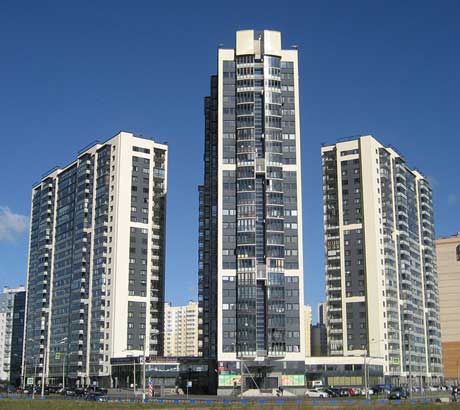 In the picture a few houses built by YIT.

In St. Petersburg, are preserved many old houses and old yards. In some of these houses are created large and comfortable apartments. In many homes there are communal apartments.

In recent years, rich people rarely buy apartments in these homes (because the old house, the old communication, poor neighbors). 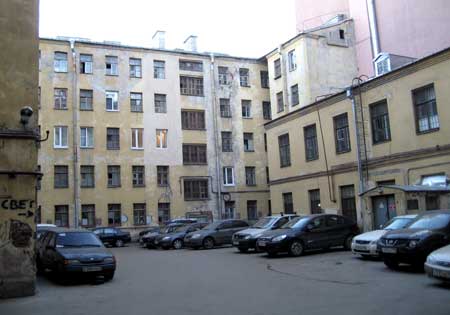 In the photograph is one of the courtyards in the Vyborgsky district.

Most of Saint Petersburg residents do not live in new buildings, but in ordinary multistory buildings buildings constructed during the Soviet era. In the same houses also live inhabitants of many other cities at the former Soviet Union territory.

In the photograph is ordinary five-storey building in one of the districts of St. Petersburg. Residents are trying to make their apartments more comfortable. Here you can find both comfortable (though small) apartment with a nice design and an apartment for many years have not seen decoration. (Traces of creativity can be seen according to the balconies.) 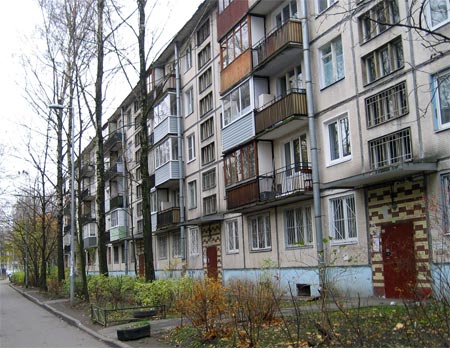