Cote d'Azur or the French Riviera is part of the Mediterranean coastline, located between the city of Toulon (east of Marseilles) and the border with Italy. This is a very popular resort region in Europe. Nice is the largest city of the French Riviera. There are also the cities of Cannes and Saint-Tropez on the Cote d'Azur, as well as the Principality of Monaco.

The Bay of Angels lies on the coast of the Mediterranean Sea, between the Mont Boron hill (in the east) and the mouth of the Var River (in the west). The city of Nice lies on the shore of the bay. On the west of the bay, near the mouth of the river, there is an airport. The most famous street of the city, Promenade des Anglais (or English Promenade), stretches from the airport along the coast to the east, towards the hill of Mont Boron. The length of the street is about 4.4 kilometers. There is a port to the east of the embankment, beyond the Old City and the hill.

Nice was founded by the Greeks in the middle of IV century BC and has a rich history. The natural beauty of Nice and its mild Mediterranean climate attracted the attention of wealthy people from the UK. It is believed that the Promenade des Anglais got its name due to guests from England. The city began to be popular with travelers in the 19th century. Nice was also a popular resort and among aristocrats from other European countries (which do not have their resort towns on the Mediterranean coast). Not only the rich and famous people can afford to spend their holidays on the Cote d'Azur now. It is not difficult and not too expensive: buy tickets for a plane or a train, book a hotel or apartment in Nice, enjoy a vacation on the beach in France.

Nice has a warm, Mediterranean climate. Summer is warm, dry and sunny. Precipitation is rare this season. The weather is getting cloudier and rainy by October. Winters can be described as cool days and nights (by local standards) and variable weather. Days can be both sunny and rainy. Frosts and snowfalls are very rare here. Spring begins cool and rainy, but the weather is starting to improve at the end of April, and it becomes warm and sunny by June. 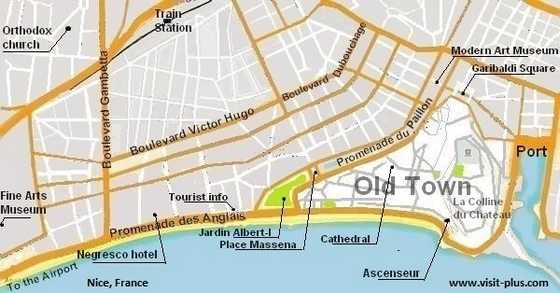 What to do in Nice

What do tourists in Nice do? The same as in any other resort city: walk along the embankment, spend time on the beach, visit the sights, visit museums, spend time in night clubs and casinos, go on excursions. In short, spend time with pleasure.

The Promenade des Anglais (or English Promenade) runs along the shore of the Gulf of the Angels. This is the most famous street in the city. The street runs from the airport in the west to the Old Town in the east. There are many restaurants, cafes, hotels along the street and close by. The embankment is the most popular place for walking. The main beach of Nice is also along the waterfront. (The beach is mostly pebbly.)

The Old Town of Nice (Vieille Ville) is one of the places visited by all tourists coming to Nice. The old town is in the eastern part of the city, between the port and the Promenade des Anglais. West of the port is a hill Colline du Château. The old town occupies a part of the hill area and stretches to Jardin Albert Park and Promenade du Paillon Boulevard in the west. Piazza Garibaldi square is located north of the old town. The length of the Old Town along the coast is about one kilometer.

Museum of modern and contemporary art (Musée d'art Moderne et d'art Contemporain, MAMAC) is located just north of the Old Town, near Garibaldi Square, about 700 meters from the seafront. It was opened on June 21, 1990. The museum presents works of art, created from the late 1950s to the present day by avant-garde artists.

The Museum of Fine Arts (Musée des Beaux-Arts de Nice) is located in the former house of Princess Elizabeth Kotschubey. The mansion was built in 1878 in the style of the Genoese Renaissance. The museum was opened as the "Palace of Arts of Jules Schere" on January 7, 1928. The permanent collection includes European art works of the 16th-20th centuries.
You can see the works of famous artists, such as Monet, Picasso and Degas.
The museum is located about 1.5 kilometers west of the Old Town, near the waterfront. Address: 33 Avenue des Baumettes, Nice, France.

Opera theater (Opéra Nice Côte d'Azur). You can visit the theater, during a vacation on the French Riviera. The building of the theater hosts opera and ballet performances, as well as concerts. The modern building was opened on February 7, 1885. Opera House is located in the old town, on the waterfront. Address: 4-6 rue Saint François de Paule, Nice, France.

The Cathedral of Nice (Basilique-Cathédrale Sainte-Marie et Sainte-Réparate de Nice) is located in the Old Town. The construction of the main part of the cathedral's cathedral began in 1650 and finished in 1685.

The park on the hill Colline du Château (Castle Hill) is one of the most popular places for tourists. From the hill you can see the port, the Bay of Angels, the beach and the embankment and the city. (The medieval castle itself does not exist anymore.)

You can climb the hill along several routes. For example, on the stairs from the embankment. There is also a lift (Ascenseur du Château), located at the joining of the street Rue des Ponchettes to the waterfront. You will find observation platforms there, from which a beautiful view of the sea and the embankment opens. You can make good photos (selfie) there.

Tourist mini-train «Petit Train» runs along the circular route around the Old Town. The train also visit the hill, where it makes a stop for 10 minutes. The train departs every 30 minutes (during the day) from Promenade des Anglais, next to the Jardin Albert park. You will see the most popular tourist places of the Old Town and see the Nice and the Gulf of Angels from the Colline du Châteaio hill, during a trip on this train.

The Principality of Monaco is located not far from Nice. Why do not you visit it during your vacation? You can get to Monaco by bus or by train.

Travel guides recommend tourists to take the bus route No 100 (Nice-Monaco-Menton), for a trip to Monaco. You will see many beautiful scenery during the trip. This is also important - this is the cheapest way to travel to Monaco. The bus stop is next to the Port (2018). The duration of the trip is approximately 45 minutes. (Note: the bus number 100X goes on a different route, the ticket costs a little more.) You can also get to Monaco by train ("Nice Ville" - "Monaco Monte Carlo").

This is a good alternative - to buy a guided bus tour to Monaco.

Most tourists buy one (or several) guided tours, during their travels. Tours can be very different: walking, biking, sightseeing bus tour or even by helicopter or yacht.

You can book a tours in Nice here.

Many tourists prefer to rent a car, during their trip. It's really very convenient. Car rental services are available at Nice airport, near the railway station, next to the Promenade des Anglais (near the Jardin Albert 1er park). The staff of your hotel will help you rent a car too.

But, we still recommend choosing and booking a car in advance, online.

How to get to Nice

You can get to Nice by plane, by train or by bus. The choice of transport depends on the place of your departure and your preferences.

Distance and time of flight between Nice and some cities:

It is most convenient by train to get to Nice from many European cities. Even a high-speed train is slower than an airplane. But you do not have to waste time on the way to the airport.

🚄 You will find here links to sites where you can find out the timetable and the cost of train tickets.

To reach the nearest cities of France and Italy, as well as in Monaco, you can also take a bus. Buses to many destinations depart from Terminal 1 of the airport.

🚗 If you want to rent a car, you can choose and book a car online.

The"Nice Côte d'Azur" airport is the third passenger traffic at the airport of France. It is located about 7 kilometers (4 miles) west of the city center, on the beach. Two airport terminals are located about 1 apart. You can get to Nice from the airport by bus (routes 99, 98). The T2 tram line should connect the airport to the city center in December 2018. The tram line will be extended to the port. The Nice-Saint-Augustin railway station is also close to the airport (closer to terminal 1). Most of the settlements located on the coast can be reached by bus. The helicopter line connects the airport of Nice with Monaco.

🚕 It is not convenient to travel by public transport if you have a lot of luggage or small children with you. You can take a taxi at the exit from the airport or book a taxi in advance here.

The port of Nice is in the eastern part of the city (east of the English embankment). It is also known as the port of Limpia. The port has a ferry connection to the island of Corsica.

Where to stay in Nice?

Which city district to choose for living, if you are going to visit Nice? We can give only general, well-known recommendations. Decide for yourself. Read customer reviews before you book a hotel.

The most popular places for tourists are the Old Town, the area west of the Old Town, along the English Embankment and north of the embankment to the railway station.

Many famous and luxurious hotels are located at the seashore, on the Promenade des Anglais. A beautiful view of the beach and the sea comes off the windows of the best rooms. This is a special place to stay. But, many tourists think that there are too noisy, too many cars.

Very good boutique hotels are available in the Old Town. This is a very convenient place for tourists. But the need to preserve historical buildings limits the possibility of creating comfortable living conditions.

You can choose a hotel or apartments located a short distance from the waterfront, if you prefer a quieter place or looking for more favorable prices.

We recommend that you choose these areas of the city, if you come to Nice for a few days. But more distant from the center of Nice hotels can also be a good choice if you plan to spend more time on the Cote d'Azur.

Learn more about booking a hotel in Nice.

Villefranche-sur-Mer is located east of the Old Town, next to the port. The resort town of Beaulieu sur Mer is in the next bay.

The resort town of Antibes is located about 15 kilometers west of Nice. A little further is the resort town of Juan-les-Pins and then Cannes. On the coast there are many good beaches and resort hotels.

Hotel, apartment or hostel you can choose and book here.