Hotel Cosmos was one of the largest and one of the best hotels in Moscow during the Soviet era. It remains a very popular place to stay for tourists in our days. Tourists can conveniently reach the city center by subway. Hotel Cosmos is also very well suited to those traveling to the VDNKh Exhibition ctnter or the Ostankino television center for business purposes. 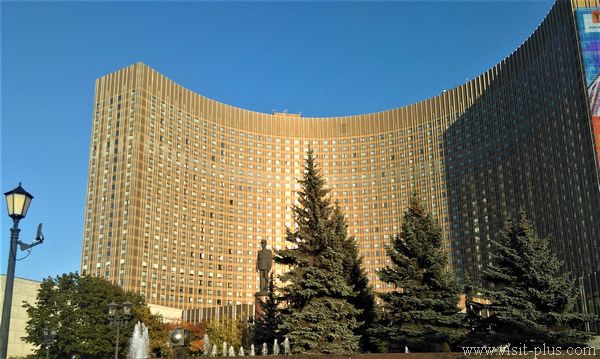 Hotel "Cosmos" is located near the Exhibition Center VDNH, at a distance of about 10 kilometers north of the city center (the Kremlin and Red Square). The distance to the Moscow Ring Road is about 9 kilometers.

The Cosmos Hotel was built to welcome foreign tourists who came to the 1980 Summer Olympics. It was opened in 1979. The hotel has repeatedly been the venue for major international and Russian events after the Olympic Games.

The hotel Cosmos has rooms that will suit different categories of travelers with different income levels and different wishes for comfort, including standard rooms and suites. The hotel also has restaurants, rooms for corporate events (conference rooms), a fitness center, a swimming pool and a sauna.

The hotel building has 25 floors. It is located near the intersection of the streets of Mira Avenue and Kosmonavtov Street.
The metro station VDNH is located about 400 meters from the hotel.
The main entrance to the VDNKh Exhibition ctnter is about 500 meters away from the hotel.
The distance to the Ostankino television tower is about 2 kilometers.

You can find out the cost of living, find out the rooms availability and read the reviews of tourists on the website of BookingCom.

Address: Prospect Mira, 150, Moscow, Russia.
The location of the hotel is marked on the map of Moscow.