Sochi is a city on Russia's Black Sea coast. Recently, the town became known worldwide as the venue for the Winter Olympic Games 2014. However, for the residents of Russia, it has always been an important and famous city (as a favorite place to go on vacation). Sochi is the largest resort city in Russia. Many residents of Russia wish to spend their vacation here.

Sochi is a popular resort

Sochi is one of the most popular resorts on the Russian territory. This is the only city in Russia with a subtropical climate. Every year the city takes up to 5 million tourists during the summer season only. Fans of winter sports come here to go skiing in the winter. (Ski resorts are located near Sochi, in the mountains, near Krasnaya Polyana village. There is a casino too.)

The tourist attractiveness of this region has been significantly improved in the preparation for the Olympic Games. New hotels, sports facilities, ski centers and an airport were built. People come here not only to lie on the beach and swim in the sea now. Sports, entertainment and business events are held regularly.

The warmest month of the year is August. The coldest months are January and February. Average monthly temperature in August in Sochi is 25-27°C. The average annual temperature of water in Sochi is 15,7°C. Most cold water is in February and March (8,6°C) and the warmest in August (24,1°C). In August, the water temperature can reach 29°C.

The ski season in the village of Krasnaya Polyana usually begins in December and can last until April (this depends heavily on the weather).

The swimming season in Sochi lasts usually from the third decade of May until mid-or late October.

You can get to Sochi by car, train or plane.

Information on the history of the city of Sochi

Based on archaeological excavations, it is assumed that the first people penetrated into the vicinity of Sochi about 400 - 350 thousand years ago.
Greek colonization of the Black Sea coast began at about VI-V centuries. BC. er. with the emergence of city states and lasted until about I at. BC. er.
Around the end of the XVI century, the Black Sea coast falls into the sphere of geopolitical interests of the Ottoman Empire and Russia. As a result, the Russian-Turkish war of 1828-1829 to the Russian Empire formally leaves the modern district of Sochi. In fact, Russia was controlled only part of the coastal zone.
The city of Sochi was founded in 1838 as Fort Alexander.
In 1917, Sochi was awarded the status of the city.

On vacation in Sochi

Sochi is the most popular resort in Russia for decades. This is not only due to the fact that there are very good beaches and good climate. One of the reasons is that not all Russian citizens have the opportunity to go on vacation abroad. (Almost no one could afford it in Soviet times.)

Among the shortcomings of Sochi can be noted:

But will we recommend you to visit Sochi? Of course yes! If you have already been to other countries and other cities, then you definitely should come here as well.

During the holiday you can visit other cities of the Black Sea coast. You can also make a trip to Crimea (by plane or by bus on a new bridge.) There is also an opportunity to visit Abkhazia. 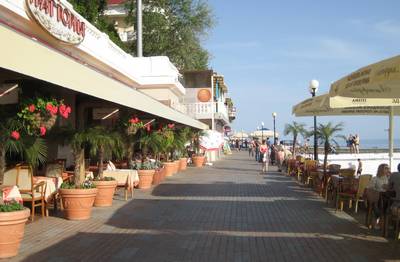 The location of these attractions and other interesting places you can see on the map of Sochi.

You can buy tickets for flight to Sochi online.

Oceanarium "Sochi Discovery World Aquarium" is the largest oceanarium in Russia. The total area of the oceanarium is about 6,000 square meters. Here are 30 tanks with a total volume of 5 million liters of water. In aquariums contains about 4 thousands of fish (more than 200 species of marine and freshwater fish).

"Riviera" park is most popular park in the city of Sochi. The park is located in the central part of the city on the right bank of Sochi River, near the sea shore. The park has a large number of trees of different species, several ponds, cafes and entertainment facilities for the public.

Arboretum in Sochi collected flora of the Caucasus and many other countries. Its total area is more than 49 hectares. There are about 1,600 species of plants in the park. On the territory of the arboretum is also a 150 cubic meters saltwater aquarium. You can see the various inhabitants of the Black Sea in the aquarium.

Dolphinarium is located in Adler city. Dolphin pool has a diameter of 2 meters and a depth of 6 meters. Dolphinarium hosts performances of dolphins and other marine mammals.

At Mount Big Ahune near Sochi there is a lookout tower. The tower offers a view of the Black Sea and the Caucasus Mountains. Tower height of 30.5 m

How to get to Sochi

Foreign tourists usually get to Sochi by plane. Direct flights to Sochi are performed from a small number of airports in Europe. Most likely you will have to buy tickets for the flight with an intermediate landing in Moscow, St. Petersburg or Riga.

You can come to Sochi also by train from Moscow and St. Petersburg, but this way will take you a lot of time. Perhaps this route is suitable for those who do not like flying on an airplane.
Tickets for Russian trains can also be bought online.

It is very convenient to use a taxi. (Although this is not the most deshovy form of transport.)
You can book a transfer (taxi) from the airport to your hotel even before departure, online.

The seaport of Sochi has 2 passenger berths with a total length of 330 meters. The seaport is able to receive passenger ships, ferries and cargo ships. During the tourist season in the passenger port offer trips by sea on ships of different sizes.

The railway station is located about 1.4 kilometers from the sea passenger station. Long-distance trains from many cities of Russia arrive at the station. From Sochi train station, you can also get to Tuapse, Adler, and also to the ski resorts near Krasnaya Polyana (Rosa Khutor station). There is also a bus station near the train station. 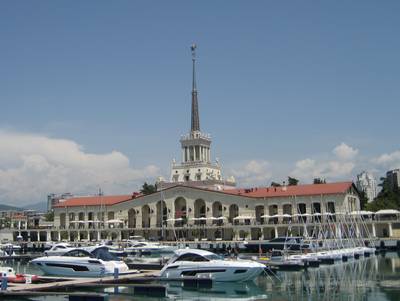 Places to stay in Sochi

The Black Sea coast is the most popular resort region in Russia. Therefore, there are many places to accommodate tourists. You can book a hotel room, a bed in a hostel or rent an apartment or a whole house.

Hotels that are located near the central beach in Sochi, can be considered as the most convenient for tourists (near the Marine Station). Hotels in Adler, next to the Olympic Park are also very popular too. (Choose these hotels if you go to sporting events held there, such as Formula 1 race.) Ski lovers usually stay in hotels in the Krasnaya Polyana village in winter.)

There are old health centers (sanatoriums) that were built during the Soviet times. These hotels continue to operate now. You can live in a hotel of any international hotel chain in any country. Maybe you should try something new now and settle in this old, Soviet hotel? Get acquainted with the architecture and culture of the USSR closer!

You can find and book a hotel room with any hotel reservation service. We can recommend a few useful links to you.

Get more information about hotels in Sochi and Adler.

Sochi (together with the village of Krasnaya Polyana, located 39 kilometers from Sochi) held Winter Olympic Games in 2014. The ski resort of Krasnaya Polyana was opened in 2007 and will have to take sports outdoors (skiing, downhill skiing, bobsled, etc.). At the same time in Sochi will host indoor (hockey, figure skating, skating, etc.). A large number of hotels and political support - the main argument, which gave the city an advantage over other candidates. Sochi will become the first city with a subtropical climate, which will be held the Winter Olympic Games.