The most significant buildings on the square are: “The Winter Palace”, General Staff Building with its famous arc, the “Alexander Column”. The “New Hermitage” with figures of Atlas at the entrance and “The Hermitage Theatre” are located a little to north from Palace Square.
Coming from the Palace Square to the south, you will come to the Admiralty, and then, through the "Alexander Garden", to St. Isaac's Cathedral, Senate Square and the "“The Bronze Horseman” monument. (Distance from Palace Square, about 750 meters.)

You can also go to the monuments and to the Cathedral from the Winter Palace along the Neva river embankment. Hydrofoils speedboats leave to Peterhof from the pier located near the square.

We strongly recommend going to the embankment of the Neva River after visiting the Palace Square. It offers a great view of the Peter and Paul Fortress and the Vasilyevsky Island. This is one of the most beautiful places in the city.

Palace Square is full of life from morning to night. There is a tsarist-term costumes dressed men and women who pose with tourists for photographs. Tourists can take a trip on the old horse-drawn coach. The square often hosts a variety of festive events and concerts.

You can specify Palace Square location on the tourist map of the city.

On the photos: The Winter Palace, Alexander Column, and the Arch of the General Staff building.

The most notable building on Palace Square

Winter Palace (Зимний дворец) is the oldest building on Palace Square. Construction of the palace begun in 1754 by architect Rastrelli project and was completed in 1762. At that time Winter Palace was the tallest residential building in St. Petersburg and it has 1500 rooms. The palace has a simple rectangular form. Colorfully decorated facade gives the building a solemnity and recognition. Light green façade has numerous white pilasters, with an extension of bronze statues and plates at the edge of the roof. The facade of the palace is decorated with columns, carved windows and statues. Richly decorated rooms are inside the palace. The largest museum of St. Petersburg - the Hermitage is situated in the Winter Palace. There is also the Hermitage Theater located near the palace.

The Alexander Column is one of the most famous monuments of St. Petersburg. It was mounted in the center of Palace Square by architect Montferrand in 1834. The column was established in memory of the victory over Napoleon army. The column is named for Emperor Alexander I of Russia, who reigned from 1801–25. Construction of the column lasted from 1829 to 1834. The main part of the column was made from a single piece of red granite, 25.45 m (83 ft 6 in) long, about 3.5 m (11 ft 5 in) in diameter and a about 600 tons weight. The total column height is 47.5 m. The granite monolith was obtained from Virolahti, Finland and in 1832 transported by sea to Saint Petersburg. At the top of the column is statue of an angel holding a cross.

General Staff Building is located on the Palace Square of Saint Petersburg. Building construction lasted from 1819 to 1829. Architect Rossi supervised Construction.
The General Staff building is known by the most visible part of the building - the Arch of the General Staff. The central part of the building consists of two wings with a 580 meters long bow-shaped facade. Architect Rossi, projecting the main square of the city, decided to link two wings of the General Staff building by triumphal arch. The Arch was built as a final piece in the composition of the Palace Square. At the same time, the Arch is a monument dedicated to victory in the war of 1812. 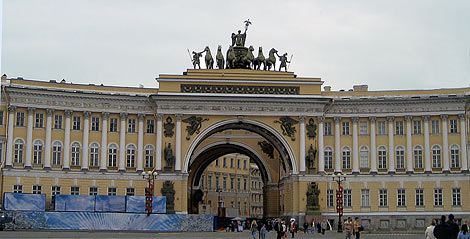 The arch is decorated by sculptural composition with a chariot in which harnessed six horses. Horses constrain two men dressed in Roman armor and armed with spears. The winged goddess Nike (Victory) stands in the chariot. The goddess holds a laurel wreath in his right hand. Sculptural composition is a symbol of military glory. Triumphal Arch of the General Staff building was opened on Oct. 24, 1828. The height of the Arch is 36 meters. The arch links Palace Square through Bolshaya Morskaya Street to Nevsky Prospekt.

How to get to the Palace Square

The best way to get to the Palace Square of St. Petersburg is subway (metro). The nearest metro station “Admiralteiskaya” is located at a distance approximately 200 meters from the square. Pass along the Malaya Morskaya Street to the Nevsky Prospect and turn left in the direction of the Admiralty. Palace Square will be on your right.