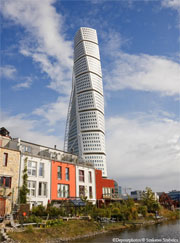 Malmö is the third largest city in Sweden by number of inhabitants (after Stockholm and Gothenburg). Malmo is the southernmost city in Sweden. It is located about 600 kilometers from Stockholm and about 30 kilometers from the capital of Denmark, Copenhagen. In 2001, the city of Malmo was ranked in fourth place in the greenest cities in the world ranking by GristMagazine.

The Swedish city Malmo is separated from the capital of Denmark Copenhagen by Oresund strait. Øresund Bridge (Öresundsbron, Øresundsbroen) and Drogden tunnel connects the two cities and two countries. Bridge construction was completed in 1999. The bridge is 7845 meters long. The Peberholm Island connected the bridge with the tunnel. Drogden tunnel (Drogdentunnelen) length is 4050 meters and it connects the Øresund Bridge to the land territory of Denmark.

The population of the city Malmö is about 280 000 people. Approximately 40 percent of the city's population is immigrants or children of foreigners who came to Sweden. Among living in Malmo immigrants’ largest number have arrived from Iraq, Denmark, the former Yugoslavia, and from Poland. Malmö is a young city. Almost half of the population is under the age of 35 (48%).

Malmo City is one of the major cities in Sweden. The city often is seen as part of the Oresund region. Oresund Region (Øresundsregionen, Öresundsregionen) is a multinational region, located on the shores of Oresund Strait. On the shores of the Strait are two major cities: the capital of Denmark, Copenhagen and the Swedish city Malmo. This is the most populous region in Scandinavia with a population of approximately 2.5 million people. Two cities, two countries are linked by active business relationships. Many residents work in Sweden, Copenhagen, have fun and go shopping in the capital of Denmark. Many residents of Denmark are buying real estate in Sweden.

According to statistics, in 2011, Malmo attended by more than 1.5 million people who have spent at hotels, hostels and camping sites near the city of 3.3 million nights (an average of 2.2 nights per trip). Also, tourists made more than five million day trips to Malmo (travel to work and study is not included in this number). This number can be added tourists who come to Malmö for one day or in transit.

Most of the approximately 80% of trips made themselves residents of Sweden (domestic tourism). In recent years, Swedish citizens made an average of over one million visits to Malmö in the year for more than one day. They spent in hotels in Malmo in 2011 about 2.6 million nights.

Among the tourists most are Germany, Denmark, Great Britain, Norway and the United States residents. Foreign tourists can be divided into three groups. Approximately 328,000 nights in 2011 were held in hotels. About 420,000 nights by foreigners coming to Malmo spent with friends and relatives. Foreign tourists made 1.2 million day trips to Malmo.

There are hotels the world's best hotel chains for those who like to travel with comfort: Marriott Renaissance Malmo Hotel, Radisson Blu, Hilton Malmo City.

There are also enough mid-priced hotels. To search and book hotels in Malmo, please use this service.