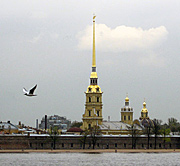 Peter and Paul Fortress is one of the most famous sights of St. Petersburg. This is one of the most visited places in the city. Peter and Paul Fortress is the place from which the city construction began. It is the historic city center. Fortress is the first object which was built by the order of Peter the Great. The day of the fortress construction beginning considered the birthday of the city. Distance from the fortress to the Palace Square is about 1.1 kilometers (in a straight line).

Peter and Paul Fortress are located on Hare Island, which is located at the widest point of the river, near the right bank of the Neva River. It is separated by the Kronverksky Strait from Petrogradsky Island to the north. The island is connected to the shore by two bridges. The island is about 750 meters long and about 400 meters in width. The distance from the island to the Baltic Sea is about 6.5 kilometers.

The fortress was by Peter the Great on May 16, hereafter indicated using "(J)"; May 27 by the Gregorian calendar)

The fortress was founded May 27, 1703 (at that time it was on May 16 by the Julian calendar). It was a joint plan of Peter I and the French engineer Joseph Lambert de Guerin. As it was planned by Peter I, Peter and Paul Fortress was supposed to protect the projected capital from a feared Swedish counterattack. Originally the fortress was "fill timber" (wooden structures frames were filled with earth and stones). Later, the fortress was rebuilt in 1706-1740. Fortifications were built of stone.

A flag is raised on the Flag Tower of Naryshkin bastion. It is visible from the opposite bank of the Neva River. Fortresses flag raises on flagpoles of sea fortresses according to an old tradition (flag of maritime fortresses). The figure of fortress flag is identical to a jack in Russia (on a red background vertical white cross on which is superimposed a blue diagonal cross, edged white stripe).

The Peter and Paul Cathedral is situated in the center of the fortress. This is the most significant building of the fortress. Its bell tower with its gilded spire has height of 122.5 meters. It is still the tallest building in the city center. The cathedral is the burial place of all Russian tsars from Peter I to Alexander III, with the exception of Peter II and Ivan VI. 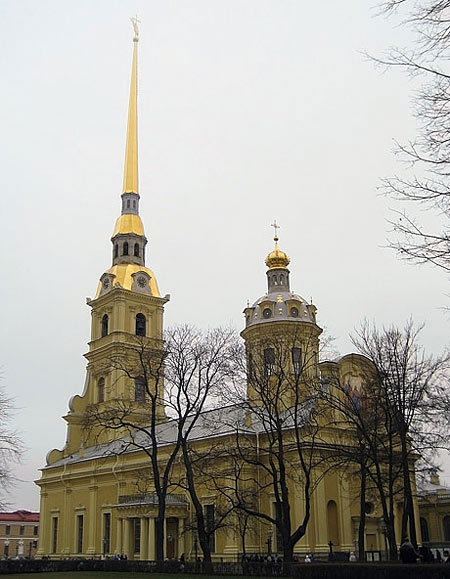 Peter and Paul Fortress was never used for its intended purpose. For some time it functioned as a prison for political prisoners.

The city authorities decided to destroy the Peter and Paul Fortress and build a stadium on its place in 1925. Fortunately, this decision has not been implemented.

Peter and Paul Fortress is part of the Museum of History of St. Petersburg. This is one of the main attractions of the city. It has become a tradition that midday shot made by signal cannon every day at noon on the fortress Naryshkin bastion.

Various interesting events are often held on the beach near the Paul Fortress in the summer. The museum of astronautics and rocketry is also located in the fortress. It is easy to get to the cruiser Aurora and Cabin of Peter the First from the fortress. Fortress offers a beautiful view of the Winter Palace, the River Neva and the Vasilyevsky Island. 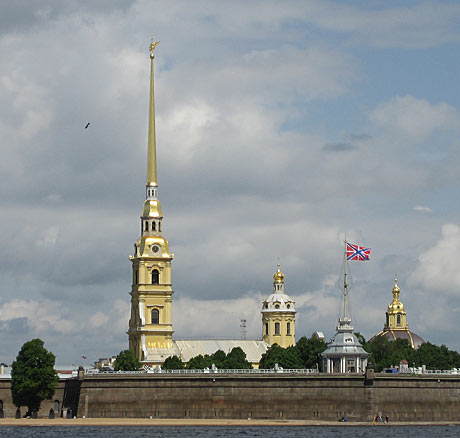 How much cost the entrance to the fortress?
Access to the fortress is free. Tourists must buy a ticket to get to the museum and the Peter and Paul Cathedral.

Where is possible to eat near the Peter and Paul Fortress?
There are many cafes and restaurants near the fortress. Quick bite can be, for example, in the popular "Burger King" cafe, which is located on the way from the subway station Gorkovskaya to the fortress.

You can check the Peter and Paul Fortress location on the map.