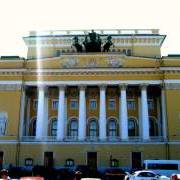 Alexandrinsky Theater in St. Petersburg is the first permanent public theater in Russia. It was established by the decree of the Senate, signed by Peter the Great's daughter the Empress Elizabeth, Aug. 30, 1756. Originally, the theater was called the "Russian theater for representations of tragedy and comedy". Since 1759, the theater got the status of Court Theatre. For a long time, the theater's artists acted in various theatrical spaces.

The theater gets a building created by architect Karl Rossi august 31, 1832, through 76 years after the organization of the troupe. The building is one of the great landmarks of St. Petersburg made in the Empire style.
Since 1832 the theater was renamed as "Alexandrinsky". The theater was named after the wife of Emperor Nicholas I Alexandra Feodorovna.