Peterhof is one of the most popular, beautiful and attractive places for tourists in the suburbs of St. Petersburg. If you will be in St. Petersburg in the summer, then you definitely need to find time to visit the park with beautiful fountains and Peterhof Palace.

Peterhof is a small town, suburb of St. Petersburg. It is located on the shores of the Gulf of Finland, at a distance about 30 kilometers south-west of the center of St. Petersburg. The population of the town is about 78,500 people.
Peterhof got its name from the German word Peterhof - "Peter's Court". From 1944 to 1997 the town was called "Petrodvorets".

Peterhof was founded in 1710 as the emperor's country residence. It received the city status in 1762. There were villages Kuusoja and Pohjajoki on the place of Peterhof on the coast of the Gulf of Finland prior to the beginning of the XVIII century. The most famous town landmark is the "Peterhof" museum. 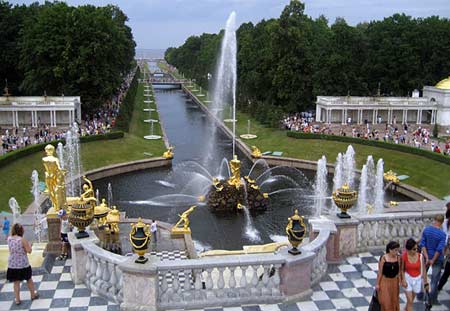 Sea Channel view of the in Peterhof from the Grand Palace is shown in the picture.

The most interesting place for tourists (in summer) in Peterhof is "Lower Park". Lower Park has an area about 102 hectares. The park stretches from west to east along the coast of the Gulf of Finland by 2.5 kilometers. Its width from north to south is about 500 meters.

The main decorations of the park are its fountains. "Grand Cascade" fountain is situated in the central part of the park, in front of Grand Palace. "Sea Canal" is laid from the Grand Cascade to the coast. The canal divides the park into two parts. "Adam" and "Eve" fountains, "Chess Mountain" and "Gold Mountain" fountains cascades, Monplaisir Palace and Hermitage Pavilion are located at the equal distance from the canal on both sides of the park. "Oak" and "Umbrella" fountains are children's favorites. The most famous fountain in the park is "Samson tearing the lion's mouth" named fountain. 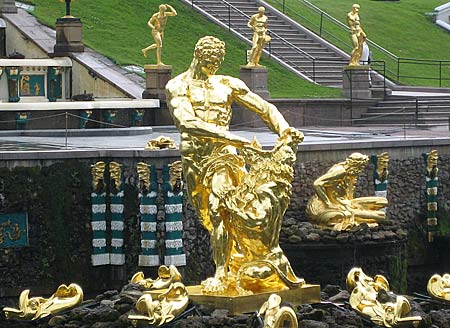 The sculpture "Samson tearing the lion's mouth" is shown in the photo (water off).

How to get to Peterhof

The most convenient way to get to Peterhof is by boat or by bus.

Sea transport departs from the pier on Palace Embankment 18 (near the Winter Palace in St. Petersburg).

By car - check place location on the map. There is a paid parking, but free parking is also available.