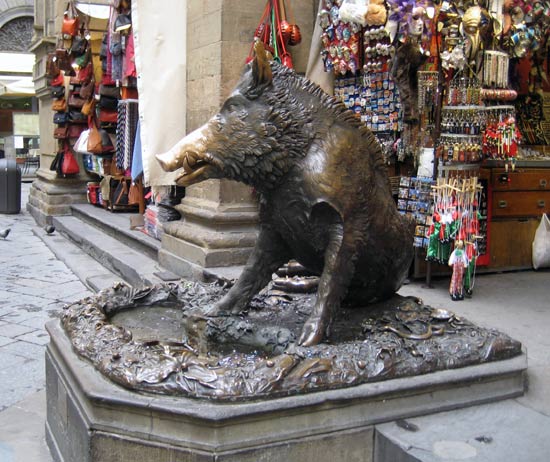 "Wild boar" fountain (Fontana del Porcellino) is one of the most popular attractions in Florence (Tuscany, Italy). Almost every tourist is coming to this fountain. The fountain is a bronze sculpture of a wild boar. From the open jaws of the beast flows water.

It is said that boar brings good luck and can fulfill wishes. You need to put a coin in the mouth of the boar. And if a coin falls into a grid (get to Municipality of Florence), then your wish will be granted. Do not forget to rub the boar's nose.

The fountain is located in the heart of Florence, close to the small market (Mercato Nuovo), close to the famous bridge "Ponte Vecchio". There are always a lot of tourists.

The figure of a boar was made by the sculptor Pietro Tacca presumably in 1634. As an example sculptor used the ancient Roman marble statue depicting the Greek myth of the boar. On the square is now installed a modern copy. The original is in a museum (Museo Bardini).

Visiting fountain tradition was known many years ago. For example English traveler Tobias Smollett wrote about it in 1766.