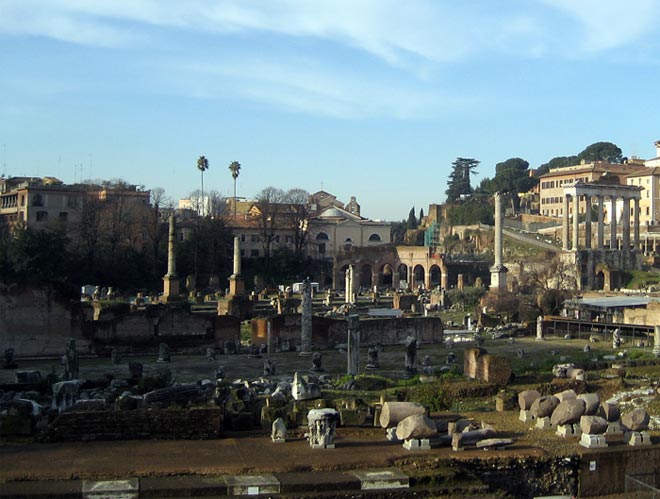 Roman Forum (Foro Romano) is one of the most famous places in Rome. For several centuries, from the beginning to the decline of the Roman Empire, it was the center of social life in Rome. It was the market and daily communication place for residents of the ancient city. They called it the “Forum Magnum”, or simply Forum.

The ancient Rome was located on the hills. Palatine Hill (Mons Palatinus, Palatium) and Capitol Hill (Capitolium, Monte Capitolino) were settled in the first place and played a central role in the life of ancient Rome. Between these hills was located Roman Forum.

Originally it was a swampy area between two hills. Around 7th century BC, this area was drained. Here was built sewer system (Cloaca Maxima), and the area was suitable for commercial use.

Located in a convenient area this place became actively built. Initially, there was built a market, later was built Roman Assemblies, the Curia (the seat of the Senate), and then a lot of other buildings. In the Roman Forum people met to discuss news, make political decision, to conclude commercial contracts. Up to about the 4th century AD, the “Roman Forum” was the most important place of social life in Rome, and perhaps in the world. At the Forum area was located so-called “Umbilicus urbis” (Navel of the City of Rome) a small temple, which was considered the center of the city and the Roman Empire.

Currently, in the Roman Forum are few evidences of its former greatness. On the photo are clearly visible columns, the remains of the “Temple of Saturn”. There are three pillars on the left - all that remains of the “Temple of the Dioscuri”. At the foot of the Capitol Hill you will see the, the “Triumphal Arch of Septimius Severus”, through which laid a “Sacred road” (via Sacra), linked the Palatine Hill to the Capitol.

The Roman Forum is located close to the main attractions of Rome - the Coliseum amphitheater. Entry to the Forum is paid. It is located next to the Colosseum (single ticket to the Coliseum, the Palatine hill and Roman Forum). The photo was taken from the “Via dei Fori Imperiali” street in February 2013.

See the “Roman Forum” location on a map of Rome.