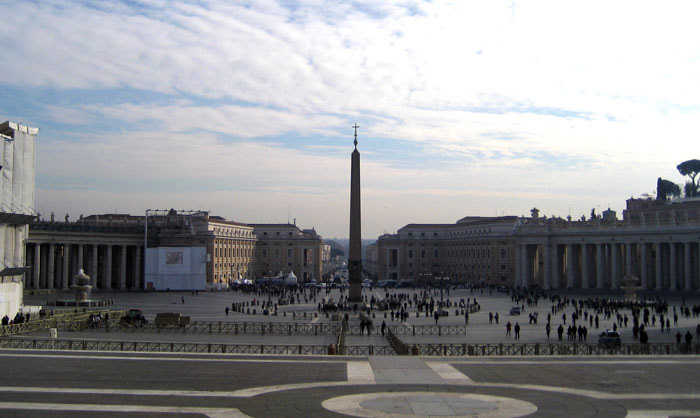 St. Peter's Square (Piazza San Pietro) is one of the most visited and most frequently shown on television place in the world. Square is located in front of St. Peter's Basilica in Rome. There always are a lot of tourists who visit the Cathedral and the Vatican Museums. On the square often gather believers to see and to hear the Pope.

The square was designed by Giovanni Bernini in 1656-67 years. Square has an oval shape. Along the edges of the square are located semicircular colonnades. In the center of the square is located an ancient Egyptian obelisk, which was brought to Rome by Emperor Caligula. It is believed that first the obelisk was in Nero's Circus, in which was executed apostle Peter. (It is believed, that on this place was later built the Basilica of St. Peter.) Obelisk was set to its current location in 1568.

Square is part of the Vatican, but the policing and security in the area provides the Italian state. In the square banned all public events except religious.

St Peter's Square is located on the right bank of the Tiber River, at a distance of about 500 meters from the “Ponte Vittorio Emanuele II” and the “Ponte Principe Amedeo” bridges. From the square to the river Tiber and Castel Sant'Angelo is street “Via della Conciliazione”. The nearest metro station is “Ottaviano San Pietro - Musei Vaticani”. Metro station located at a distance approximately 800 meters from St. Peter's Square.

The photo shows a view of St. Peter's Square from the Cathedral. There is also a photo of the St. Peter's Basilica made from the square.

See the St Peter's Square location on a map of Rome.