One of attractions of St. Petersburg is the ancient Egyptian sphinxes. Two sphinxes are in a beautiful location on Vasilevsky Island, on the banks of the Neva River (near the “Blagoveschensky” bridge). It is on the waterfront with beautiful views of Winter Palace and St. Isaac's Cathedral, which are located on the opposite bank of the river.

Sphinxes were made about 3,500 years ago. They were installed at the entrance to the near Thebes temple in Egypt. The temple was built for the Pharaoh Amenhotep III. The heads of sphinxes are the portraits of this Pharaoh. Sphinxes made of Siena mineral.

Sphinxes were brought to St. Petersburg from Egypt in 1832 at the initiative of the Russian imperial court chamberlain Muravev. Sphinxes were installed at the Neva river “Universitetskaya” embankment in 1834. 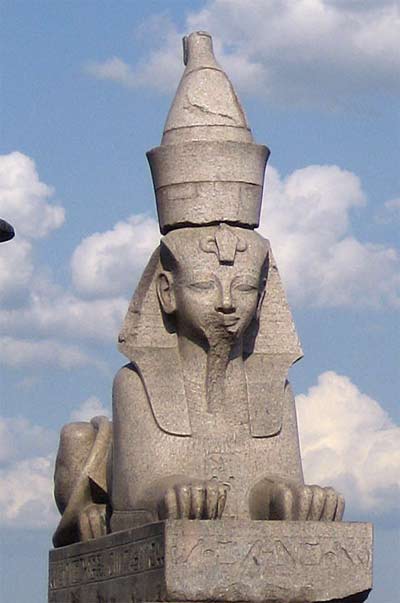 Where it is possible to see real Egyptian sphinxes? For this enough to come to St. Petersburg. Photo of the sphinx on the waterfront in St. Petersburg.

The map shows location of the sphinxes.
It is best to go to this place from the metro station Vasilyeostrovskaya.