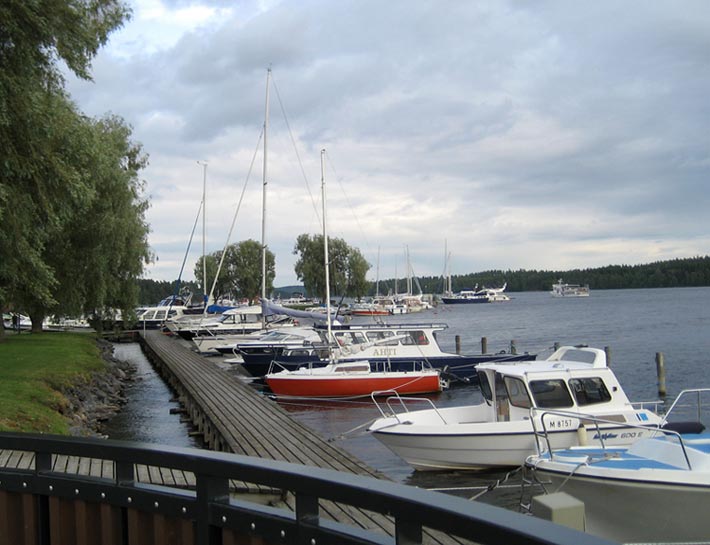 Lake Saimaa is actually a system consisting of a large number of interconnected lakes (Saimaa Lake system). The coastline is 14,850 kilometers long. There are approximately 13,710 islands in Saima. On the shores of the lake are some cities: Lappeenranta, Joensuu, Mikkeli, Imatra.

The Saimaa Lake carries a lot of passengers and cargo in navigation time. Through the Saimaa Canal from lake is possible to get to the Baltic Sea, St. Petersburg, Helsinki and other European cities. The photograph shows a pleasure boat Elvira, as well as tow Jermac, pushed a barge Annushka (not very Finnish names).

The steam tugboat Ahkera is parked next to the museum. The tug was built in 1871. The tug was used until 1958 in various cities in Finland. The tugboat steam engine works with wood. In 2002, the Stora Enso company gave tugboat to Savonlinna city.

Savonlinna passenger port (Savonlinnan Matkustajasatama) is located in the city center, close to the Market Square (Kauppatori), and close to the main attractions of the city Olavinlinna castle. Passenger terminal serves passengers on Lake Saimaa, between settlements Lappeenranta, Puumala, Savonlinna, Kuopio, Punkaharju in summer. Also cruise ships depart from the pier and tourists can take a trip around the lake Saimaa. Steamboat «S/S Heinävesi» is located at the pier and operates as a hotel.

The depth of the passenger port is 2.4 meters. There is also a deeper port with a depth 4.2 meters. The port of Savonlinna connected to the Baltic Sea through the Saimaa Canal.

Savonlinna is one of the most attractive cities on the shores of Lake Saimaa. Tourists come here not only by cars, but also by water, on boats and yachts. The city has several guest moorings. The cost of placing boats is up to 20 euros per day (2013).