Crete (Κρήτη) is one of the most popular summer holiday destinations for tourists from many European countries. It is the largest of the Greek islands, the fifth largest island in the Mediterranean Sea. Crete is the southernmost of the major islands of Greece. The distance from the island to the mainland of Greece is about 110 kilometers, to Turkey 175 kilometers, to Africa 300 kilometers. The administrative center of the island is Iraklion city.

Crete has a well-developed tourism infrastructure. There are comfortable hotels offering the best living conditions, small family hotels and apartments for rent on the island. Wealthy residents of some European countries buy properties here to stay during holidays and after retirement. The largest number of tourists comes to Crete in the period from April to October.

Your can see Crete location on the World tourist destinations map.

Size of the Crete island.

Crete is mountainous island. There are many gorges, caves, mountain plateaus and small plains on the island. Climate in Crete is primarily Mediterranean. Weather on the island is with mild, rainy winters and hot dry summers. Snow falls in the lowlands are very rare. The average air temperature ranges between 25 and 30 Celsius degrees in summer. On the southern coast are higher summer temperatures and milder winters.

Crete has a well-developed network of roads and regular urban and intercity bus service. Crete's main highway runs through the whole island along the northern coast, connecting the major cities (from Kissamos in the west to Vai on the east).

The island has three airports (two of them are international, one serves local lines).

The most popular tourist attractions are: 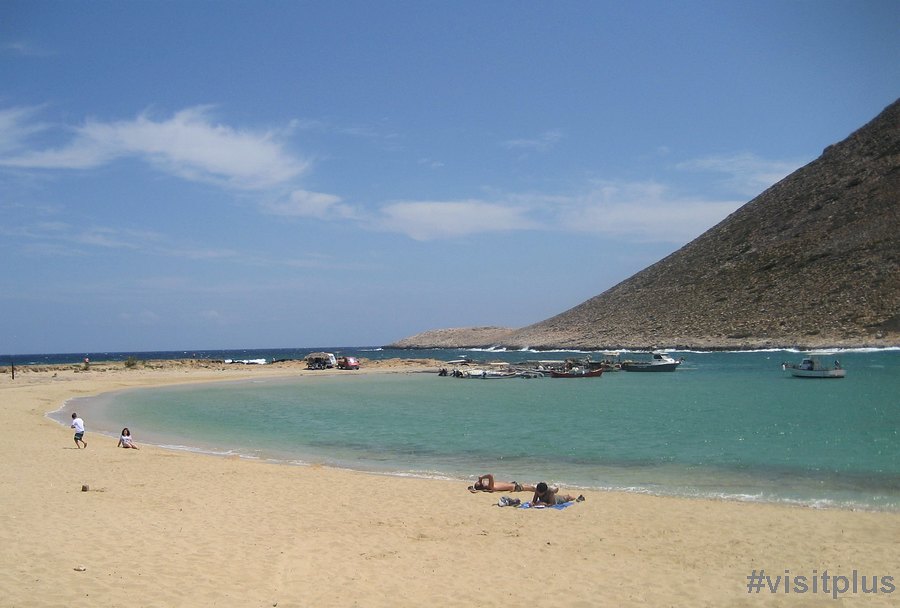 About 623,000 people live on the island. Most of settlements are located on the northern coast of the island. The largest town on Crete is Iraklion (population 275 thousand people), Chania (59.9 thousand), Rethymnon, Ierapetra, Agios Nikolaos (19.7 thousand), Sitia (9 thousand).

Heraklion or Iraklion city is the largest settlement on Crete, the administrative center of the island. Heraklion is located on the north coast, in the central part of the island. The city has more than 170,000 residents. Near the town (about 5 kilometers to the east of the city) is an international “Nikos Kazantzakis” airport. Iraklion Airport serves a large number of tourists arriving on the island. Port of Iraklion city has ferry service to some of the cities of Greece mainland and some islands (Santorini, Ios Island, Paros, Mykonos, Rhodes, Athens).
The city and its surrounding area have many interesting places for tourists: the Palace of Knossos, the Venetian fortress (Rocca al Mare), the old harbor, the archaeological museum, churches of different periods of construction, the mosque. 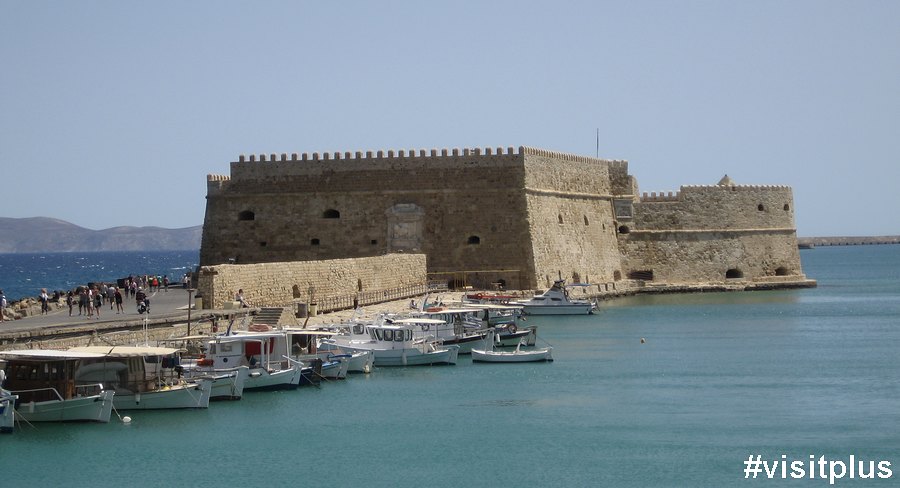 In the photo: the fortress of Heraklion.

Chania is the second largest city on the Crete island. The city is situated on the northern coast of the island, at a distance of about 145 kilometers to west of the Iraklion. Distance from the city to the western point of the island is about 40 kilometers. The history of the city has more than three thousand years. Old town, promenade and harbor are considered as major tourist attractions of the Chania city. The central part of the old town is named Kasteli. Nearby is a popular tourist destination - “Eleftherios Venizelos” square. At a distance about 45 kilometers to south of the city, there are “Samaria Gorge” gorge and “Lefka Ori” national park. The city has more than 55 thousand inhabitants. Near the city is an international airport. Not far from the city center (7 km), is located the Souda passenger port. 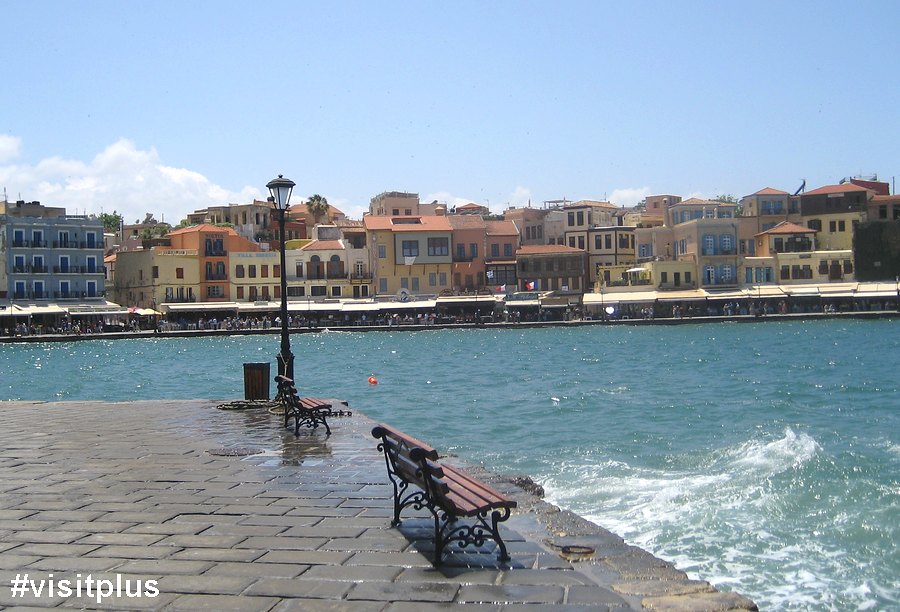 In the photo: old Venetian harbor of Chania town on Crete island, Greece.

Rethymnon (Ρέθυμνο) is located on the northern coast of Crete, at a distance of about 70 kilometers west of the Iraklion city. Currently Rethymnon is a popular tourist destination. There are many beaches and hotels near the town. Close to the promenade and the Old town are located cafes and pedestrian zone. Venetian fortress is the main attraction.

Ierapetra has been included into the list of “50 most beautiful places in Southern Europe”. Old Town and the waterfront are popular places for tourists. The main shopping street is Koundouriotou. There are several beautiful mountain gorges near the town. Located next to the city beaches are among the best in Europe. In 2012, the city became one of the winners of “Gold Quality Coast” award.

Crete attracts not only beach lovers. The island has left its mark in the history of Europe. More than four thousand years ago on the island emerged first in Europe Minoan civilization. It is believed that the palace in the ancient city of Knossos was the first such structure in Europe. In Knossos palace for the first time in the history of mankind are applied engineering and architectural solutions, such as high-rise buildings, natural and artificial lighting, water supply and drainage, ventilation, heating, paved road.

Crete has left a trace in the Greek myths and literature. According to a legend, here, in the Knossos city, in the King Minos palace, lived the Minotaur. Here come heroes of Greece Hercules and Theseus. From this island get term Ariadne's thread. This island is home to the ancient Greek god Zeus. But if these words nothing means for you, come to Crete just sunbathing and swimming.