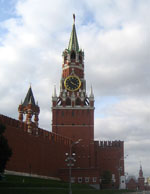 The Moscow Kremlin is one of the most recognizable landmarks of Moscow. For many years, the “Moscow Kremlin” was the center of the state and the center of power of Russia. The Kremlin is the residence of the President of the Russian Federation now. It is the most visited place in Moscow along with the Red Square.

The Moscow Kremlin is the oldest part of the Moscow city surrounded by a fortress wall. It is located on the left bank of the Moskva River, on the Borovitsky hill. The first fortress on this place was built in the 11th century. Originally it was simple wooden fence with guard towers. The wooden walls were replaced by white-stone walls in 1367 (during the reign of Dmitry Donskoy). Moscow Kremlin walls were rebuilt in the second half of the 15th century (during the reign of Grand Prince Ivan III). Construction work was carried out under the supervision of Italian architects. Red bricks had been used in construction of walls and towers. Construction work lasted for many centuries on the territory of the Moscow Kremlin.

Moscow and the Kremlin were captured by Napoleon's army in 1812. The French army entered the Kremlin September 1812, but soon withdrew from Moscow because of the fire. The city was severely damaged. The communists government was settled in the Kremlin in 1917. Many historic buildings have been destroyed on the Moscow Kremlin territory at the time of the Soviet Union.

In the years 1935 - 1937, five-pointed stars of a red glass were installed on the top of five towers. There are proposals to remove these stars from the towers of the Kremlin and install two-headed eagles. The Kremlin has been included in the UNESCO World Heritage List in 1990.

This photo was taken from the opposite bank of the Moscow River.

Existing walls and towers were built in the years 1485 - 1516. Double-horned notched “teeth” crown the top of the walls. The wall height is ranging from 2 to 2.5 meters and thickness from 65 to 75 centimeters. There are 20 towers along the Moscow Kremlin walls. Four of towers have gates. The main gate is through the “Spasskaya” tower. It is normally closed to the public (with the exception of official and religious ceremonies). Perhaps the passage through the Spassky Tower will be allowed in the near future. The gate under the “Nikolskaya” tower is often used for service duties only. Visitors normally enter the Kremlin via the gates under the “Troitskaya” tower. Armory chamber and the Treasury fond normally are accessible via the gates of the “Borovitskaya tower”. The tallest tower has a height 79.3 meters.

The Spasskaya Tower is the most famous tower of Moscow Kremlin. The tower is located in the central part of Red Square. There is the main gate into the Kremlin (the Spassky Gate) in the tower. The tower was built in 1491 by architect Pietro Antonio Solari. The upper part of the tower was completed in the years 1624 - 1625. Originally, it was named the Frolovskaya Tower. The tower's modern name comes from the icon of “Spas Nerukotvorny” (The Saviour image Not Made by Hands), which was placed above the gates on the inside wall in 1658 (it was removed in 1917) and the wall-painted icon of Spas Smolensky (Smolensky Saviour), which was created in the 16th century on the outside wall of tower (plastered over in 1937, reopened and restored in 2010).
The clock on the tower existed since the 16th century. The modern Kremlin clock has been made in the years 1851-1852. The height of the tower without a star is 67,3 meters. The tower height together with the star is 71 meters.

“Ivan the Great” Bell Tower is located on the north-east corner of the Cathedral Square. Bell Tower was the tallest building in Moscow until the beginning of XVIII century. The church was built in the period from 1505 to 1508 years. In 1600, the height of the bell tower has been increased to 81 meters. Currently, it is a functioning church and a museum. 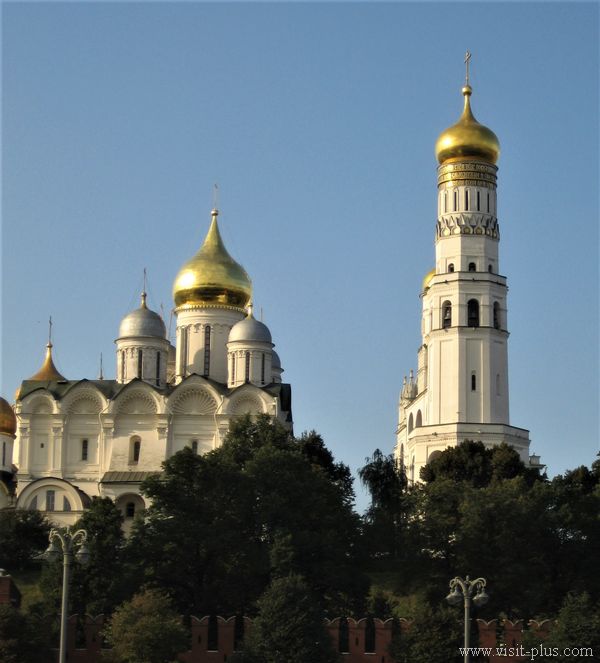 Palace of the Facets

Palace of the Facets is one of the oldest preserved secular buildings in Moscow, a monument of architecture. The building was constructed in 1487 - 1491 years (Ivan III reigns) by architects Marco Ruffo and Pietro Antonio Solari. Palace of Facets is currently one of official ceremonial hall in the residence of the President of the Russian Federation and thus admission is limited for prearranged tours only.

Tickets to the territory of the Moscow Kremlin and its museums are sold at the Kremlin tickets office. Ticket office is located in the “Aleksandrovskiy sad” park (Alexander Garden), near of the metro station “Arbatskaya” exit (also exits of the metro stations “Biblioteka imeni Lenina” and “Aleksandrovskiy sad”). At the box office of the Moscow Kremlin may be a long line during the hot season.

The Internet provides a convenient opportunity to prepare for a trip without leaving home.
► Tickets to the Kremlin can be bought online as well. Look for tickets and guided tours here.

Most of the tourists usually come to the Red Square and want to get on the territory of the Kremlin. The nearest metro stations to Red Square and to the Moscow Kremlin are “Ploshchad Revolutsii”, “Okhotny Ryad”, “Kitay Gorod”, “Biblioteka imeni Lenina”, “Aleksandrovskiy Sad”.

You can find the location of buildings, museums and attractions in the Kremlin on the tourist map.

Is it safe to travel to Europe? Travel to which countries in Europe should be avoided now?
Which website can I use to book hotels in Russia
The tourist season of summer 2022 seems to be starting well in Greece
Summer vacation 2022 - how much can it cost, compare Greece, Cyprus and Turkey
Flights to Cyprus from Finland are resuming
Where to spend a cheap vacation this year? In Turkey!
Where to go on vacation in summer 2022
Save a little on accommodation during your summer vacation 2022
Santo Domingo Carnival Parade 2022 will be held March 6
Where to Go for Spring Break - Best Destinations and Dates