Fountain of Neptune in Florence 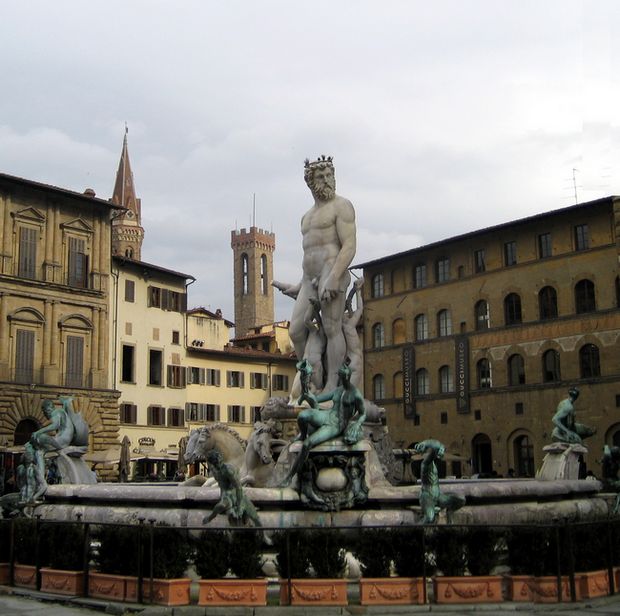 The “Fountain of Neptune” is situated on the “Piazza della Signoria” square (Signoria square), near the “Palazzo Vecchio” in Florence (Italy, Tuscany). The fountain was commissioned in 1565. It is work of the sculptor Bartolomeo Ammannati and some assistants. The fountain was created on the initiative of Cosimo I de Medici.

The fountain has an octagonal basin and several sculptures. The sculpture of Neptune is the most prominent part of the fountain. It is a copy made in the nineteenth century, while the original is in the National Museum. The Neptune figure was meant to be an allusion to the dominion of the Florentines over the sea.
The figure stands on a high pedestal in the middle of an octagonal fountain. Neptune face resembles that of Cosimo I de Medici. Four horse chariot driven by Neptune (two are made of white marble and two pink marble). Chariot wheels decorated with zodiac signs, which symbolize the moving of time. There are images of sea gods, satyrs and fauns in the corners of the basin.

This famous fountain has been repeatedly vandalized during its existence. It was used as a washbasin for laundry at the end of the 16th century. Now the Signoria square and the Fountain of Neptune is one of the places that tourists should see in Florence.

The photograph shows a general view of the fountain (February 20113). You can also see a larger picture of the sculpture of Neptune.

Famous attractions of Florence as the Ponte Vecchio, the Santa Maria del Fiore cathedral, the “Wild Boar” fountain are located at walking distance from the “Piazza della Signoria”. Nearby also is located the famous Uffizi Gallery.