One week holidays in Greece 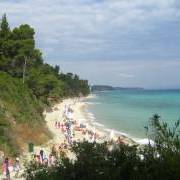 After nearly a year working seven days a week it became possible to get some rest. It was decided to go on vacation for a week to warm sea. Travel firm offered inexpensive “hot tour” for eight days in Halkidiki, Greece. Accommodation in “Alcyone” hotel, two meals, airfare to Thessaloniki and transfer cost 14 thousand rubles. In high season it is a very low price. 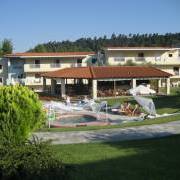 Alkion Hotel is better than it was expected. The small, comfortable hotel is situated at a distance about one kilometer from the sea coast. Near the hotel is pool and bar. The hotel is well suited for those who like a quiet holiday. It is good for families with children. To the sea you can walk for 15 minutes or can take the bus, which regularly drove the hotel guests to the sea (for free). Hotel staff was very friendly and was doing its job very well.

Near the hotel is also “Kriopigi Beach hotel”. From the hotel to the beach regularly go a small “train” designed for tourists. Address of the hotel: Kriopigi, Kassandra, Halkidiki, Greece.

During the rest we mostly swam and sunbathed, walked around the surrounding area. There are not many opportunities for shoppers. There are supermarkets and small shops designed for tourists nearby. 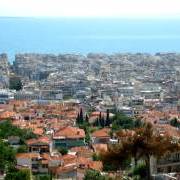 One day was devoted for trip to the Thessaloniki city. The Thessaloniki is located approximately 80 kilometers from the hotel. The bus left the Kriopigi village early in the morning. Around 10 am we arrived in Thessaloniki. Thessaloniki is a big city with a population of over one million people. First we walked through the city, the local shops and marketplace. Then the bus went round a few local attractions. In the evening back to the hotel. In a short time to navigate in a strange city is difficult. It was necessary first to explore the city using the internet to study travelers' reviews. But the best option is to rent a car. By car you can visit all interesting places. 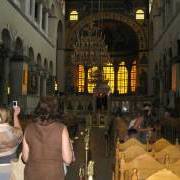 Mosaics 5-6 centuries were surviving in St. Dmitry church, which is one of the city attractions. The church located in the historic city center at the intersection of St. Demetrius and Seleucus.

White Tower is the most memorable architectural object in the city. The tower was built in the XVI century on the foundations of older buildings. Greek flag flagpole which is over the tower is a mast Turkish battleship that was sunk in the port of Thessaloniki in 1912. The White Tower is part of fortifications of the city and covered the eastern flank of the city walls. A beautiful view of the city is from remnants of the walls of the town fortress.

The “Macedonia” international airport is located approximately 12 kilometers to south of the city. Airport serves domestic and international flights and charter flights fly tourists on their way to holiday in Halkidiki. 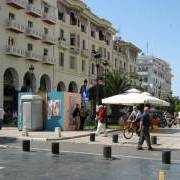 One week is not much, but enough to take a break from hard work. But in this time of year is possible well to rest also in northern Europe. Perhaps, tripto the south is best when at our country is cold, spring, fall or winter.

By the way. TV Channels daily broadcast news information about the disorders and clashes of protesters with the police on the streets of Greek cities. There were no signs of this in Thessaloniki, we have not noticed.

Information about the hotel 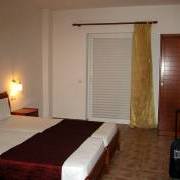 Information is taken from an information booklet of Alkion Hotel.

Alkion 4 stars hotel is situated in 15 acres field full of green trees with a wonderful view to the sea and to a colorful well-maintained garden in Kriopigi, Halkidiki. The complex has 50 studios and 9 suites (2 with Jacuzzi). Satellite Television, telephone, fridge, air conditioning, cooker, hair dryer and safety deposit boxes are available in all rooms. Each room has a balcony with scenic view overlooking the Sea or the swimming pool. The hotel features a breakfast area, games room, kids playground, pool and pool bar.