Hermitage Museum is the most famous and most popular museum in St. Petersburg. It is the largest art and history museum in Russia. The Hermitage is one of the best museums in the world. The museum's collection has about three million artifacts, works of art and monuments of world culture of different times and nations. The Hermitage Museum has several branches in St. Petersburg, as well as the exhibition grounds in other cities in Russia and in other countries. Hermitage must be visited by all the tourists, who are interested in museums, history, culture and art. 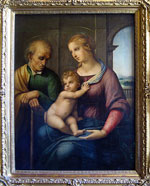 In 1764, the Russian Empress Catherine II got from Berlin a collection of valuable paintings (on account of reparations after the war of 1756-1763). It formed the basis of the Empress private art collection. First time this collection was housed in a wing of the Winter Palace, which was called the Hermitage (Small Hermitage, from the French word ermitage - a place of solitude).

A new building was built in the years 1771-1787 for storing collections. It get name the Big Hermitage. Until the mid 19th century Hermitage Museum could to visit only close to imperial family people. In 1852, during the reign of Nicholas I, the Hermitage was opened to the public. At the end of the 19th century the museum was visited by 50,000 people a year.

The museum contains a huge number of works of art from different times and countries. The collections of the museum have a large number of items related to the culture and history of mankind. It is impossible to see all the museum collections for a short time. It will probably be useful to visit the official site of the museum and plan what rooms you would like to visit. It will be helpful to decide for yourself, what you are most interested in: art of different countries and different eras, paintings of European masters of the Renaissance, paintings of Russian artists, ancient culture, sculpture of ancient Greece, ancient Egypt, armor and weapons, works of jewelry.

Information about some of the collections of the Hermitage Museum

The Hermitage has about 2 million items related to ancient civilizations and early Middle Ages. This is one of the best collections in Russia. Presented in the museum objects belong to the era of the Paleolithic and Iron Age, before formation of the first states. Here you can see the female figures and the figures of animals, which were made by people about 20 thousand years ago.

Culture and art of the ancient world

Hermitage has more than 100,000 exhibits which illustrate the culture and art of ancient Greece, ancient Italy and ancient Rome. Age of the most ancient objects is about 5000 years. The collection includes ancient Greek and Italic vases, Roman sculptures, terracotta figurines from Greece, gold products.

Collection of Western European art has about 600 000 exhibits. This is one of the best collections in the world. Here you can see paintings and sculptures that reflect all stages of the development of art from the Middle Ages to our time. The museum contains works, made by artists from England, Germany, Holland, Spain, Italy, Flanders, France and other Western European countries.

The Hermitage has a large collection of objects and works of art related to the culture of the Russian people. The museum displays objects that were found at the archaeological sites in Novgorod, Kiev, Pskov and other cities on the territory of ancient Russia. Here you can see a collection of icons, paintings of Russian artists. There is also a Russian museum in St. Petersburg, which specializes in Russian art.

The history of the development of weapons from ancient times to the 20th century is represented in the collections of the Hermitage Museum. You can see melee weapons (bladed weapon and blunt weapon) and firearms made by Russian craftsmen and artists of other countries in the museum. Collection of Western European arms content more than eight thousand exhibits. Most of the museum weapon items are not only monuments of technology and weapons, but also works of art. In "Knight Hall" is exhibited a large collection of medieval knight's armor and weapons of European knights.
If you are interested in weapons, be sure to also visit the museum of artillery and naval museum.

Hermitage Museum has a large number of exhibits relating to the history and culture of Asia and Far East. Dedicated to east cultures exposure have approximately 180,000 exhibits and occupy more than 50 rooms of the museum. The museum presents art of ancient Egypt, Mesopotamia, Central Asia, the Caucasus, Byzantium, the Middle and Far East, India.

Coins, money, medals, badges are on the displays in numismatics department. The museum has a large collection of ancient coins, coins of different countries represented.

"Treasure Gallery" collection got its name during the reign of Catherine the Great in the XVIII century. Here you can see the ornaments and jewelry, which were made thousands of years ago. The collection consists two sections: Gold exhibition and Diamond room. The museum has about a thousand of gold products. Works of jewelry of different times are stored in "Diamond Room" (from the III century BC to the beginning of XX century).

The museum expositions are also located in the Winter Palace of Peter I, the Menshikov Palace, Museum of the Imperial Porcelain Factory, General Staff Building.

The ticket price for buying in the museum ticket offices on the day of visit: RUB 800 (entry to the museum's main exhibition and departments).

You can check the Hermitage museum location on the map of St. Petersburg.