Metro station “Komsomolskaya” (Комсомольская) are located on two lines of the Moscow Metro: “Sokolnicheskaya” line (line 1, marked on the schemes in red) and the “Koltsevaya” line (Ring line, marked on metro map brown). Metro station “Komsomolskaya” located under Komsomolskaya Square, near “Leningradsky”, “Kazansky” and “Yaroslavsky” railway station. This is one of the busiest transportation hubs in Moscow. Station is located at a distance about 3 kilometers to northeast from Moscow center. 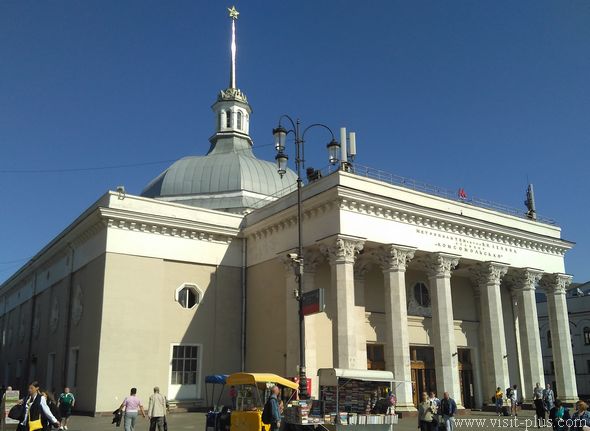 Metro station “Komsomolskaya” of the Moscow Metro Sokolnicheskaya line is located between the stations “Krasnoselskaya” and “Krasniye vorota”. The station was opened on 15 May 1935. The station is connected to the eponymous station of “Koltsevaya” line (Circle Line).

Metro station "Komsomolskaya" of “Koltsevaya line” (Circle Line) is located between stations “Prospect Mira” and “Kurskaya”. The station was opened on 30 January 1952. The station has exits on the “Komsomolskaya” square, to “Leningradsky”, “Yaroslavsky” and “Kazansky” railway stations (voksal).

The north end of the station hall has exit to “Leningradsky” and “Yaroslavsky” railway stations (shared ground lobby to two metro stations). In the center of the underground hall of the station begins a transition that leads to the “Komsomolskaya” metro station of “Sokolnicheskaya” line and “Kazansky” railway station (via an underground corridor).

The author of the design of the station is the architect A.V. Shusev. He was awarded the Stalin Prize for his work on station project. Station is made in the style of Stalin's empire. Station decoration devoted to the theme of struggle of the Russian people for independence. 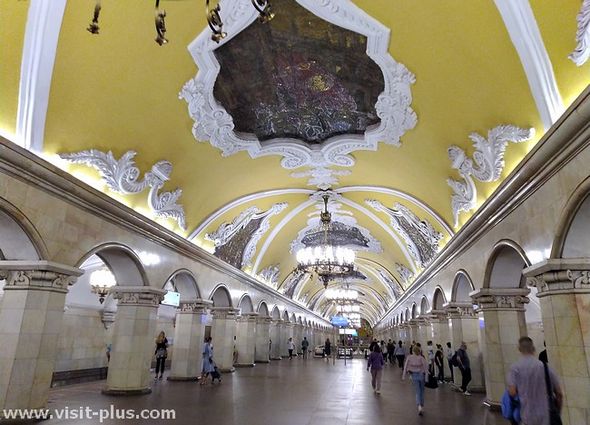 There are some places of interest, located near the metro station Komsomolskaya:

There are some hotels near the metro station Komsomolskaya and Kazan, Leningrad and Yaroslavl stations in Moscow. If for some reason you are not satisfied with these hotels, you will certainly be able to find a suitable hotel or apartments nearby at an affordable price with the help of any online hotel search and reservation service.

Hotels located near the metro station Komsomolskaya in Moscow.