A short vacation in Spain

What country to choose for a vacation trip: Spain, Greece or Turkey? Only a few months after our trip to Thailand, again, we may take a week off in late May. Where to go now? What we want to get? Warm sea, good climate, low price.
We did not have long to choose. This offer was impossible to refuse. It will be a trip to Spain! Costa Dorada resort coast, near the city of Tarragona. I hope it will be possible to do trip to Barcelona (distance to Barcelona from Tarragona is about 100 kilometers). There was short preparing for the trip: learning maps of cities Barcelona and Tarragona.

The plane took off on schedule. We flew to Spain by Boeing 737 plane (Transaero Airlines). Stewardesses worked perfectly (as always). We want to thank the airlines staff for the flight.

We were met by representatives of the tour operator “Natalie Tours” in Barcelona airport. In our experience, the process of reception of tourists along traveling is well organized. We were met at the exit of the airport, driven by a comfortable bus to the hotel. On the first day “Natalie Tours” staff held an organizational meeting which gave a lot of useful information and told about the proposed tour.

There were some unpleasant also. Weather on the Costa Dourada was not as what we expected. In the last few days before trip was hot, sunny weather in St. Petersburg (about 30 degrees). The sky was covered with clouds in Barcelona. A little rain was in “La Pindea” village (near the Tarragona city and Salou village). It was pretty cool. (Some surfers were catching a wave on the beach in La Pindea despite such weather.) We were warned that the end of May in Catalonia is not hot. But we could not foresee this cold weather. There was very warm weather in previous years trips, also in the last week of May, in Turkey (Alanya) and Rhodes (Greece). Even at the end of February in Cyprus was warmer! But nothing can be done about it. We will see the sights and walk around the city.

A pleasant surprise happens at the first day. It turns out, that we got a free tour cost 60 euros as a bonus from the tour operator! Thanks “Natalie Tours”! On Monday we go in Barcelona for free! Before departure I could not decide on what transport to get to Barcelona (by train or by bus). Should I buy a ticket on a “Bus Turistic” tourist bus in Barcelona? Now the problem was solved: go on by the tour operator bus.

Tax on tourists introduced last year in Catalonia. You will have to pay a certain sum in addition, not mentioned in the cost of living, when you check into the hotel. It is 1 euro per night in a 4-star hotel. Children under 16 released from the tax. Unfortunately Catalonia joined this vicious practice.
The flag of Catalonia is depicted on the photo. Four red stripes on a golden background.

The weather was much better on Sunday. Sky was a little cloudy in the morning. We went to the sea after breakfast. Soon the sky cleared. It was possible to walk along the beach, to sunbathe and even to swim. The air temperature was about 22 - 23C. (Thermometers installed in pharmacies show the air temperature) The exact temperature of the water was unknown to us. The water was cool, you can say the cold. But you can swim. We swam at every opportunity (if weather permitted).

Despite the cool weather, the radiation of the sun is still strong. You need to be careful and not stay under the sun for a long time. So after being on the beach we decided to do trip in Tarragona.

A regular bus service is from Salou via La Pineda to Tarragona (the “Plana” company). Buses run along the waterfront in La Pineda village. A company representatives often stay at the bus stop. It is convenient to use the T10 card for ten bus rides for travel on buses in the region. One card can be used to purchase tickets for the group (no need to buy a separate card for each person). The cost of the card in 2014 was 15.5 euros (10 trips plus card). The card can be bought in the representation of the company near the waterfront.

We bought a card from a representative of our tour operator (Natalie Tours). The cost is the same, but we've got a 10 Euro bonus! To us card cost 5.50 euro only. Trip on the bus to Tarragona from La Pineda take about 15 - 20 minutes. The bus station is located in the center of Tarragona, on the “Plaza Imperial” square (Bus Station location is marked on the map of Tarragona). We walked along the Rambla Nova street to the sea, stood on the Mediterranean Balcony, looked at the amphitheater, walk through the Old town in Tarragona. The next day trip to Barcelona was planned. Weather forecast promised rain in Barcelona for the whole day. 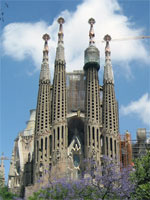 Thunderstorm and heavy rain began at the night. We went to the bus after a quick breakfast. Rain was going on throughout the road to Barcelona. City tour started from the observation deck on the Montjuic hill. Then the bus drove around the main attractions of the city center. We got off the bus on “Plaza Catalunya” square and the whole group went to the “El Corte Ingles” shopping center. At the shopping mall we get Barcelona tourist maps (tourist information point is located on the -1 floor of the shopping center. (By the way, from the top floor of the shopping center is a good view of the Catalonia square.)

When we left shopping center we were met by lovely weather. The rain stopped, the sun was shining. Weather forecast for once again was inaccurate. We had only 4 hours of free time in Barcelona. Those who wanted went to the Aquarium and the Badlo House. We walked through the streets of Barcelona, in Gothic Quarter, along the Rambla Street. Four hours is not enough time for exploring Barcelona. We had the impression that much of the sights of Barcelona are Gaudi architecture. We noticed large number of tourists from different countries. At the appointed time we took a bus at the Catalonia Plaza. The rest of our group got the bus in the parking lot near the Aquarium. (One of the women did not come to the place of meeting. We waiting for her but she did not come. As it turned out, she was lost, and get to the hotel by himself.) (It is possible to get to Salou from Barcelona by train in this case.)

The next day after breakfast we were sunbathing and swimming. The weather was quite warm, the sea was cool. Then we traveled by bus to Tarragona for shopping. We visited two shopping centers (located near the bus station).
It is possible to buy branded clothes, shoes and accessories in the “El Corte Ingles” shopping center.
You can buy fashionable products at better prices in the “Central Park” shopping mall. For example, left the impression that the products in the “Zara” shop are much cheaper than in the stores of this brand in other countries (Russia, Finland, Italy, Thailand).

There are many small shops that may be interesting for shoppers in the city center streets. In some stores the prices are quite low (especially where work sellers came from China).

The last days of vacation in Spain

In the last days we walked along the beach, have swimming and sunbathing. We took a trip more once in Tarragona. We were watching performances at the hotel in the evenings. On Friday in La Pineda worked clothing market (next to the waterpark).

“Estival Park Salou” 4-star hotel located in the La Pineda village, at a distance approximately 3 kilometers from the Salou village and at a distance approximately 8 kilometers from the Tarragona city. Distance to Barcelona is about 100 kilometers.
In fact, the “Estival Park” hotel is a large hotel complex, which occupies the entire block. On the territory of the hotel complex has two buildings with rooms, several buildings with apartments. There is also a gym, children's playground, a large spa area with swimming pools and water treatments (Aquum Spa & Wellness).
There is a great beach near the hotel (shallow, sandy beach is well suited for children), a water park. Nearby is also one of the best theme parks in Europe – Port Aventura.
Tarragona city is easily accessible by bus from La Pineda.

See reviews on this and other hotels in Spain here.

General impressions of the trip

We thank the employees of companies Ambassador Tour and Natalie tours for our holidays.