Barcelona is located in the northeast of Spain, on the northeast coast of the Iberian Peninsula. Barcelona is the capital of the autonomous region of Catalonia. Distance from Barcelona to the French border is about 120 kilometers. Mediterranean coast of Catalonia is a popular place for summer vacations for residents of European countries. Tourists are attracted in Barcelona also by interesting history of the city, a large number of attractions and museums. 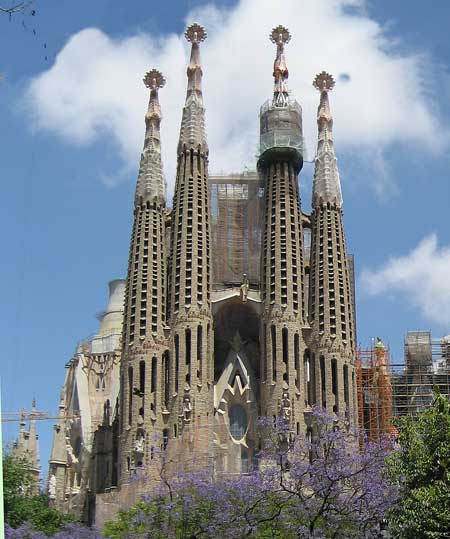 Barcelona is located on a plain, facing the Mediterranean Sea. Plain is approximately 5 kilometers (3 mi) wide. It is bordered by the mountain range of Collserola (to northwest), the Llobregat River to the southwest and the Besòs River to the north. The city of Barcelona covers an area approximately 100 square kilometers.

You can use the interactive map of Barcelona when planning a travel.

Most popular tourists places in Barcelona 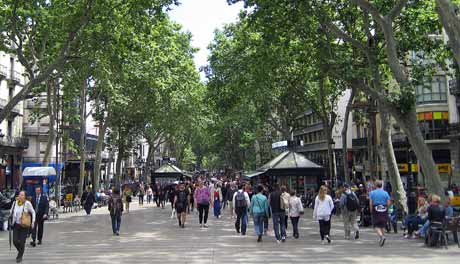 There are many places interesting for tourists located in other parts of the city:

How to get to Barcelona

The most convenient, fastest and cheapest way to get to Barcelona is to fly on an airplane. Many airlines perform regular flights to Barcelona and the airport of Reus. You can find out the prices for air tickets (and buy a ticket) online (on the Internet).

There are people who do not like to fly on airplanes. In this case, you can reach Barcelona by rail or by bus. It will take more time, and will cost, most likely, more expensive. Buses and trains to Barcelona go from many cities in Europe (Paris, Warsaw, Kiev).

Barcelona International airport (Aeropuerto de Barcelona-El Prat) is the second in terms of passenger traffic airport in Spain. The airport located about ten kilometers south-west of the city center, close to the sea shore. The airport has two terminals. Terminal 2 has a train station. Trains (R2 line) to airport depart from stations “Maçanet-Massanes”, “Barcelona Sants”, “Passeig de Gràcia” in Barcelona. There is a bus service between the terminals 1 and 2 of the airport. The airport can also be reached by bus from “Plaza Catalunya” and “Plaza de España” squares.

Railway connects Barcelona with Madrid, Girona, Valencia, Tarragona and other cities in Spain. There are over 20 railway stations in Barcelona.
“Barcelona Sants” is the main railway station in Barcelona. The station is located in the Sants-Montjuïc district in Barcelona, a little way to west of the city center. The station is located at the end of the street Avinguda Roma, between the “Plaça dels Països Catalans” and “Plaça Joan Peiró” squares.
“Amtrak Estació de França” is the second by number of passengers station Barcelona.
New “Estació de la-Sagrera” station is under construction. It will serve a large number of trains.

You can buy railway tickets online.

The main bus station of the city is “Barcelona Nord”. From the bus station is possible to get by bus to many European cities, for example: Paris, Lyon, Girona, Zaragoza, Andorra (Cadí), Valencia, Venice, Roma, Amsterdam. Many buses have also stop near the Sants train station. Bus station “Barcelona Nord” is located in the central part of the city, to northeast of Plaza Catalunya, near the Arc de Triomphe.
Bus station address: Barcelona North Bus Station, Calle de Alí Bei, 80, Barcelona.
The nearest metro station: “Arc de Triomf” (L1).

Port of Barcelona is one of the biggest (in terms of traffic) ports in Spain and Europe. Port is one of the most popular destinations for cruise ships on the Mediterranean. The port is composed of several parts. Tourists’ service mainly performs the “Port Vell” (the Old Port).

In the photo: a view of the Port of Barcelona from the hill.

Port provides service for passengers of cruise ships and ferries to the Balearic Islands (Mallorca, Menorca, Ibiza and Formentera islands). Maremagnum shopping center is located near the port (shops, cinema, aquarium). The port is located in the city center, near the Rambla pedestrian street and near the train station “Estació de França” (Barcelona França).

“Bus Turístic Barcelona” is a very convenient service for tourists to explore the city and sightseeing. Tourist Bus is a double decker bus, which top floor has no roof. The top floor is convenient for sightseeing.

The photo shows the Plaza Catalunya in Barcelona. View out of shopping center.

“Bus Turístic” have three circular routes in Barcelona. Buses are equipped with audio guides in 11 languages (it is included in the ticket price). After purchasing a ticket for one day, you can get off the bus in the interesting places and go back to the bus many times. You can switch from one route to another. The cost of the ticket for one day in 2014 was 27 € (for children 4-12 years 16 €).