Places to visit in Barcelona

There are many places in Barcelona, which will be interesting to see for tourists. This city has many architectural attractions, medieval buildings and works of modern architects. Works of Antoni Gaudi have particular interest for curious tourists.
There are many museums in Barcelona's in which you can see archaeological treasures and masterpieces of modern art. The most visited museum in the city has the Picasso Museum.
There are beautiful parks, places for shopping and nice beaches. Everyone can find here something interesting for themselves. If time permits, just walk through the streets in the old town (Gothic Quarter).
If you love football, then you will certainly be interested in the museum of Barcelona football club.

You can use our tourist map as a guide when planning a trip to Barcelona.

Catalonia Square (La plaça de Catalunya) can be regarded as the central square of Barcelona. Very often from this place, tourists are beginning to explore the city. Distance from Plaza Catalunya (on foot) to the port is about 2 kilometers, to the castle of Montjuïc about 4 kilometers, to the Sagrada Familia Cathedral about 2.5 kilometers, to the Camp Nou stadium and Museum FC Barcelona about 5 kilometers. It is possible to get to the Catalunya square from the airport by bus or by rail.

La Rambla is a pedestrian street in the center of Barcelona. It is the most famous street of the city. All tourists feel the need to walk along this street. Street is laid from Plaça de Catalunya Square (Catalonia Square) to Portal de la Pau square (at the coast). La Rambla street length is about 1.2 kilometers.

Gothic Quarter (Barri Gòtic) is part of the Old Town in Barcelona. Quarter is located north of La Rambla Street, between Plaza de Catalunya and the sea shore. The name of the quarter was due to the preserved buildings, some of which have survived from the Middle Ages. There are also some remnants of ancient Roman village. The most famous building of the Gothic Quarter is the St. Eulalia Cathedral. Catalonia Square, La Rambla street and the Barri Gòtic area is the first choice to visit for many visitors in Barcelona. The Barcelona Cathedral (Cathedral of the Holy Cross and Saint Eulalia, Catedral de la Santa Creu i Santa Eulàlia) is located in the city center, on Plaça de la Seu square in the Gothic Quarter. Cathedral construction lasted from 1298 to 1420. The cathedral was built in the Gothic style. Gothic Revival style elements were added later. The cathedral gothic façade is beautifully decorated with statues, pinnacles, and arches. Along with all the Gothic Quarter, Cathedral is a famous landmark of Barcelona. (It is possible to go for free in the cathedral in the morning till 12 and in the afternoon after a 17.)

Casa Milà (also known as La Pedrera) is one of the most famous works of Gaudi in Barcelona. The house was built in the period between 1906 and 1910. The house has an unusual shape even for our time. The house has no virtually straight walls and right angles. Many Gaudi contemporaries did not approve the building appearance and shape of the rooms. In 1984 “La Pedrera” was the first of XX century buildings included in the UNESCO World Heritage List. Nowadays, “La Pedrera” is a popular tourist attraction in Barcelona. Some of the rooms are open for tours (entrance fee).
Address: La Pedrera, Calle Provenca, 261 - 265, 08008 Barcelona,
Spain.
The nearest metro station: Diagonal (L3, L5).
Official internet site: www.lapedrera.com

“Casa Batllo photo” (also known as the “House of Bones”) was built in 1877 and later rebuilt by the architect Antoni Gaudi in 1904-1906. “Casa Batlló” feature is the almost complete absence in its decoration straight lines. Wavy shape is in the details of the facade and the interior design. When making facade architect used the theme of victory of St. George over the dragon (the victory of good over evil). Casa Batllo is included in the UNESCO World Heritage List.
Address: Passeig de Gràcia, 43, Barcelona. 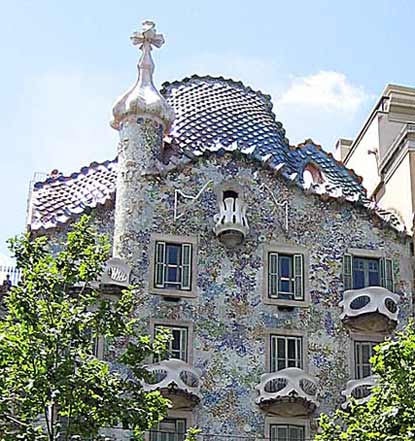 Guell Park (Parc Güell) was built between 1900 and 1914 by famous architect Antoni Gaudi by order of Eusebi Güell (a Spanish entrepreneur). The park and was officially opened as a public park in 1926. The park area is about 17 hectares. Like all Gaudí's creatures, park has an unusual appearance. Gaudi original buildings and green areas are built there. There is impressing views over Barcelona from the upper part of the park. Lovers of Antoni Gaudí art undoubtedly should not miss this place.
Some of the park is free to the public. Unfortunately, the most beautiful part is not freely accessible anymore.

Barcelona Aquarium is one of the best aquariums in Europe. There are 35 aquariums, in which about11000 animals are living representing 450 species. It is a good place to see a variety of species of fish and marine animals in one place (sharks, fishes, penguins and others). Some visitors do not recommend this place for a visit in their reviews.
Address: Moll d'Espanya del Port Vell, Barcelona, Spaine.
The nearest metro station: Barceloneta (line 4).
Web site: www.aquariumbcn.com

It is a monument to the famous explorer, the discoverer of America Christopher Columbus. The monument serves as a reminder that Christopher Columbus reported to Queen Isabella I and King Ferdinand V in Barcelona after his first trip to the new continent. The monument is located at the lower end of La Rambla Street, near the sea shore on Portal de la Pau square. Columbus statue is situated at high column. The statue author is Rafael Atché. The total height of the monument is about 60 meters. There is an elevator that lifts visitors to the deck inside the column.

The Picasso Museum is often named the most visited art museum in Barcelona. The museum has mainly early works of the artist created between 1895 and 1904, when the artist was very young. There are also some later Picasso works. It is possible to see how Picasso's work developed in the museum. If you want to see the best works of Picasso, you need to visit the Chicago Art Institute or Paris or Madrid. The museum was opened in 1963. It is located in the ancient, medieval houses. Total museum area is 10,6 sq.m. The museum also has a library.
Address: Montcada, 15-23, Barcelona, Spain. Distance from La Rambla to the museum is about 900 meters. You can walk to the Museum along the Carrer de Ferran and Carrer de la Princesa streets.
The nearest metro station: Jaume (L4).
Official site of the Picasso Museum: www.museupicasso.bcn.es
The museum location can be found on the map of Barcelona.

CaixaForum is a popular art gallery in Barcelona. Entrance to the museum is free. Founder of the gallery is a La Caixa bank. Art Gallery was opened in 2002, in a building of textile factory (it was closed in 1918). The art gallery hosts interesting exhibitions.
Address: Av. Marquès de Comillas, 6-8, Barcelona.
Metro station: Espanya (L1, L3).
Official site of art gallery.

Museum of the History of Catalonia

Barcelona Maritime Museum dedicated to the history of navigation. The museum has objects, documents, copies and models related to the history of navigation. Barcelona since ancient times is one of the most important ports in the Mediterranean. The museum is located in the city center, in the old shipyard building, near the port. Next to the museum is a Christopher Columbus monument.
The official website of the museum: www.mmb.cat/
Address: Maritime Museum, Av Drassanes, Barcelona, Spain.

The Archaeological Museum contains objects found in the territory of Catalonia, during the archaeological excavations. The museum also has works of art of ancient Greece and ancient Rome. The head office of the museum is located in the former Palace of Graphic Arts, which was built for the International Exhibition of 1929.
Address: Museu d 'Arqueologia de Catalunya, Passeig de Santa Madrona, 39-41 (Parc de Montjuïc), Barcelona, Spain.

Museum of Football club Barcelona is one of the most visited museums in the city. FC Barcelona is one of the most famous football clubs in Europe and the World. Many of visiting Barcelona football fans tends to visit “Camp Nou” stadium and museum. During a visit the museum and the stadium, it is possible to see objects related to the history of the club, prizes won by the team and personal players belongings, visit the various rooms of the stadium.
Address: Barcelona FC Museum, Aristides Maillol, entrance no 7, Barcelona,
Spain.
The nearest metro station: Collblanc (Line 5).
Official site of FC Barcelona: www.fcbarcelona.com
“Camp Nou” stadium location marked on the city map.

“CosmoCaixa” Science Museum in Barcelona is one of the best science museums in Europe. Museum helps to better understand the nature, space and environment. The museum will be of particular interest to children and youth. The museum also has a bookstore, library, coffee shop.
Address: Teodor Roviralta, 47-51.
Metro: Tibidabo L7.

Beaches of Barcelona are among the best urban beaches in the world. Beaches are located to east of the historic city center. Part of the beach was created to the Olympic Games in 1992.

The total length of beaches is about 4.5 kilometers. Beaches Sant Sebastià, Barceloneta and Somorrostro are the oldest and most popular town beaches. They are located to the west of the Olympic Port (The Olympic Harbour). On the other side of the harbor are the beaches of Nova Icària, Bogatell, Mar Bella, Nova Mar Bella and Llevant.

It is possible to get free Barcelona maps, Barcelona tourist guides in many languages, information about events (today and this week) as well as to find and book a hotel in a tourist information point. You can also get help and advice from professionals.