Metro station “Arbatskaya” on “Arbatsko-Pokrovskaya” line is a part of the largest transportation hub in Moscow Metro (which includes four stations on four metro lines). From this station you can go to the stations “Biblioteka imeni Lenina” (Sokolnicheskaya line), “Aleksandrovskiy Sad” (Filyovskaya line) and “Borovitskaya” (Serpukhpvsko-Timiryazevskaya line).

Ground station lobby is located near the intersection of street “Vozdvizhyenka” and “Krestovozdvizhenskiy pereulok” street. The lobby is built in the building of the Ministry of Defense of the Russian Federation.

Transfer to Sokolnicheskaya line (“Biblioteka imeni Lenina” station) and Filyevskaya line (“Aleksandrovskiy Sad” station) is possible by escalator, which is located at the eastern end of the hall (and from there you can go out into the city to Alexandrovsky Gardens and Mokhovaya Street). By located in the center of the hall stairs, you can go to the station “Borovitskaya” (Serpukhpvsko-Timirjazevskaja line). There is not transition to metro station “Arbatskaya” of Filyovskaya line (2014).

Metro station “Arbatskaya” of Moscow metro “Filyovskaya” line is located between the stations “Aleksandrovsky Sad” and “Smolenskaya”. Station was built on place where 17th century church was located. It was opened May 15, 1935. Depth of the station is 8 meters. Ground station lobby is located on “Arbatskaya” square, next to the streets Znamianka, Gogolevsky Boulevard, Arbat, New Arbat. Ground lobby is designed as a separate building, having in the plan a five-pointed star shape. Station lobby was one of the first symbols of Moscow Metro. 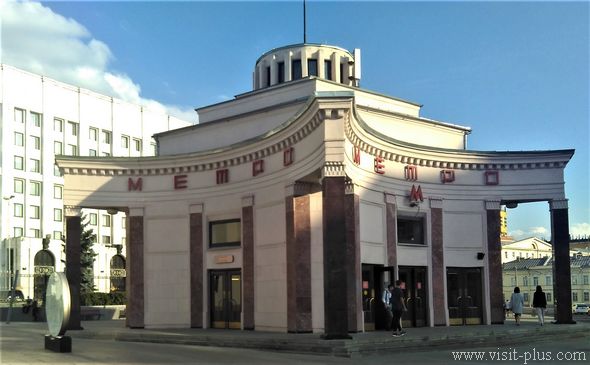 There are located near the metro station “Arbatskaya” in Moscow: