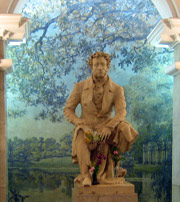 The station is named after the most famous poet of Russia - AS Pushkin. Vitebsky (formerly Tsarskoye Selo) railway station is located near the metro station Railway station connects St. Petersburg with “Pushkin” city (Tsarskoye Selo), where poet Pushkin was studied.
Pushkin statue and depicting the park panels are situated at the end of the underground hall.

"Zvenigorodskaya" metro station (станция метро Звенигородская) is located near the junction of “Zvenigorodskaya” street and “Zagorodniy Prospect” street. The station is part of the “Primorsky-frunzenskaya” metro line (line 5, purple line). It is located between the stations “Sadovaya” and “Obvodny Canal”.

Station decoration is devoted to Semenovsky regiment, whose barracks were located in this district of St. Petersburg. There is a mosaic depicting soldiers of Semenovsky regiment times of the reign of Peter the Great in the station.

There is also "Pushkinskaya" metro station in Moscow.

Hotels near the metro station Pushkinskaya and Zvenigorodskaya

There are some hotels near the metro stations Pushkinskaya and Zvenigorodskaya and Vitebsky train stations in Saint Petersbutg. If for some reason you are not satisfied with these hotels, you will certainly be able to find a suitable hotel or apartments nearby at an affordable price with the help of any online hotel search and reservation service.