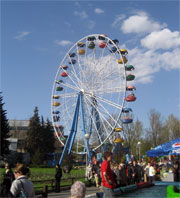 Amusement park ”Divo Ostrov” is located in the western part of St. Petersburg, on the territory of Krestovsky Island, in the north-east part of the “Primorsky park Pobedy” park. Entrance to the park is located near the metro station “Krestovsky Ostrov.”
The park territory is divided into thematic areas. The park has a lot of entertainment attractions, which suit for visitors of any age enjoyment. It is not necessary to use the rides in order to have a good time here. You can simply take a walk in the park.

An amusement park “Divo-Ostrov” has a lot of fun for children of all ages. Here also arrange a variety of interesting events and activities. To ensure the safety all the children's playground is covered with a special soft rubber covering.
There are a restaurant and several cafes on the park territory. You can also organize a children's birthday party, banquet or wedding. Nearby can be hired skates or bicycle.

Amusement park operates in the warm year season (usually from early May to mid-October). Mode of operation during the summer months (2014): Monday to Friday from 12.00 to 23.00; Saturday, Sunday and holidays from 11.00 to 00.00.
In the amusement park Divo-Ostrov are entertainment attractions for different groups of visitors.

Access to attractions (including to extreme) is limited depending on the growth of the visitor. (For details, look at the official site.)
In order to use extreme rides need to have growth is usually not less than 140 centimeters (no age restrictions).

As a gift for the birthday and the newlyweds on their wedding day amusement park gives 1 hour for free.

Excerpts from the "Questions and Answers" official site:

"Primorsky Park of Victory" is located in the western part of St. Petersburg, on the island "Krestovsky", between the underground station "Krestovskiy ostrov" and under construction "Zenit-Arena" stadium. The park was opened in honor of the naval victories won by the USSR in the World War 2. Its total area is 168 hectares. The central alley of the park is laid in the direction from east to west, from the metro station to the Gulf of Finland.

Park ponds occupy an area of ​​seventeen hectares. On one of the ponds located swan kennel, therefore the the pond is sometimes called "Swan Lake."

Within the park is located an amusement park "Divo-Ostrov".

The location of the park you can see map of Saint Petersburg .

We offer a route for a walk (if the weather is good). Go to the metro station "Krestovsky Ostrov", go through the park to a new football stadium (Novokrestovskaya metro station is behind the stadium), go to the Park of the 300th anniversary of St. Petersburg". You can take a walk in the park and visit the shopping and entertainment center "Piterland". The metro station "Begovaya" is nearby.