Greece is one of the most popular countries in Europe for a summer holiday this year.
Crete is the largest and most southern island of Greece. The island has two international airports, close to the towns of Heraklion and Chania. Arriving here from all European countries tourists are leaving to the island resorts.

Hersonissos is a small resort town on the northern coast of Crete. Hersonissos is situated approximately 25 kilometers to east of Heraklion. The municipality consists of several small villages, some of which are located by the sea. There are many hotels and rental properties apartments in the town and next to it. There are a lot of restaurants and cafes, which work almost until morning during the tourist season, on the waterfront. El Venizelou Street is laid along the shore. There are located a lot of shops with souvenirs.

One of the beaches in Hersonissos is on the photo above.

How to get to Pulkovo airport (Saint Petersburg) if your flight leaves early in the morning? Metro and buses do not run at night. It remains one option - a taxi. Taxi Bonus had been recommended for us (as "the cheapest taxi in St. Petersburg"). Discount price is available by ordering a taxi online. We ordered a taxi for about a day before departure. The cost was 800 rubles. But, "marketing" tricks are well known to all. The site honestly reported that the final cost of the trip may be different. Therefore, I have called the phone. Is 800 rubles the right price? Yes! Must I pay extra for anything? No! Is it possible the price will be changed? No! Despite this the price increased by 25% at the time of exit, to 1,000 rubles. Do not always believe what had been promised for you.

Agrabella hotel (3 stars) is located in the city, at a distance about 250 meters from the beach. There is a swimming pool in the yard. It is good hotel for those who are not looking for luxury. There is clean room, WC with shower, balcony. Small, old TV shows some channels. There are pros and cons of this hotel. The hotel is located in the city center. This is a plus. Negative characteristics. Paid internet (3 euro for 1 hour) is available only. There is paid air conditioning (10 euros per day). Connecting conditioner outputs a hotel in another price category. But you can be with the open balcony door. Do I want to come to this hotel again? No. The hotel is not bad for the price, but the room is a bit noisy in the evenings. This is the first hotel in which is paid air conditioning. The lack of an opportunity to be connected to the Internet always creates considerable discomfort (but also creates an opportunity to disconnect of daily problems). 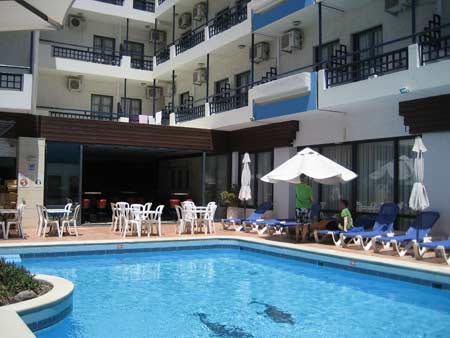 The Agrabella hotel pool and courtyard is on the photo.

The main street of the town runs close to the hotel. There are many shops for tourists, as well as cafes and restaurants. A supermarket is available on the next street. (SPAR supermarket, Χαλκιαδάκης.) Most of the area near the waterfront is occupied by restaurants. McDonald's is located here too.

Beaches in our area of Hersonissos can not be called as very good. They are often small. There are rocks in the water in some places. A longer beach is to west of the port. There are usually no cabins for changing clothes on the beaches. Beaches are usually sandy. Here you can rent a beach chair with an umbrella or to be without it. Some of the beaches are pretty nice. There are a lot of people on the beaches. 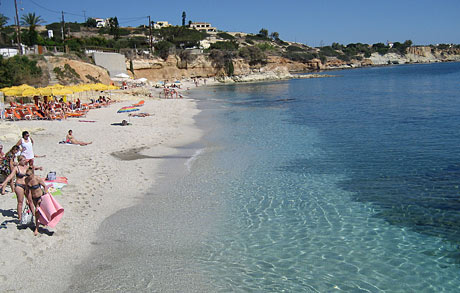 You can find a few small beaches with white, clean, very coarse sand if you go on Dimokratias Street to the west. One of them is equipped with everything you need (cabins for changing clothes, shower, toilet and a small cafe). Price of pair of beach chairs and sun umbrella is 7 euros.

Your tour operator will strongly recommend to buy trips only from him. But you have a choice. You can buy excursions from tour and travel agencies, which are a lot in Hersonissos. You can rent a car and travel by yourself. The cheapest cars in early June were offered little cheaper 30 euros per day (including insurance). Gasoline cost about 1.5 euros per liter.

You can go to Heraklion by bus.

(Prices at the beginning of June. It will be more expensive from mid-June to late August.)

Ticket prices to many tourist places has increased significantly in the past year. For example, the entrance to the palace of Knossos has grown from 6 to 16 euros.

Boat trips are selling in the port of Hersonissos: fishing, scuba diving, trips on the sea by yacht.

Heraklion is the largest city on the island of Crete. Here is located one of the two international airports of the island. It is possible to get to Heraklion from Hersonissos by bus. Buses run about twenty minutes. The buses run less frequently on Sunday. In addition, not many shops are open in Heraklion on Sunday. Therefore, Sunday is not the best day for a trip to Heraklion. 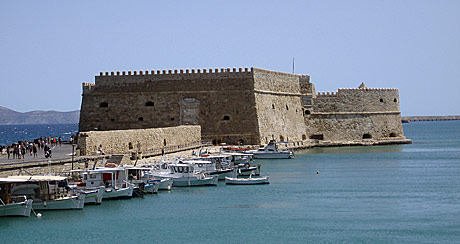 Ticket price from Hersonissos to Heraklion is 3.30 euros (2016). Tickets need to buy in a bus. A return ticket is necessary to buy at the bus station box office. The bus station in Heraklion is located next to the passenger port, not far from the fortress.

Ancient Venetian fortress is the main historical attractions of Heraklion. What else to do in Heraklion? Just take a walk through the streets in the city center. There exist a lot of beautiful places. You can visit the Archaeological Museum, which is located in the city center, on Elefterias square. There are many shops in the city center, including popular Mango, Zara, Bershka, Stradivarius.

There are many cafes and restaurants in the city center. Tables handed down on the sidewalk and squares. There are always a lot of tourists.

Explore the city is comfortable with a tourist bus company Heraklion Sightseeng Tours. Double decker buses with open-top follow the circular routes. The bus has audio guide in 8 languages. You can get off from the bus and then re-sit an unlimited number of times. Stops are available in all interest to tourists’ areas, including a fortress, port, Archaeological Museum. You can also get to the palace of Knossos by bus. Ticket price in 2016 was 15 euros. 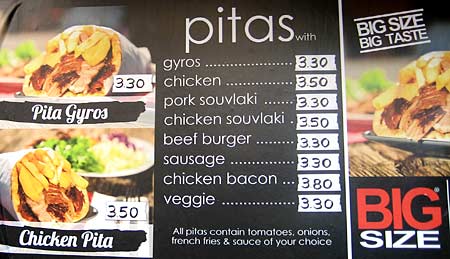 Prices option in one of the cheap cafes on the waterfront next to the McDonald's. A food can be a bit expensive in restaurants where you are served by waiters. A glass of beer costs about 2.5 euros.

Crete is a mountainous island with rocky shore. Therefore, most of the beaches on the island are relatively small. Some of them are very beautiful and suitable for bathing. There are also long sandy beaches on Crete. The longest sandy beach of the island is located to east of the center of Rethymnon town. Its length is about 13 kilometers. A long beach is also to the east of the city of Heraklion.

The photograph depicts Stavros beach, which is located west of the city of Chania. The beach is located in a small bay, so there are no big waves and the water warms better. This beach is famous for the fact the film "Zorba the Greek" was filmed here. Sirtaki or syrtaki dance was invented filmed the first time here.

The city of Chania is located in the western part of the island. Tourist bus rides away from Hersonissos to Chania in about 2.5 hours. According to the guides, houses on the waterfront of Chania resemble Venice. Quay really looks nice. There are many restaurants and shops on all surrounding streets. All space is filled with tourists from different countries. Prices in some of the cafes are quite reasonable, and the portions are large. 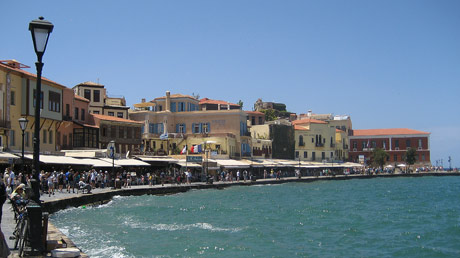 The photograph shows the promenade in the city of Chania.

The western part of Crete is more green than the eastern. There are more trees and bushes.

The most common tree in Crete is Olive. Olive trees planted everywhere. 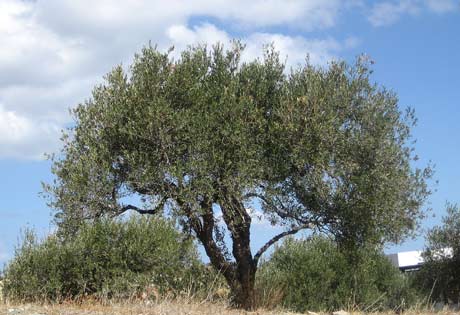 The most common flowers in Crete are blooming oleander. 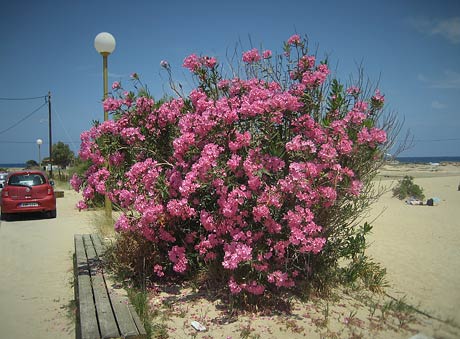 What is better? Organize the trip yourself, or buy a package tour? There are different opinions. Short trips for short distances, I usually organize myself. (I find and book hotels here.)
For holidays in the south I prefer to buy package tours. It is very advantageous to buy a last minute tours, if you have an opportunity to choose a convenient time for the holidays. This time one week tour from St. Petersburg to Crete cost for us about 31 thousand rubles for two persons. (Exchange rate 74 rubles for 1 euro.) Price includes return tickets, transfer from airport to hotel and back, 7 days accommodation, breakfast and dinner.