What the best hotel in St. Petersburg? There are many hotels, including some very comfortable and luxurious. But Belmond Grand Hotel Europe is often called as the best, the most luxurious and most prestigious hotel in the city.

Belmond Grand Hotel Europe St. Petersburg is located in the city center, at Mikhailovskaya Street, between Nevsky Prospect and Arts Square (Ploshchad Iskusstv). Distance from the hotel to the Palace Square is about 1 km, to Pulkovo Airport about 20 kilometers. 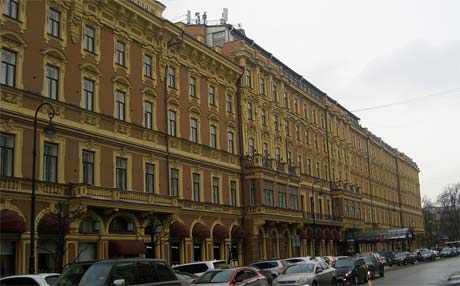 There are located near the Grand Hotel Europe in St. Petersburg:

The hotel has 266 rooms which are able to satisfy the most demanding customers. The high price of accommodation will ensure that only wealthy tourists will be your neighbors at the hotel. The hotel staff provides a high level of service to its customers.

The Grand Hotel Europe is the oldest St. Petersburg hotel. It has been opened January 28, 1875. Until 1991, the hotel was named "Europeiskaya". During its existence, the hotel accommodated many influential and famous people from around the world. Taking care of its guests, the hotel does not advertise the names of their VIP clients. November 8, 2009 at the ceremony World Travel Awards (London) "Grand Hotel Europe" was named as the most luxurious hotel in the world. The hotel is owned by Belmond.

You can be sure that you live in one of the best, oldest and most prestigious hotels of the city after choosing this hotel. It is a legendary hotel with a very convenient for tourists location.

We recommend booking hotel rooms on the BookingCom website.

Look at the hotel page on the BookingCom website (for more information, prices and customer reviews).

See also - Astoria and Corinthia if you are interested in the best hotels in St. Petersburg.