Airport construction began in 1966. It was opened on March 8, 1974. The airport expanded in subsequent years. About 65.9 million passengers were handled at the airport in 2016. The airport is the largest in France and the second in Europe in terms of passenger traffic.

Charles de Gaulle airport has three terminals. The terminal 2 consists of several parts, which indicated by the letter (2A - 2G). Terminal 2 is connected to terminals 1 and 3 with free rail shuttle. It is possible to move between some of the buildings by foot. 2G terminal is located in a separate building. It can be reached by free shuttle bus from Terminal 1, 2 (A-F) and 3. It is planned to build the terminal 4. 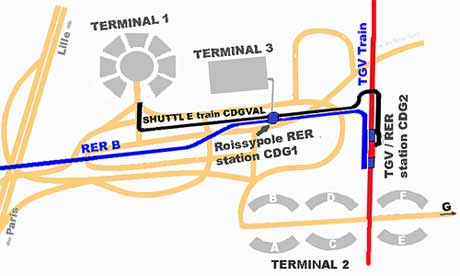 Roissypôle is a complex which houses office buildings, shopping malls, hotels and the RER station, located on the territory of the Charles de Gaulle airport (between terminals 2 and 3).

How to get to Paris from airport

It is possible to get to the airport:

Book a taxi (taxi 🚕) from Paris airport in advance, online.

It is possible to book hotel room in Paris in advance via the Internet.

The airport location marked on the map at the bottom of the page.
You can also see the location of Paris airports, railway stations and tourist attractions on a map.

It is best way to search plane tickets to Paris in the Internet (see the proposals of most popular airlines).