Paris is a large city. Many popular among tourists sites and attractions are located at a great distance from each other. For example, the distance from Notre Dame to the Arc de Triomphe is about 4.5 kilometers and from the Basilica Sacre Coeur (Montmartre) to the Eiffel Tower is about 5 kilometers. Versailles and Disneyland are located quite far from the city center. Therefore tourists usually have to use public transport.

Find the best trip route in Paris - Paris route planner (by public transport or on foot).

The Paris Metro was opened in July 1900. Metro has 14 lines and 300 stations. The total length of subway lines in Paris is more than 200 kilometers long. Located in Montmartre funicular is also under the control of the Metro. Metro stations are available in almost all parts of the city and are located at a relatively short distance from each other. Most of the lines and the metro stations are located underground. The cost of a single ticket for travel on the Paris subway is € 1.90 (2017).
Paris metro map can be seen on the RATP website. 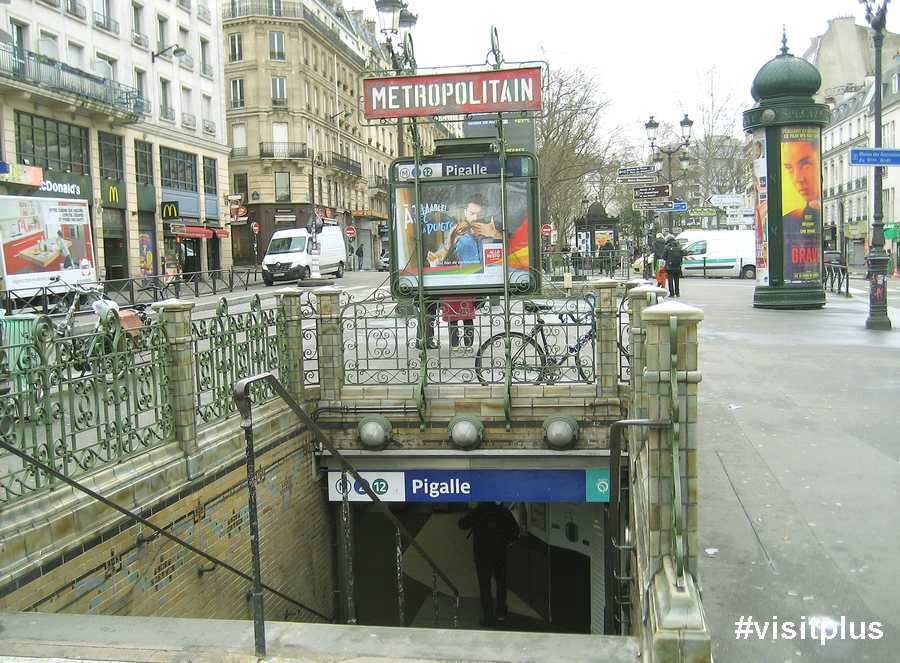 RER is a high-speed rail transport system in Paris (Reseau Express Regional d'Ile-de-France, expresses Network Region Île-de-France). RER has five lines (A, B, C, D, E) and 257 stations, 33of which are located in the city territory. RER stations are available both in the city and in nearby suburbs. The total length of lines is about 600 kilometers. Part of the line is located underground.
Unlike the metro, RER stations are located at a longer distance from each other, and the routes are less curved. This allows traveling over long distances quickly. The fare depends on the distance of travel. The RER has 5 payment zones depending on the distance of travel.

RER and Metro have several transfer hubs. The same tickets (as in the metro and ground transportation) are suitable inside the city (zone 1). It may be convenient to use the RER train to get, for example, in airports of Paris (Charles de Gaulle, Orly and Le Bourget), Versailles and Disneyland.

Paris has an extensive network of bus routes. Buses are a useful complement to the subway. Intercity routes have (usually) two-digit numbers. The routes of buses with three-digit numbers are also operating on the territory of the suburbs. Most bus lines operate from 6:30 to 20:30. There are also night buses (Noctilien).
Paris bus routes map can be seen on the RATP website.

Find the best trip route in Paris - Paris route planner (by public transport or on foot).

For booking hotels in Paris, follow the link please.

Allowed types of connections: bus / bus, subway / metro, metro / RER and RER / RER (within 90 minutes after validation). Transition between different modes of transport is not permitted.
It is possible to by tickets in vending machines and kiosks. It is more convenient to buy packs of 10 tickets (Carnet de 10) for 14.90 euros (2022).

Paris Visite travel card can be very convenient for tourists. The card gives the opportunity to travel by different kinds of transport (not by all) within certain zones. Cards are issued with validity of 1, 2, 3 or 5 days, and for zones 1-3 or 1-5. The card is valid until the end of the day (midnight, 24:00). It is not always cheaper to use the card than buying single tickets, but definitely more convenient.

NaviGo pass (Passe Navigo) is contactless travel card valid for many forms of public transport. The passes can be credited at ticket booths and machines for weekly (from Monday to Sunday) or monthly use. To obtain the card you will need the holder photo 3x2,5. You will get two cards when purchasing (the smart card and identification card). This card may be advantageous, if you come to Paris for more than a few days.

Mobilis travel card is valid for different modes of transport during the day from 00:00 to 24:00. The date, name and surname should be written before using in the appropriate fields. Cards are issued for various traffic zones. The cost is from 7.50€ to 17.80 € (depends on the number of zones, 2022).

Tootbus Paris allow visiting of most of the sights in Paris. You can get off the bus, sightseeing and then go back to the bus (hop-on and hop-off). It is convenient to explore the city from the bus. Buses have four circular routes with stops at the places most popular among tourists. You can buy a ticket for one or more days. Audio guide is available in 10 languages. The ticket price is of 35.10 euros (2022).

The international Charles de Gaulle Airport (Aéroport de Paris-Charles-de-Gaulle, Roissy airport) is located at a distance of 25 kilometers to the north-east of Paris. It is the largest airport in Paris by the number of served passengers. The airport can be reached by RER B train, bus (eg, 350, 351) or by taxi.

Beauvais Airport (Aeroport de Beauvais-Tille) is located near the Beauvais city at a distance about 70 kilometers from Paris. Buses leave to the airport from Porte Maillot station.

You can buy a plane ticket to Paris online.

Here you can order a taxi at the airport or train station in advance.

Rail transport allows to get from Paris to other French cities and to neighboring countries. There are seven railway stations in Paris. You can see the location of train stations and airports on the Paris map.

North Station (Gare du Nord). Trains run to northern France from this station, as well as in directions of the United Kingdom (Eurostar), Belgium, the Netherlands and Germany. It is located in the 10th arrondissement of Paris. The nearest metro station is Gare du Nord. Tourists can get to the Charles de Gaulle airport from this station by RER B train.

East Station (Gare de L'Est). Trains depart from the railway station in France easterly direction (Nancy, Strasbourg, Reims), as well as some international destinations: Switzerland, Luxembourg, Germany, Austria. It is located on the Place du 11-Novembre-1918 square, in the 10th arrondissement of Paris.

Bercy Station (Gare de Bercy). The station is located in the 12 arrondissement of Paris near the Gare de Lyon station. Trains leave from the station towards Italy. It specializes also in auto-trains, which transport travelers' vehicles, such as cars, motorbikes. The nearest metro station is Bercy.

Gare Montparnasse. The station provides train services to the west and south-west of France, including the cities on the tour, Bordeaux, Nantes, Rennes, Brittany and western France (TGV). The nearest metro station: Montparnasse - Bienvenüe.

You can buy a train and bus ticket in advance.

Useful links for those who are planning a trip to Paris: