Champs Elysées (avenue des Champs-Elysees) is the central street of Paris. It is located in the 8th arrondissement of Paris, on the right bank of the river Seine, to north-west of the Louvre. All arriving to Paris tourists feel the need to walk on the Champs-Elysees. There are shops of many famous brands on this street.

Christmas illuminations on the Champs Elysees in Paris will be lit 22 november 2018. The lighting ceremony is scheduled for 6:00 p.m. The event will be attended by the Mayor of Paris, children from the charitable organization Les Petits Princes and event sponsor Karl Lagerfeld. Christmas illuminations will remain on the main street of Paris until January 9, 2019.

Champs Elysees runs from the south-east to north-west from the Place de la Concorde to Charles de Gaulle square (Arc de Triomphe). The length of the street is about 2 km, width about 70 meters. The distance from the Champs Elysees to the Eiffel tower is about 1.6 km.

Champs Elysees can be divided into two parts.
The eastern part of the Champs-Elysées is located between Franklin D. Roosevelt Metro station (Rond-Point) and Concorde square.
This part of the street runs through the Jardin des Champs-Elysees Park. The length of the park is about 750 meters, a width over 200 meters. There are some interesting for tourist places located in the park and next to it, such as the Grand Palace (Grand Palais), Small Palace (Petit Palais), Palais de la Découverte and Palais de l'Élysée. 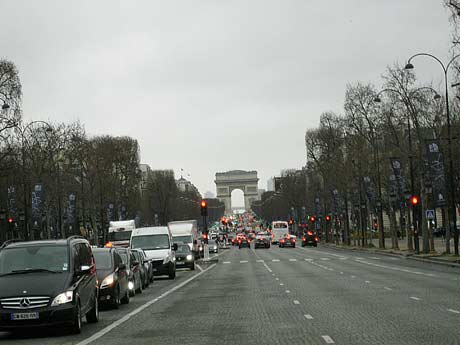 The western part of the street continues to the Place Charles de Gaulle (Arc de Triomphe). The length of this section of the street is about 1.2 kilometers. It is the wide street with wide sidewalks. There are a lot of offices of large companies, shops and restaurants.

Origin of name. The concept of Elysium existed in ancient Greek mythology. It was part of the underworld, with an eternal spring, and where the heroes spend their days without sorrow and worries. There was neither sickness nor suffering. From this word the name of the Champs-Elysees comes.

Place de la Concorde is the largest square in Paris. The square is located between the Champs Elysées (in the west) and the Tuileries Gardens and the Louvre (in the east). In this square, King Louis XVI and Queen Marie Antoinette were beheaded in 1793. In the center of the square, an ancient Egyptian obelisk of Pharaoh Ramses II is located (Luxor Obelisk). The obelisk was located at the entrance to Luxor Temple in Egypt. It was presented to France early 1830s. Luxor obelisk is the most ancient monuments in the French capital. 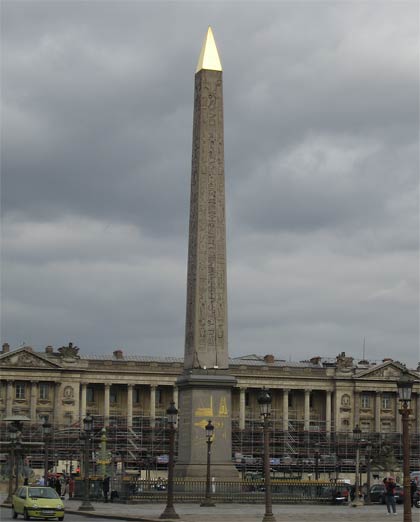 Elysee Palace (Palais de l'Elysee) is the residence of the President of the French Republic in Paris. At the Elysee Palace, French President receives foreign heads of state. The palace is located near the Champs-Elysées, just north of the metro station Champs-Élysées - Clemenceau.

Arc de Triomphe (arc de triomphe de l'Etoile) was built in 1806 - 1836 years by order of Napoleon to celebrate the victories of his army. Dimensions of building: the height of 49.51 m, width 44.82 m, 29.19 m height of the arch. At the top of the arch, there is an observation deck for tourists. There is the tomb of the Unknown Soldier in central span of arch. The arch is located on Charles de Gaulle square

Grand Palace is located on the Avenue Winston-Churchill, between the Champs Elysées and the Seine River. The Grand Palace was built as a pavilion for the World Expo held in Paris in 1900. Currently, the palace is a cultural and exhibition center. The Art Gallery and the Museum of Discoveries and inventions are located in the palace. It hosts exhibitions, fashion shows and other events. 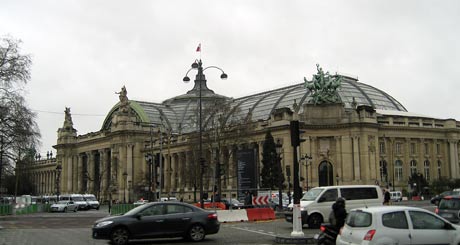 Petit Palais was built as a pavilion for the exhibition held in Paris in 1900, the World Expo. Municipal Museum of Fine Arts is now in the palace (Musee du Petit Palais). The museum has a collection of Greek, Roman and Egyptian art, objects of the Middle Ages and other exhibits. The palace is located on the Avenue Winston-Churchill Street, between the Champs Elysees and the River.

Points of interest locations you can see with map of Paris.

Champs Elysees and the neighboring streets are the best areas of Paris for tourists accommodation. Near the Champs-Elysées, there are several hotels.

Paris | Sights | Guided tours | Events | Accommodation
Useful links for those who are planning a trip to Paris: