Miami International Airport (MIA) is located about 13 kilometers north-west of downtown Miami. It is the busiest airport (in terms of the number of passengers served) in Florida. Most tourists arrive in Miami and to the south of Florida via this airport.

You can buy plane tickets to (from) Miami right now.

You can see the location of the airport on a US map.

How to get to the MIA airport

Miami International Airport has a free MIA Mover transport system for passengers. MIA Mover provides the movement of people between the terminals of the MIA and the central station. The distance from the airport terminals to the station is about 1.12 miles (1.8 kilometers).

Metrorail and Metrobus are the most popular and cheapest way to get to the city center and to Miami Beach from the airport.

The Flyer Airport bus line connects the airport to South Beach (Miami Beach, Lincoln Road). The bus runs seven days a week from 6am to 11pm. Buses run every 30 minutes between South Beach and MIA.

You can also get to other cities (Orlando, Tampa, Washington, Philadelphia or New York) from the central station. 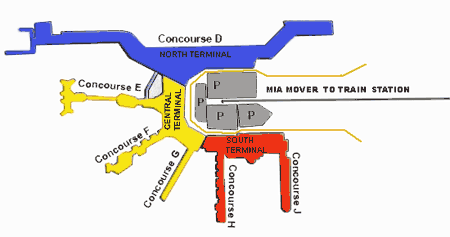 Unfortunately, passengers often have to spend a lot of time at the airport. This happens, for example, if the flight is delayed. You might need a room in the hotel in that case. Near the airport there are many hotels. Some of them provide free airport transfers to their customers.
Miami International Airport Hotel (MIA Hotel) is located in the airport terminal, Hall E.

Some of the hotels located near the airport:

You can check the availability of rooms and book a hotel from your mobile device, online.

There is also a Fort Lauderdale - Hollywood airport located near Miami.