Hotel Metropol is one of the best and one of the oldest hotels in Moscow. The hotel has a very convenient location for tourists. It is located in the very center of the city, on Revolution Square, approximately between the Bolshoi Theater and Red Square. The distance from the hotel to Red Square is 300 meters.

Living in the Metropol Hotel is not only very convenient, but also prestigious. This can also make a difference for some travelers. This hotel is often chosen VIP person to stay in Moscow. 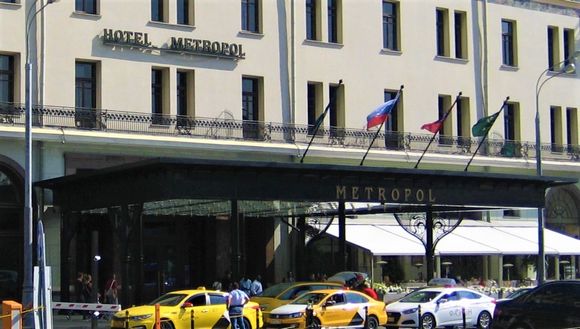 The Metropol Hotel was opened in 1905, two years after the opening of the National Hotel. The hotel at this place existed before, from the middle of the 19th century. Hotel Metropol could be considered the oldest hotel in Moscow, if we consider the existence of the old hotel.

The hotel building is a monument of modern architecture (modernist architecture, Art Nouveau). Famous architects and artists of that time took part in creating the interiors.

Metropol is one of the few hotels where celebrities stay in Moscow. Over the years, many famous people lived in the hotel. Including: Jacques Chirac, Hu Jintao, Giorgio Armani, Pierre Cardin, Elton John, Michael Jackson, Julio Iglesias, Placido Domingo, Francis Ford Coppola, Sharon Stone. (Information about famous guests of the hotel is usually not disclosed.)

Hotel rooms will satisfy the wishes of any lover of travel. In addition to standard rooms, the hotel has suites of various sizes.

Metropol Suite consists of two rooms and is suitable for a comfortable stay, and for business meetings.

The Ambassador Suite consists of three rooms (bedroom, living room with dining area and study). It exceeds the expectations of most tourists and business travelers.

You can find out the cost of living, availability of rooms and get acquainted with the reviews of tourists on the BookingCom.

The hotel has rooms with a capacity of up to 450, where you can hold banquets, meetings, press conferences and other events.

Address: Teatralny passage, 2, Moscow.
The nearest metro stations are: Teatralnaya, Ploshchad Revolyutsii, Okhotny Ryad.
You can see the hotel location on the map.