Zaryadye Park is one of the most visited tourist attractions in Moscow. Most tourists traveling to Moscow include visiting the park in their plans. The park is located in the very center of the city and it is easy to get here from the Kremlin and Red Square on foot.

The park was opened on September 9, 2017. Hotel "Russia" was located on the site of the park before. Why is the park called Zaryadye? Zaryadye means "behind the rows." The area was “behind the rows” of retail stores, and therefore was called “Zaryadye”. Zaryadye is a historical district of Moscow. The first mention of Zaryadye dates back to 1365. 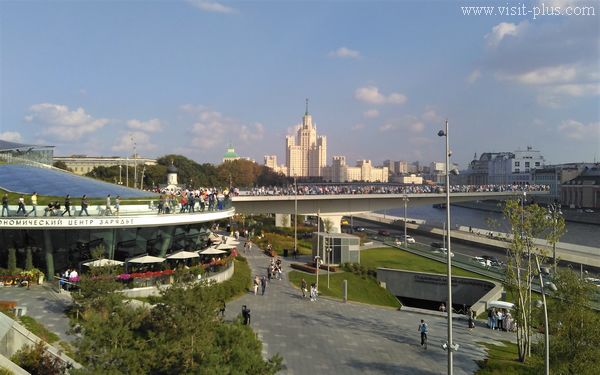 The park is located in the city center, between Red Square and the Moscow River. More precisely, between Kitaygorodsky passage, Varvarka street and Moskvoretskaya embankment. The park covers an area of ​​13 hectares. The park stretches from west to east (along the Moskva River) for about 450 meters, from north to south (between the Moskva River and Varvarka Street) for about 300 meters.

Walking to the Zaryadye Park is very easy. Go from Red Square behind St. Basil's Cathedral, and you will get to the park. Distance to the nearest metro station Kitai-Gorod (south exit) is approximately 150 meters away. Also within walking distance there are the Lubyanka, Okhotny Ryad, Teatralnaya and Ploshchad Revolyutsii stations

There are four landscape zones of Russia in the park: tundra, steppe, forest and swamp. The park has planted more than 700 trees and 7 thousand shrubs.

Near the park there is also a pier, from which you can go on a river tours along the Moscow River.

We recommend visiting this place.