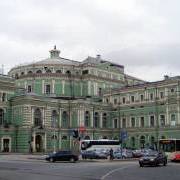 “Mariinsky Theater” is one of the largest musical theaters in Russia. This is the most famous theater in Saint Petersburg. Theater repertoire includes the best works of classical opera and ballet. In recent years the theater has carried out joint productions with the major opera houses of the world: Covent Garden, Opéra Bastille, La Scala, La Fenice, an opera of Tel Aviv and San Francisco. On the Mariinsky Theater stage performs best opera artists of the world.

Saint Petersburg can be considered as the Russia musical theatre birthplace. In the 30th years of the 18th century court opera and ballet performances were held in St. Petersburg. Even then, there was a need for construction of the theater in St. Petersburg.

The main building of the Mariinsky Theater was built by the architect A. Cavos in 1847-1848 and then restored after a fire in 1860. The “Mariinsky Theater” was named after the wife of Emperor Alexander II, Empress Maria Alexandrovna. The theater opened on October 2, 1860.

Tickets for the Mariinsky Theater can be purchased in numerous theater box offices in the city or online at official theater website www.mariinsky.ru

Concert Hall of the Mariinsky Theater

Mariinsky Theater concert hall was opened on 29 November 2006. There is the grate possibility of transforming the scene in the hall. Hall used to show operas and ballets. Hall can seat up to 1110 people. The total volume of the hall is about 1300 cubic meters. The width of the hall - 24 meters, length - 52 meters, the average height - 14 meters.
In 2009 in the concert hall was built the organ, made by French company “Daniel Kern” (Strasbourg).
Mariinsky Concert Hall is also sometimes called the “Mariinsky Theatre 3” (the third stage of the Mariinsky Theatre).

Mariinsky Concert Hall is located about 350 meters from the theater main building at the Dekabristov Street 37.

The second stage of the Mariinsky Theater

The new, second stage of the Mariinsky Theater was opened 2 May 2013. It is located near to the main theater building, across the Kryukov Canal.
In 1997, the theater art director Valery Gergiev appealed to Russian President Yeltsin with a proposal to build a new building for the Mariinsky Theatre. The offer was accepted. The construction project of the new theater building changed several times. There were complications during building construction. The cost of construction has increased significantly, as compared to the original plans. In the near future construction should be completed.

New Mariinsky Theatre stage create a new, better working conditions for artists. Viewers also get a more comfortable environment.
Mariinsky Theater second stage address is “Dekabristov” street 34, Saint Petersburg.
Many city residents are unhappy with the appearance of a new theater building. It did not in harmony with the surrounding space.