There are many interesting cities in Russia. Moscow and St. Petersburg is not all that needs to be seen in Russia. I will tell you what I saw during my trip to Veliky Novgorod.

(On this page, information about my trip to Veliky Novgorod, do not confuse with Nizhny Novgorod.)

If you are in St. Petersburg, one day is enough for you to visit Novgorod. This is a convenient city for lovers of independent travel. There are three types of transport for your choice: train, bus or car.

"Lastochka" is a type of local train in Russia. Trains in Veliky Novgorod depart from the Moscow station. Tickets can be purchased on the Russian Railways website or at the train station. Travel time is approximately 3 hours. Station in Novgorod is located at a distance of 1.3 kilometers from the Novgorod Kremlin. (Russian Railways at one time sold a subscription "Lastochka" ticket “Tourist Weekdays”, there + back to Novgorod at a bargain price.)

Bus transportation on the route St. Petersburg - Veliky Novgorod can be performed by different transport companies and buses can depart not only from the Bus Station, but also from other places. (Please check when buying a ticket.) Bus tickets are now most often bought online. 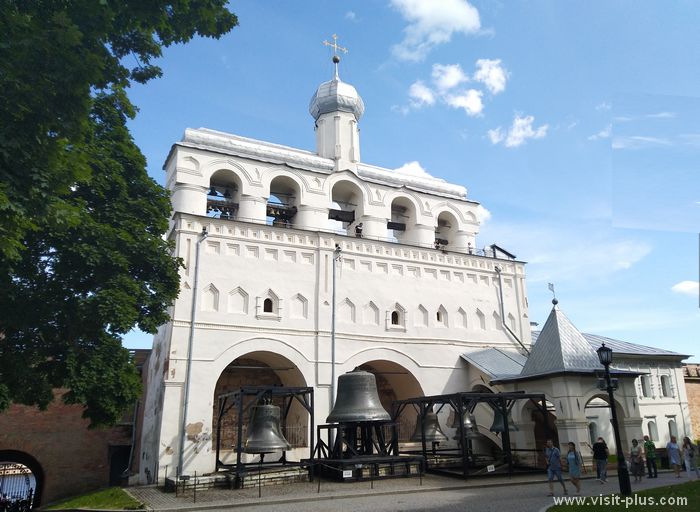 On the photo: belfry of St. Sophia Cathedral.

Many will choose to travel by car. The distance from the St. Petersburg ring road to the Novgorod Kremlin is approximately 180 kilometers. You can go along the Moscow highway, and on the M11 toll road.

🚗 The last time I drove to Novgorod was by car. It was planned to go there along the Moskovsky Highway, and back along M11. As a result (despite the ongoing repairs) the free road seemed quite good and easy, the traffic was loose, “hasty” drivers (probably) all went to a toll highway, and so they returned by free road (why pay extra). The journey time from the Ring Road to Novgorod was 2.5 hours (round trip).

South of the Kremlin, near the Victory Monument there is free parking for cars. There is also a cafe (with a veranda) where you can have a meal, by the river. A parking spot can be found in the neighboring streets.

Another very convenient way to visit Novgorod is to buy a bus tour. You can find offers here. Tours can be either one day or two days.

All tourists must visit the Novgorod Kremlin and the Yaroslav's Court in Novgorod. These attractions are located on different banks of the Volkhov River. Two shores are connected by a foot bridge. There is also a beach near the walls of the Kremlin.

The Novgorod Kremlin is located on the left bank of the Volkhov River. The second name is Novgorod Detinets. The length of the Kremlin from north to south is approximately 550 meters, from west to east - 250 meters. 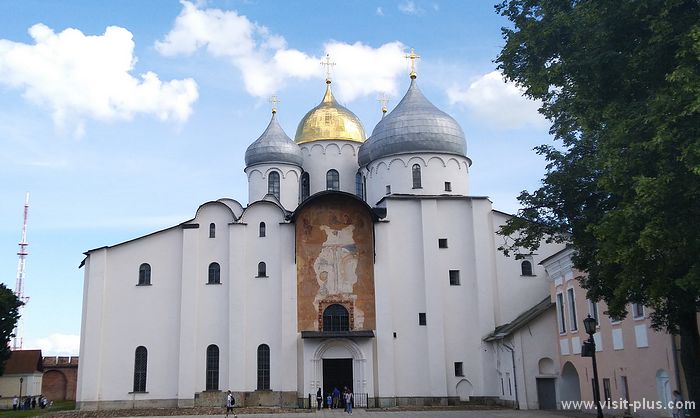 Also on the territory of the Kremlin there is a monument to the Millennium of the state of Russia, on which there are many images of tsars, princes, priests and other people authoritative during the time of tsarist Russia. 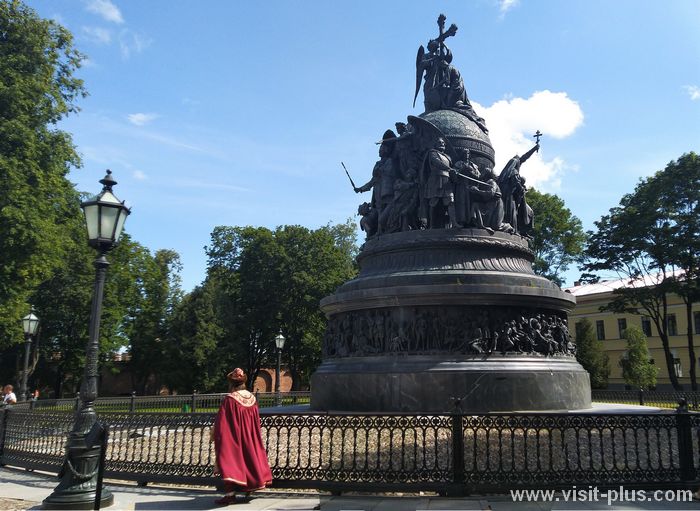 It will be better to buy a guided tour if you are interested in more detailed information. You can buy a tour right on the territory of the Kremlin.
You can walk along the fortress wall, if you buy a ticket.

Yaroslav's courtyard is located on the opposite (right) bank of the Volkhov River. The distance from the walls of the Kremlin (across the bridge) is approximately 300 meters.

On the territory there are several beautiful old churches and the Arcade of the Gostiny Dvor. Almost all tourists come to the right bank to walk around the territory. 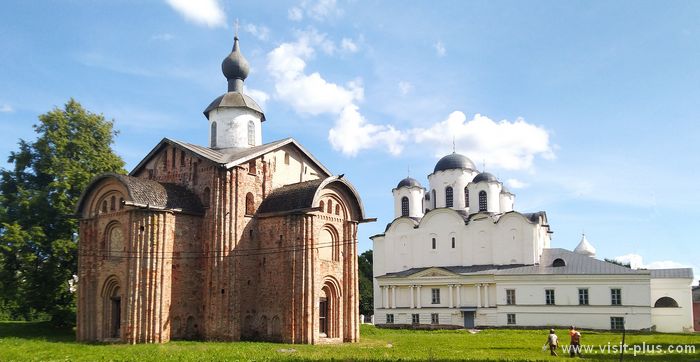 You need to take a walk around the territory of the Kremlin and the Yaroslavov’s courtyard, looking into different corners, looking for interesting places and beautiful views for photos.

Yuriev Monastery is another place that tourists often visit in Novgorod. (The monastery is especially popular with believers.)
According to legend, the monastery was founded in 1030 by Prince Yaroslav the Wise and is one of the oldest monasteries in Russia. 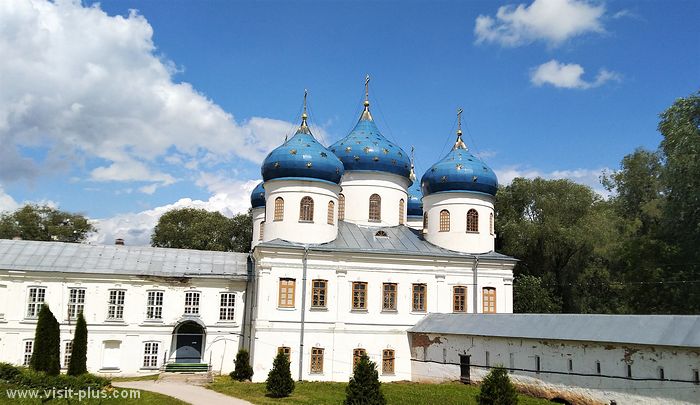 The monastery is located at the confluence of the Volkhov River in Lake Ilmen, at a distance of about 8 kilometers from the city center.

The Museum of Wooden Architecture Vitoslavitsy is located near the Yuriev Monastery. On the territory of the museum are wooden architectural monuments of the 16th century and later.

You can get to the museum (as well as to the monastery) by bus number 7 or by taxi. 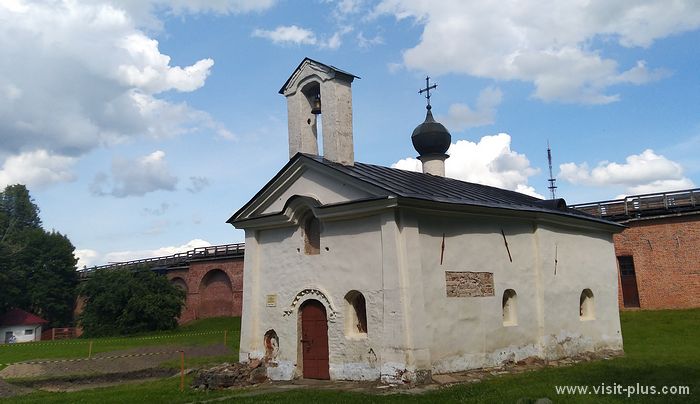 On the photo: Andrei Stratilat Church in Novgorod kremlin.

Stay for another day

During my last trip, I stayed in Novgorod for about 7 hours. In my opinion, Veliky Novgorod is a very interesting city for tourists. There was not enough time to visit Vitoslavits. If you can afford it, it would be better to spend another day in Novgorod.

You can book a hotel here. In the very center of the city there are such (convenient for tourists) hotels such as Volkhov, Sofia, Rachmaninov and Truvor Boutique Hotel.