Nevsky Prospekt is not very suitable for walking, because there are too many cars and therefore too noisy. But you cannot avoid walking along Nevsky Prospekt if you want to see all the main sights of the city.

You can move along Nevsky Prospekt both on foot and by public transport. There are several bus routes (eg No. 24) and trolley buses (eg No. 1) along the street.

Being in the western part of Nevsky Prospect (closer to Palace Square), you can see a gilded spire at the end of the street. This is the Admiralty building. The ship-shaped weather vane is installed on the spire of the Admiralty. It is one of the symbols of the city. The Alexander Garden is located between the Admiralty and Nevsky Prospect. This is a popular walking place for tourists. If, after going up Nevsky Prospekt to Alexandrovsky Garden, you turn right, then you will find yourself on Palace Square. If you turn left, you will go to St. Isaac's Cathedral.

While walking along Nevsky Prospekt, do not forget to look at the neighboring streets. Many interesting places and sights are sometimes just a few steps away from you.

North of the Alexander Garden is the Palace Square - another must-see place. The Hermitage Museum is located on Palace Square (in the Winter Palace). After passing the Winter Palace you will find yourself on the embankment of the Neva. There are berths on the embankment, next to the Palace Bridge. From these berths motor ships leave for Peterhof. You can also buy a river excursion here. If you have time, we recommend crossing the Palace Bridge to Vasilyevsky Island. Eastern end of Vasilievsky Island is probably the most beautiful place in the city.

Isaac's Square is located south of the Alexander Garden. The most famous sights here are St. Isaac's Cathedral and the monument to Peter the Great (Bronze Horseman).

There are also Astoria

🚇 The nearest metro station: Admiralteyskaya. It is located less than 100 meters from Nevsky Prospekt and 300 meters from Palace Square.

At a distance of about 300 meters from its western end, Nevsky Prospect is crossed by Bolshaa Morskaya Street. Along this street you can go to the Palace Square through the arch of the General Staff Building. This section of the street (length 180 meters) is a pedestrian zone. (Here you can often find street musicians, artists, various people trying to make money on tourists.)

At a distance of 400 meters from its western end, Nevsky Prospekt is crossed by the Moika River. This small river can be a good place for quiet walks. If you go along the embankment in a southerly direction, you can walk to New Holland Island (2.2 kilometers).
Going in the opposite direction, you can walk to the Champ de Mars (distance 1.2 kilometers) and the Summer Garden. 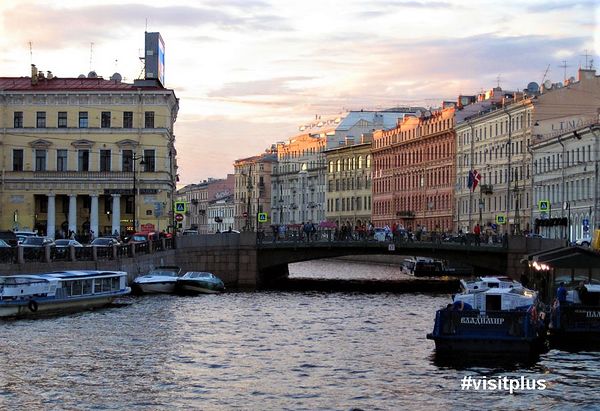 In the photo: the Moika River and Nevsky Prospect (bridge) on a summer evening.

Cafe "Pyshechnaya Zhelyabova 25" is located next to the DLT department store. The cafe is known for keeping the interior and assortment from the times of the USSR.

At a distance of about 700 meters from the Palace Square, Nevsky Prospect crosses the Griboyedov Canal. This is a significant place for tourists.

There are marinas on the Griboyedov Canal, from which river excursions depart. (The ticket can be bought directly at the pier.)

There is a pier on the Griboyedov Canal, from which river excursions depart. (The ticket can be bought directly at the pier.) Several attractions are located near this place. If you walk along the Griboyedov Canal in a northern direction, you will walk to one of the most famous churches in St. Petersburg - "Savior on Spilled Blood". You can buy souvenirs near the cathedral. Artists often sell their paintings there. There is also one of the entrances to the Russian Museum. Nearby are also Mikhailovsky Park, Summer Garden, Engineering Castle. 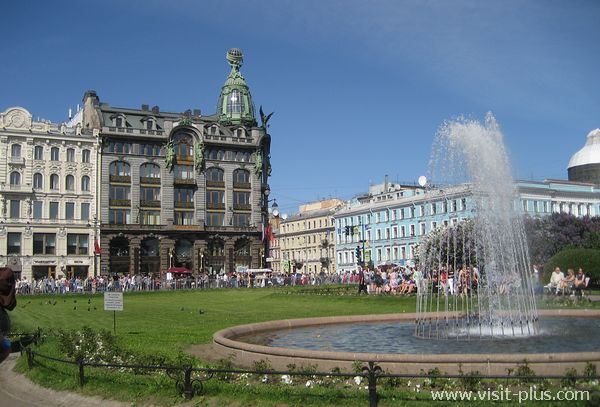 In the photo: a fountain in the park near the Kazan Cathedral. Ahead - Nevsky Prospect, Singer company building, Griboyedov Canal, lobby of the Nevsky Prospect metro station.

Mikhailovskaya Street is about 200 meters long. On this street are located one of the best hotels in the city - the Grand Hotel Europe

and the Philharmonic Concert Hall. The Catholic Church of the Basilica of St. Catherine of Alexandria is located between the Griboyedov Canal and Mikhailovskaya Street. Near this place (on Nevsky Prospect), artists sell their works. (They can draw your portrait too.)

At the corner of Dumskaya Street and Nevsky Prospekt, you will notice the clock tower. This is the Tower of the City Council. 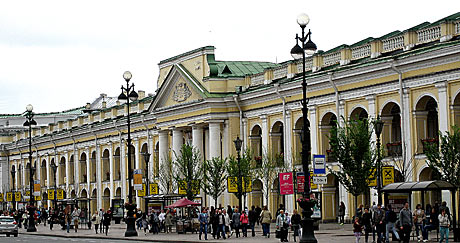 🚇 Here are the metro stations Nevsky Prospekt and Gostiny Dvor.

Ostrovsky Square is located about 150 meters to east from the Gostiny Dvor department store and Sadovaya Street. In the middle of the square is a small park of Catherine and the statue of Catherine the Great. Next to the park is the Aleksandrinski Theater and on the other side of Nevsky Prospekt is the Eliseev Store (the house of the Eliseev Brothers Trading Company). The Akimov Comedy Theater is also located in the same house.

There tourists can usually buy a bus tour on Nevsky Prospekt near the park. (Some sightseeing buses depart from this location.)

Malaya Sadovaya Street is adjacent to Nevsky Prospect opposite Ostrovsky Square. The length of the street is about 200 meters. It has been a pedestrian zone since 1999. 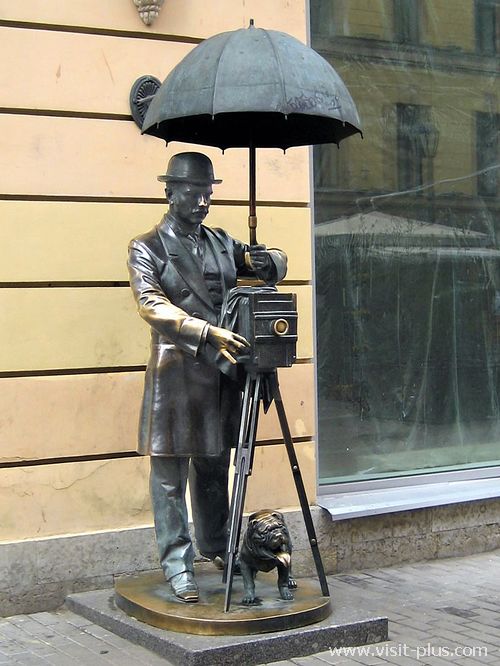 In the photo: this sculpture of the photographer stands on Malaya Sadovaya Street.

If you walk north from Nevsky Prospekt along Malaya Sadovaya or Karavannaya streets, you will come to Manezhnaya Square. Public events are sometimes held here.

A little further, at a distance of 550 meters from Nevsky Prospekt, on the embankment of the Fontanka River, there is the St. Petersburg Circus.

The Fontanka River crosses Nevsky Prospekt at a distance of 1.7 kilometers from Palace Square and 1 kilometer from Vosstaniya Square (Moskovsky Railway Station). 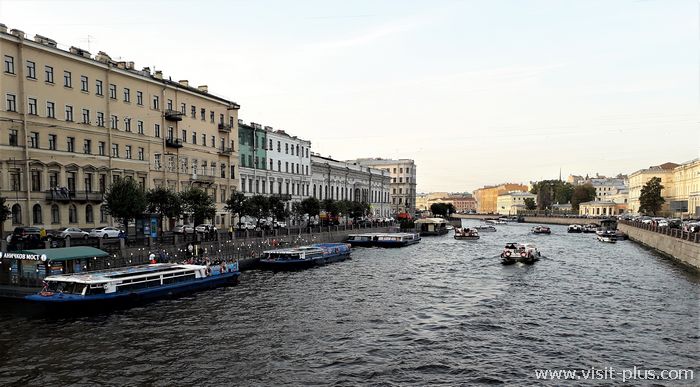 If you walk along the Fontanka River embankment in a northerly direction, you can reach the circus building (550 meters), the Mikhailovsky Castle (800 meters), the Summer Garden (1 km) and the Neva River (1.6 km.).

South of Nevsky Prospekt on the Fontanka River embankment, there are the New Stage of the Alexandrinsky Theater and the Tovstonogov Bolshoi Drama Theater (BDT).

There is a pier on the Fontanka River, from which river excursions depart. (The ticket can be bought directly at the pier.)
(Not in winter.)

You will cross the Fontanka River along the Anichkov Bridge. Anichkov Bridge is considered to be one of the sights of St. Petersburg. The bridge is famous for the sculptural groups "Man taming a horse". Four beautiful sculptures are installed at the corners of the bridge. 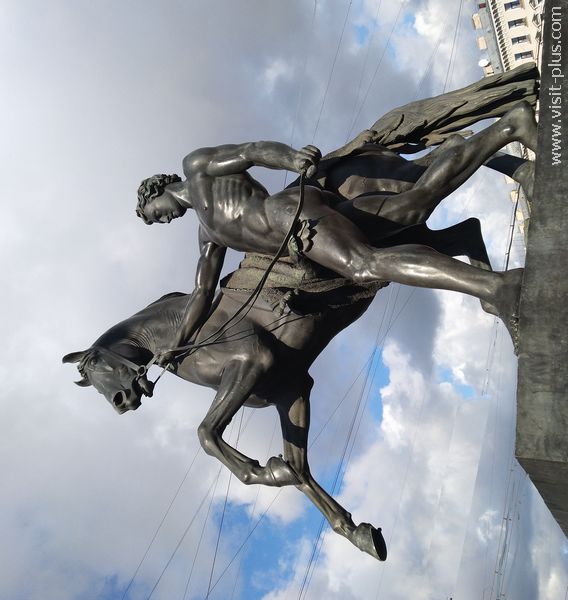 At the intersection of Nevsky Prospekt with the Fontanka River, you cannot fail to notice the pink building. This is the Beloselsky-Belozersky Palace.

There are practically no objects of interest for tourists on the section between the Fontanka River and Vosstaniya Square. There are shops, restaurants, as well as one of the best hotels in the city

Vosstaniya Square is located at a distance of approximately 2.8 kilometers from the Palace Square. Moskovsky train station is located on the square. (Most trains from Moscow arrive at this station.)

There are also located near the square :

North of the Ploschad Vosstaniya (on Ligovsky Prospekt) is the Great Concert Hall Oktyabrsky located.