The city of Sortavala is located in Karelia region, on the northern shore of Lake Ladoga, Russia. This is the second most popular city in Karelia among tourists (after Petrozavodsk). Tourists are attracted to Sortavala by the unique nature of the Northern Ladoga area, the opportunity to take a break from the bustle of big cities in an ecologically clean environment. While in Sortavala, you can also visit Valaam Island and Ruskeala marble quarry (popular tourist attraction).

Attractions and places to visit

Sortavala is a rather old town. The first mention of the settlement dates back to 1468. For some time the city was part of Finland. Several beautiful houses have survived in Sortavala, which may interest architecture lovers.

Historical buildings are located mainly on Karelskaya Street. Nearby, on Lenin Street, there is a beautiful town hall building. ("Berg's House" is a "new building", not a historical monument. There are located café and a shop, popular with tourists.) 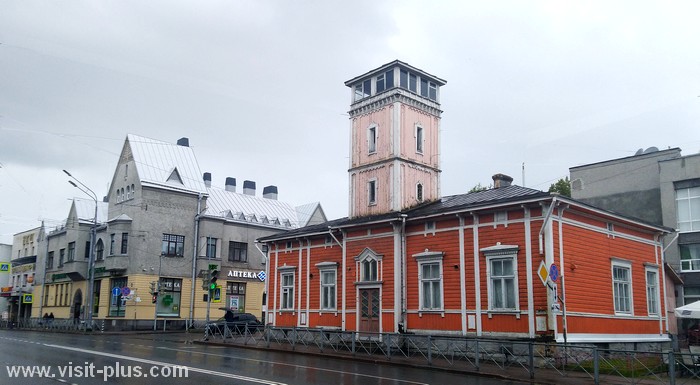 In the photo: an old, wooden fire station and Leander's House in the town of Sortavala, Russia.

The shores of Lake Ladoga are rather rocky, heavily indented in the area of the town of Sortavala. There are many peninsulas and narrow bays (Ladoga skerries). The area is good for boat trips on yachts, kayaks, boats.

Try renting a boat and go on a tour of Lake Ladoga if you are spending your vacation in these places.

Ruskeala Park. Mountain park "Ruskeala" has become a popular tourist attraction not only in the Sortavala region, but throughout Karelia in recent years. Ruskeala is a marble quarry where the extraction of marble was stopped in the early 1990s. In 1998, the quarry was accepted for state protection as a cultural heritage site. The distance from Sortavala to Ruskeala is about 30 kilometers. 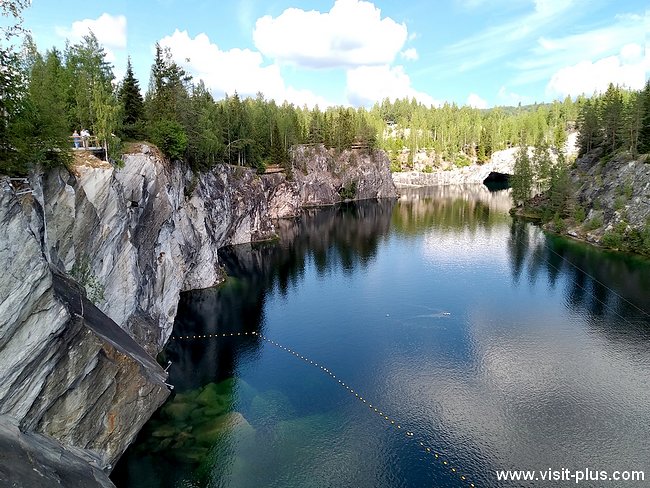 Valaam Island. Valaam Island is located in Lake Ladoga, at a distance of about 40 kilometers from the city of Sortavala. The Valaam Spaso-Preobrazhensky Monastery is located on the island, which is very popular with pilgrims. Small motor ships leave for the island from the pier during the navigation period.

Karelia does not have a bright, tropical nature, blue sea, world sights. Try to take a break from the hustle and bustle during your vacation in Karelia. Slow down the pace of life. Don't rush anywhere. Try to examine the grass on the ground, see an ant in the grass, hear the sound of the wind in the foliage, the singing of birds, the rustle of the waves on the shore of the lake.

The central part of the city can be considered a small area between Karelskaya Street, Kirov Street and the lake shore. At the corner of these streets is Kirov Square (more like a small park). In this area there are cafes, food shops, a hotel. The local administration is also located here.

On the shore of the lake, at a distance of about 350 meters from Kirov Square, there is a pier from which ships sail to Valaam. Here you can also buy a boat tour of the lake.

Tourists usually visit the Berg House, which is located at the intersection of Karelskaya and Lenina streets. It is a café and shop where you can buy local products. Tastings for organized groups are held here, and the cafe has local dishes. 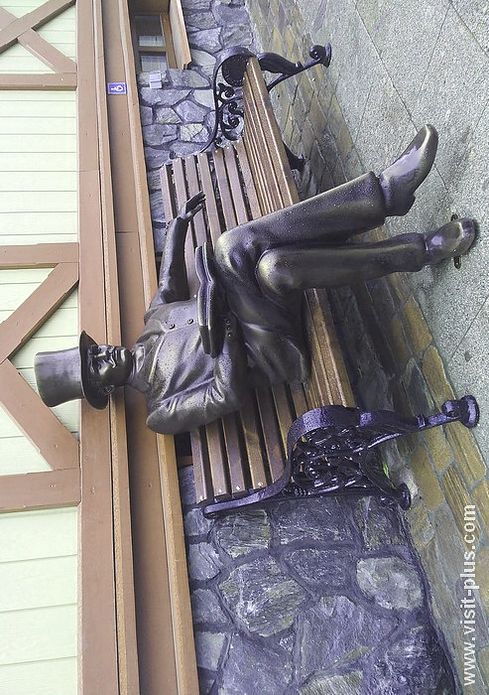 In the photo: this tourist stayed too long in Sortavala. Surely he likes it here. This sculpture is located next to Berg's House.

The regional museum center of the Northern Ladoga region is located at a distance of about 600 meters from the administration building (you need to cross the bridge to the other side of the bay). Address: Ladoga Flotilla embankment, 5, Sortavala.

The museum of the private collection of Kronid Gogolev is also very popular with tourists. Here you can see pictures made using woodcarving technique. From visitors' reviews: The collection is very extensive, there are many works made of wood, so it is very cozy and warm here, like in a fairy tale. The Uronil Gogolev Museum is also located in the very center of the city.
Address: Komsomolskaya street., 6.

The Town Hall building is one of the landmarks of Sortavala. The town hall building was designed in 1882 by the Finnish architect Frans Anatolius Sjöström. The construction was completed in 1885. It is one of the oldest wooden buildings in the city and a beautiful monument of wooden architecture. After the completion of the restoration task, there will be a museum.
Address: Lenin Street, 18, Sortavala (behind Berg's house).

Opposite Berg's House, next to the Seurahuone Hotel, is Väinämäinen Square. This is a small park in which there is a monument to the Rune singer. Väinämöinen is the protagonist of the Karelian-Finnish folk poetic epic “Kalevala”. 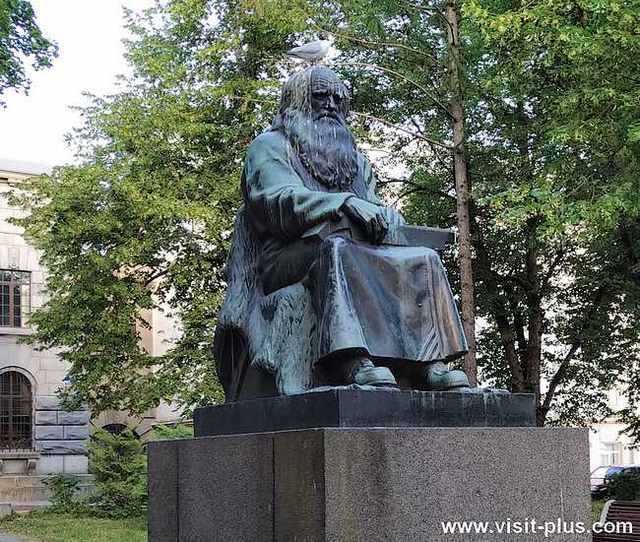 In the photo: the sculpture The Runer Singer playing the kantele in the city of Sortavala.

How to get there

Sortavala can be reached by rail from St. Petersburg and Moscow. Sortavala railway station is located at a distance of about 1.3 kilometers from the city center (Kirov square).

You can get to Sortavala by bus (from Petrozavodsk and St. Petersburg). The bus station is located in the city center, at 1 Kirov Street (200 meters from Kirov Square). The buses following the route Petrozavodsk - Joensuu (Finland) also have a stop in Sortavala.

The pier in Sortavala is located in the central part of the city, at a distance of about 350 meters from Kirov Square. (You can walk to the pier along Komsomolskaya Street.)
In the summer (late spring, summer, first half of autumn), meteors and small motor ships regularly leave the pier to the island of Valaam. Ship movement may be canceled due to weather conditions. 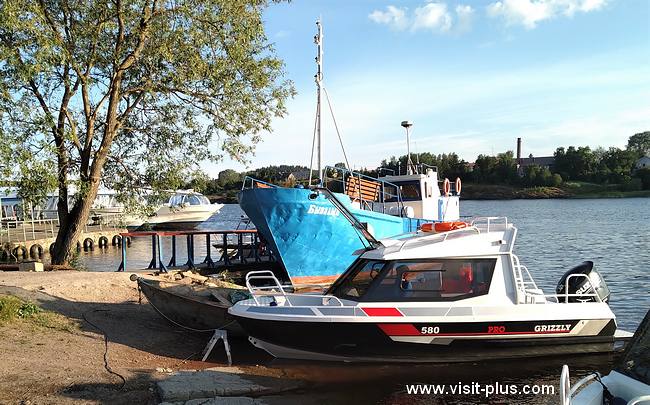 On the picture: Pier in the city of Sortavala.

The nearest airport to the city of Sortavala is in Petrozavodsk (240 km), except for the airports located in Finland (Savonlinna, 100 km).

The most convenient way to travel around Karelia is by your own car.
You can also buy an excursion to Sortavala and not worry about transport and accommodation.