Rhodes Island is located in the Mediterranean Sea, at a distance about 17 kilometers from the coast of Asia Minor (Turkey) and 363 kilometers to east-southeast of mainland Greece. The island is Greece territory. The island has an elongated from southwest to northeast shape. The maximum length of the island is 77 kilometers, maximum width - 37 kilometers.

The largest town and administrative center of the island is the Rhodes city. Rhodes city is located in the northeastern part of the island. There are many small villages and resorts on the island: Faliraki, Lindos, Kremasti, Haraki, Pefkos, Archangelos, Afántou, Koskinou, Embona (Attavyros), Paradisi, and Trianta (Ialysos). In the picture: View from the sea to the Old Town of Rhodes.

Rhodes is one of the most popular summer resorts in the Mediterranean. Tourists are attracted to the Rhodes Island with good beaches, lots of interesting historical sights, and a warm Mediterranean climate. Rhodes Island is washed by two seas, the Aegean and the Mediterranean. Aegean coast of Rhodes (north-western part of the island) is characterized by steady winds. These sites are best suited for windsurfers. The beaches are mostly pebble. Mediterranean coast is more suitable for beach holidays lovers.

Rhodes city is the largest settlement of the island. This is one of the oldest cities in Europe. As it is stated here was situated one of the Seven Wonders of the World, “Colossus of Rhodes” statue (destroyed by an earthquake in 222 BC). The city's population is approximately 80,000 people.

Old Town of Rhodes is included in the UNESCO World Heritage List. This is one of the best preserved medieval cities in Europe. About 200 streets (many of whom do not have names), many old buildings, several museums are located in the old town. Old Town is located in the northeastern part of the city and is adjacent to the harbor.

Cruise ships to the nearest islands regularly go from the passenger port of Rhodes city (situated near the old town). It is possible to buy a tour in travel agencies near the port.

Ferries and catamarans go regularly to the Turkey cities Marmaris and Bodrum from the port of Rhodes. You can make a trip to Turkey for one day (or longer). Tickets can be purchased near to the passenger port and the Old City. 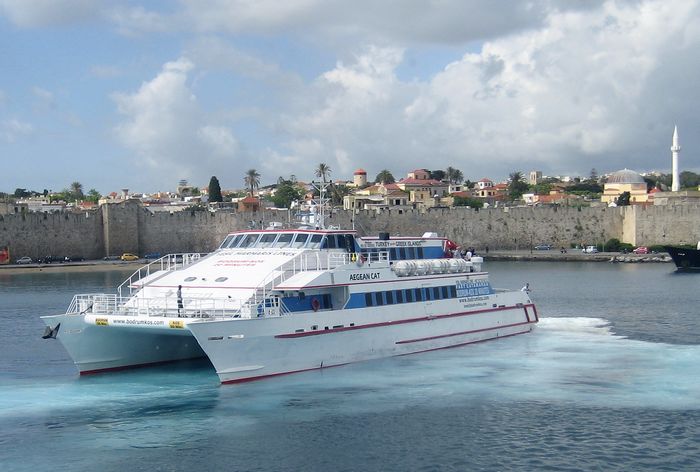 Kuvassa: In the picture: this catamaran leaves from Rhodes to the city of Marmaris.

Tourist Information Centre is located at the intersection of Makariou and Papagou streets, to north of Old Town, near the bus station.
“Mandraki” district is good place for shopping in Rhodes city. It is located to north of the Old Town of Rhodes, between the shores of two seas.
The market place of Rhodes city is situated in the southern part of city. The market sold a lot of fruits, vegetables, fresh fish and seafood. There is a small amount of inexpensive clothing and shoes. (On the other hand of the market is “Chinese shop”).

Rhodes international “Diagoras” airport located 14 kilometers from Rhodes city. From the airport the city can be reached by bus or taxi. 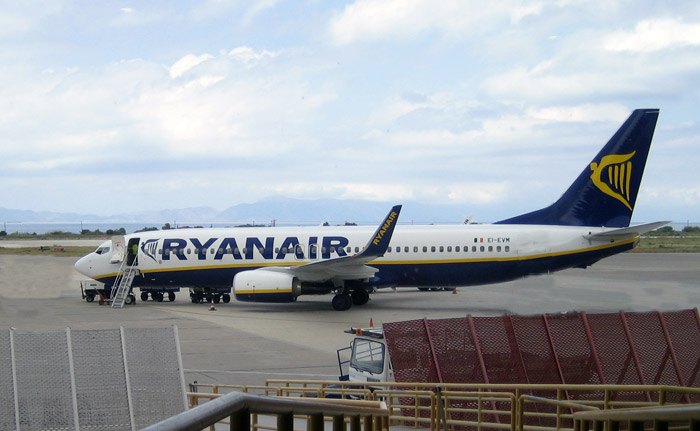 The resort village Faliraki is perhaps the most famous resort on the island of Rhodes. The central beach of Faliraki has a length about four kilometers. It is a beautiful, wide, sandy (in some places found pebble) beach, the main attraction of Faliraki. The beach is equipped with a large number of cabins for changing clothes, showers, toilets. There are plenty of good cafes on the beach (there is also McDonald's near, but in Greece is better to use local food). The cost of renting loungers on the beach in 2012 was 4 euros per day.

There is a small pier (where you can buy a boat trips) to south of the main beach. To south of this place, there is another comfortable small beach, and then a nudist beach in a small bay.
Two streets of the village Faliraki can be considered as central. One is parallel to the central beach, between the coast and the motorway. The second major street (Ermou Street) lay perpendicular to the main street from McDonald's to the motorway. At the intersection of these streets is a travel agency offering cheap tours. On these two streets are many shops, cafes, car rental firms (there are also night clubs and striptease). In the photo: Faliraki holiday village.

There is lively nightlife after sunset. After dinner the tourists go out of the hotels and walk along the streets and shops. After closing the shops fun continues in the many cafes and restaurants. Fans of bars and nightlife go to the streets of the city after 10 pm. Families with children are already returning to hotels.
You can take a taxi (it takes about 15 minutes and costs about 20 euros) to get to Faliraki from Rhodes town. The cheapest way is by public transport. The bus goes to Faliraki for about 30 minutes. Ticket price in 2012 was 2.2 euros. Faliraki can also be reached on the transit buses Rhodes - Lindos.

Useful services to get ready for your trip to Rhodes.

Ialysos (Ialysos, also known as Triánta) is the second largest city on the Rhodes island. It is located eight kilometers west of the city of Rhodes, on the northwest coast of the island. Ialysos developed as a tourist destination. There are several hotels and resorts on the coast (including the village of Ixia). Winds blowing from the sea have made this place popular with windsurfers. Here are the remains of the ancient city and the museum of mineralogy and paleontology.