Hotels near the central beach in Sochi

The building of the sea station is one of the symbols and attractions of Sochi. This is the very center of the city and almost all tourists visit this place and consider it necessary to walk along the embankment. “Mayak” (Lighthouse) beach is located to east of the sea station. It can be considered as the central beach of the city. The hotels located near this place will be the best place to stay during holiday in Sochi for many tourists.

We offer you a short overview of the hotels located near the promenade and the central beach. Not far from these hotels, there are also located: the concert hall "Festivalny", the Winter Theater and the Th Sea Station. You can choose the hotel you like, find out the cost of accommodation and immediately book a room. (There may not be free rooms in the midst of the holiday season.)

The distance to Sochi railway station is approximately 2 kilometers, to the international airport of Sochi (Adler) is 25 kilometers. 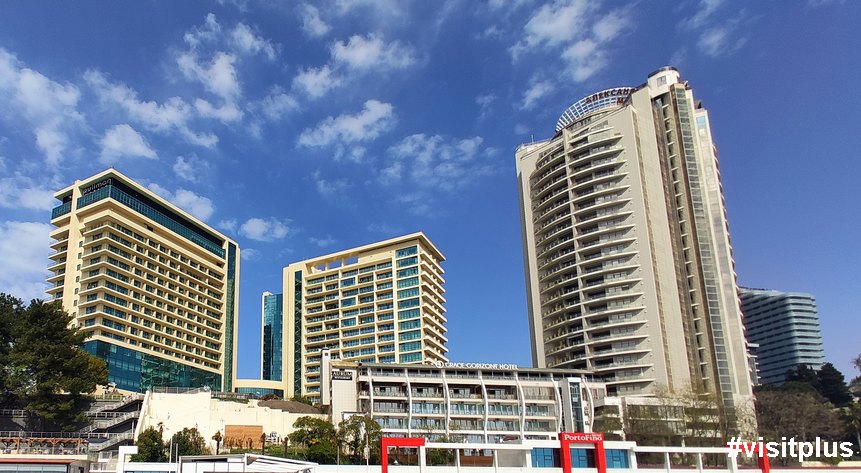 Hyatt Regency Sochi (5-star hotel). It is one of the most comfortable hotels in the center of Sochi. The distance to the beach is 170 meters. The hotel has 198 hotel rooms, including 170 standard rooms and 28 suites. Many rooms offer views of the Black Sea. The hotel has an outdoor heated pool, gym, fitness center, conference facilities and corporate events.
Address: Ordzhonikidze street 17, Sochi, Russia.

Hotel «Pullman Sochi Center» (5-star hotel). It is one of the most comfortable hotels in the center of Sochi. The distance from the hotel to the beach is less than 200 meters. The hotel has 150 comfortable rooms with balcony (view of the sea or the city). Also at the disposal of customers: a Mediterranean restaurant, a 24-hour bar, a business center, a wellness center with a pool on the 16th floor and with panoramic sea views. (The outdoor pool is open during the summer season.)
Address: 11A Ordzhonikidze Street, Sochi, Russia.

Marins Park Hotel (4-star hotel) is located between the hotels listed above. The hotel has both standard rooms and suites, a Wellness center with a swimming pool, a beauty studio, a restaurant, a cafe, and premises for business events.
Address: Morskoy pereulok 2, Sochi, Russia.

Mercure Sochi Center Hotel (4-star hotel). The hotel has 200 comfortable rooms overlooking the city or the sea, a swimming pool, a spa, a restaurant and a bar.
Address: 11A Ordzhonikidze Street, Sochi, Russia.

Bounty Hotel (3-star) is also located next to the beach, on the first line. The hotel has rooms that provide a different level of comfort, from economy class rooms to suites.
Address: Primorskaya Street 4B, Sochi, Russia.

Sanatorium named after Maurice Torez (2 stars). The Moris Thores health complex is located next to the beach on the first line. The hotel has 21 rooms, including 3-room "Lux" apartments, 2-room "Comfort" apartments and "Standard" rooms. Guests of the complex can take advantage of a wide range of health and beauty services.
Address: 9 Ordzhonikidze Street, Sochi, Russia.

Hotel on Ordzhonikidze 8. The hotel has single, double and four-bed rooms, as well as a room with a kitchenette.
Address: 8A Ordzhonikidze Street, Sochi, Russia.

Sanatorium "Chernomorye". "Chernomorye" sanatorium is located in the central part of the city, near the "Winter Theater". You can see the peaks of the Main Caucasian Range and the Black Sea from the balconies and terraces of the building. Distance to the beach is 250 meters. The hotel has 51 rooms, including "Standard", two-room and three-room suites and apartments.
Address: Ordzhonikidze Street 27, Sochi, Russia.

Primorskaya Hotel (2-stars). The hotel has 760 rooms. The hotel has both low-cost rooms and 2-room suites. The building of the hotel was built in 1936 and is an architectural monument.
Address: Sokolova Street 1, Sochi, Russia.

Near the Riviera beach

At a distance of about one kilometer west of the Marine Station is another popular beach - Riviera Beach. Nearby are: the Riviera Park, the Oceanarium "Secrets of the Ocean", the Green Theater.

The nearest to the park Riviera hotels:

You can choose and book a hotel room online without leaving your home. It should be noted that if you plan to visit Sochi during the holiday season, then take care of the place to stay better in advance.

We have more information for you about places to stay in Sochi and Adler on VISIT-PLUS.