The Central Museum of Armed Forces

The Central Museum of Armed Forces in Moscow has large collection of military equipment, weapons, documents and other exhibits associated with the army. It is one of the largest military-historical museums in the Russia. It will be interesting to visit the museum for those interested in weapons, military equipment and history of the Russian and Soviet army. The museum's exhibits occupy 24 halls. Samples of heavy weapons and military equipment are placed on the open ground. 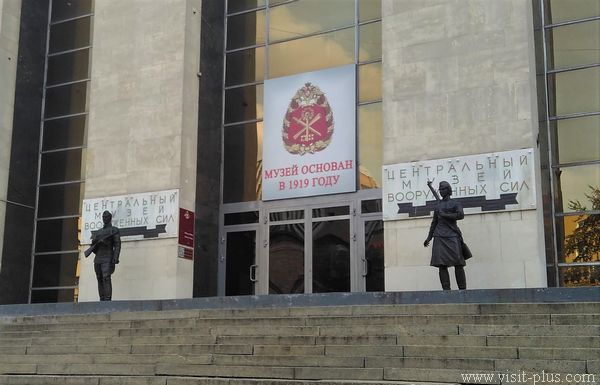 Museum of the Armed Forces was established in Moscow in December 1919.
There are many different types of exhibits in the Moscow Armed Forces Museum: weapons, battle flags of the Russian and Soviet army, trophy banners, documents, paintings, photos, awards, personal belongings of officers and soldiers, items of equipment and uniform of the Russian army and the armies of other countries (including the trophy). More than 150 pieces of military equipment and weapons are situated on the open area of the museum (artillery, tanks, missiles (including the U.S., Pershing 1A)).

It is possible to buy models of military equipment, books and souvenirs in the museum shop. There is also a military cuisine restaurant.

Presented in the museum exhibits are grouped by subject and placed in 24 halls. The total area of the museum rooms is about 5000 square meters.

There is also memorial museum cabinet of Marshal Zhukov in the building of the General Staff of Russian Federation Armed Forces (affiliated with the Museum).

The museum official website: www.cmaf.ru
Address: 129110, Moscow, street Soviet Army, 2.
The nearest metro station: “Dostoevskaya”.
You can see the museum location on the map of Moscow.

If you have visited the Museum of Armed Forces in Moscow, share your impressions in the comments at the bottom of the page.